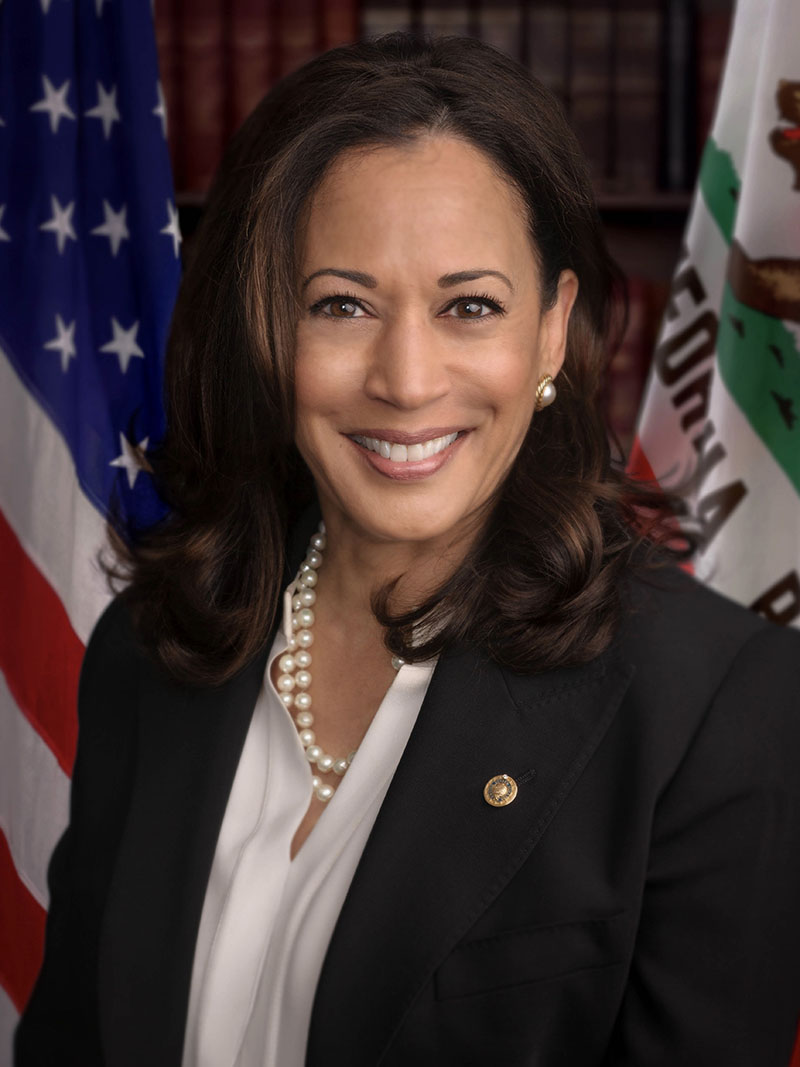 Kamala Devi Harris has been front and center in the media since August 11, 2020 when Presidential Candidate, former Vice-President Joe Biden, chose her as his running mate in the 2020 election.  She is the first African American and Asian American female to be selected as the running mate of a major presidential candidate.  Biden explained that he chose Kamala Harris because he felt that she was the strongest choice for the job and was prepared for the demands of running a national campaign as she had recently conducted her own campaign for president of the United States.

Kamala Harris was born October 20, 1964 in Oakland, California.  Her father emigrated from Jamaica in 1961 and her mother emigrated from India in 1960.  Both parents were highly educated.  Her father taught at Stanford University, while her mother was a breast cancer scientist.  She has one younger sister, Maya Harris.  Kamala went to a predominantly black Baptist Church while growing up, as well as a Hindu temple.  She identifies as African American.  Kamala’s parents divorced when she was seven and Kamala and her sister stayed with their mother and visited their father regularly.  While visiting their father in Palo Alto, California, on the weekends, the neighbourhood children were not allowed to play with Kamala and her sister because they were black.  Kamala graduated from Westmount High School, Quebec, in Montreal Canada where her mother had accepted a teaching position at McGill University.

Kamala studied political science and economics, and she received her B.A in 1986.  She then earned a law degree from Hastings College in 1989.  Kamala began her career working as a deputy district attorney in Oakland progressing to district attorney in 2004.  She prosecuted homicides and drug trafficking cases as well as gang violence and sexual abuse.  Throughout her political career Kamala gained a reputation for her “tough on crime” policies.

In 2009, Kamala, along with Joan O’C. Hamilton, wrote a book, Smart on Crime, which became a model for dealing with criminal recidivism.  In 2016 she became California’s third female senator, the second African American woman, and the first South Asian American to serve in the United States Senate.  She gained national recognition after her powerful questioning of Jeff Sessions and Brett Kavanaugh of the Trump administration during the Senate hearings.  Harris’ Memoir, The Truths We Hold: An American Journey was published in January 2019.

Kamala met her husband, Douglas Emhoff, an entertainment lawyer, on a blind date.  Emhoff was divorced with two children.  They connected and were married shortly after.  Emhoff was a strong supporter of his wife as she ran for the Democratic nomination for President of the United States in the 2020 election.  She ended her campaign in 2019 due to lack of funding.