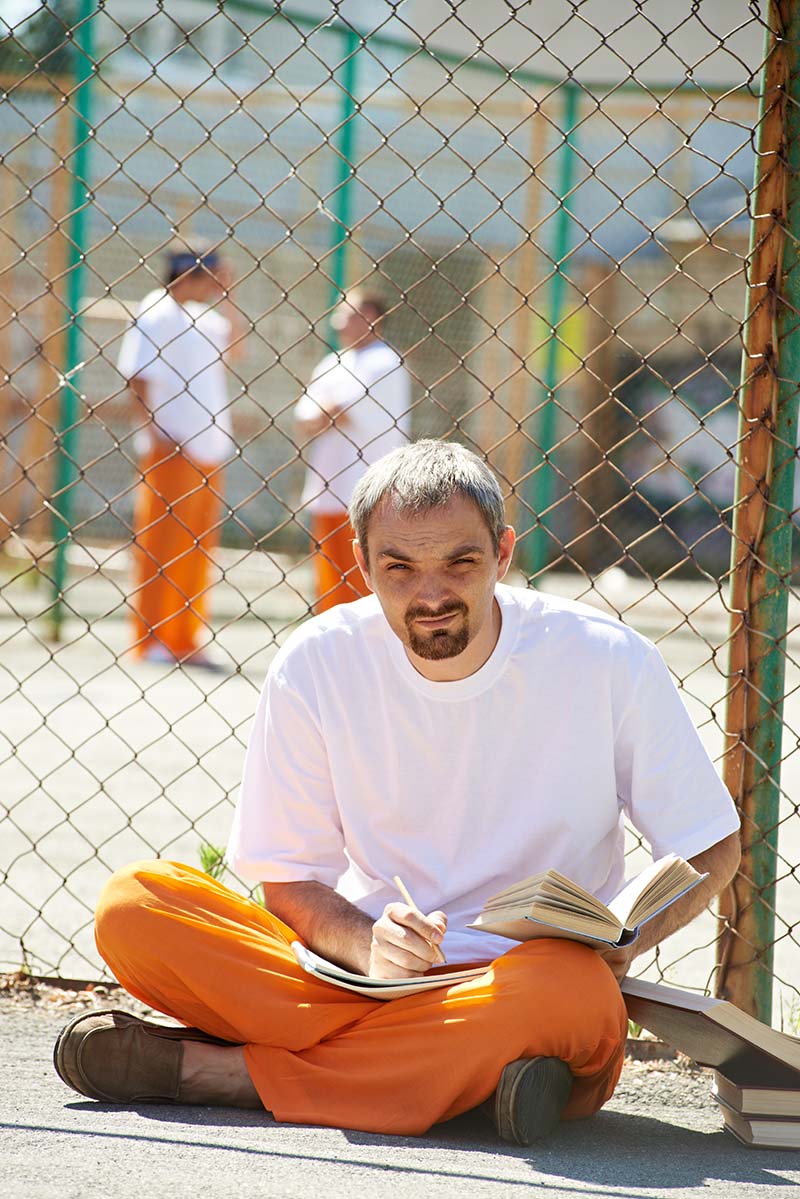 Intelligent prisoner sitting in front or back yard. He making an abstract of book. Frowning man looking at camera. Its photo illustrating lifestyle of man in the prison and his education. It is perfect for using it in commercial and advertising photography, reports, books, presentation

The accessibility of online education is often a lifeline for many students, including those with chronic illnesses and disabilities, as well as familial and work commitments.  However, for others, such as incarcerated students, online education can prove to be a barrier instead.

For example, AU’s recent transition to e-texts has had a mixed reception from the majority of AU’s diverse student body.  Although some welcome the change, others, such as AU students currently serving sentences in carceral institutions, have been adversely affected.

With limited to no access to the internet or items, such as laptops and iPads’s, AUs’ University’s eText Initiative, which is part of a longer-term initiative stating back to 2002 to “assist the university in attaining its commitment to being a fully online university and offering enhanced access and flexibility to quality learning,” will negatively impact incarcerated students.

Further transition to a fully online environment, despite the acknowledgement of AU’s online framework, will create increased hardships for those already struggling to complete a degree in less than ideal circumstances.

However, this issue is not limited to AU.  Increased interest into incarcerated students pursing higher education has come into prominence with the recent PBS documentary, College Behind Bars, which follows inmates who are part of the Bard Prison Initiative from New York’s Bard College.

Carceral (ie. in prison) education in the United States has been a source of controversy throughout history.  In 1994, incarcerated individuals became ineligible for the federal Pell Grants Program, which offered financial aid for low-income students.  This “decimated the educational infrastructure inside prisons throughout the country, with universities withdrawing their programs because of a lack of financial support.”  In 2016, the Second Chance Pell Pilot Program came into being, as a way to provide grants to up to 12,000 incarcerated students.  In 2020, the program has more than doubled the numbers of schools participating.

In Canada, while most incarcerated students are required to pay for their post-secondary education, there are also exceptions under certain criteria, such as when “participation is included as part of a larger federal/provincial arrangement to provide these programs within the institution,” according to Corrections Service Canada.

On their website, AU states that its “goal is to remove barriers to university education for adults who are unable or unwilling to attend conventional campus-based institutions,” which includes incarcerated students.  They state, “Many inmate students are highly successful, but because of the difficulty of studying within a prison, many are not.  Prison environments are noisy and dangerous, and there are serious obstacles to overcome.  A student who does succeed is to be encouraged.”

Similarly, The Ephesus Project allows federally incarcerated students to complete The King’s University courses in a variety of disciplines, including English, history, theology, philosophy, and physics, mathematics.  In this program, professors volunteer to teach incarcerated students in-person or via correspondence.

For incarcerated individuals who pursue education behind bars, the rates of recidivism become much lower, with a variety of benefits including the creation of stronger communities, post-release employment, and a sense of purpose and self-confidence.  According to the Prison Studies Project, studies have revealed, “higher education in prison programs reduces recidivism and translates into reductions in crime, savings to taxpayers, and long-term contributions to the safety and well-being of the communities to which formerly incarcerated people return.”

Unfortunately, even for those with a degree or diploma, finding employment with a record can be difficult.  It is feared that this further digitization of education will adversely affect an already marginalized population.

In a statement to The Voice Magazine, Isabelle Robitaille, Communications Advisor for the Communications and Engagement Sector of Correctional Service Canada stated, “The Correctional Service Canada (CSC) is mandated to offer education programs that address offenders’ educational needs.  These programs aim to increase their literacy, academic and personal development skills.  CSC prioritizes programs that assist offenders in obtaining a secondary school diploma or equivalent and also supports eligible offenders in their pursuit of post-secondary studies through accredited colleges and universities, such as the Athabasca University, in which a small number of federal offenders are currently enrolled.”

She continued, “CSC is aware of the increase of digital technology in post-secondary programs and continues to explore ways of introducing technology to meet offenders’ reintegration goals, including education.  At this time, offenders incarcerated in federal correctional facilities have access to computers to complete assignments electronically.  These computers do not have direct access to the Internet or e-mails; however CSC staff provide assistance to inmates in completing and submitting online forms, printing and providing course materials, collecting and sending completed assignments, scheduling and supervising exams, and so forth.”

Robitaille concluded, “CSC prioritizes offender access to education to prepare them for a successful reintegration.  As such CSC continues to explore opportunities to establish additional partnerships with universities, colleges, and agencies to enhance inmate access and capacity to pursue post-secondary studies.”

It can be noted though that without live access to the internet, it can be difficult for incarcerated students to participate in any sort of interactive course elements, such as video chats, or even student forums.

The Voice Magazine also reached out to Dr. Alexa DeGagne Assistant Professor of Women’s & Gender Studies and Vice President of AU’s Faculty Association about what can be done to help incarcerated students complete their education given their limited online access and resources.  In a phone interview, it was mentioned that a group of AU faculty members and employees who have interacted with and taught incarcerated students has been studying university policies and barriers to student accessibility resources.  Some ideas brought up included the possibility of waiving tuition, including free courses and textbooks.

Dr. DeGagne stressed three main issues, the first of which was monetary access.  Incarcerated students do not have access to income, which makes it difficult to pay for courses.

Secondly, a fully online institution is “a huge barrier for folks who are incarcerated.”  The group has tried to “think of ways of printing off the courses” to send students materials, as an alternative to depending on unreliable and infrequent online access.  An idea would be for the university to fund these printing costs instead of a reliance on family and friends, which “can be inaccessible if they don’t have the means.”

Thirdly, Dr. DeGagne mentioned the importance of accessible course design.  Courses must be designed in a such a way to give all students access, including those who cannot go online, which applies to students living in rural areas as well.

Dr. DeGagne stated, “AU has had a long history of access for incarcerated students,” partly a result because materials were printed.  Although AU is “trying to be more accessible,” in many ways, they are becoming inaccessible to a group that they have historically served.  It is important to consider “how we can make it that students have access to courses that we are providing” and “make sure everything on our end is as accessible as possible.”  This is a difficult topic, as all carceral institutions have different protocols on a federal and provincial levels; it can be a process navigating these systems.

For students interested in further exploring this topic, consider CRJS 491: Offender Rehabilitation, which considers “a variety of areas that contribute to offender recidivism,” as well as WGST 421: Advocacy from the Margins to understanding global injustices faced by marginalized groups.