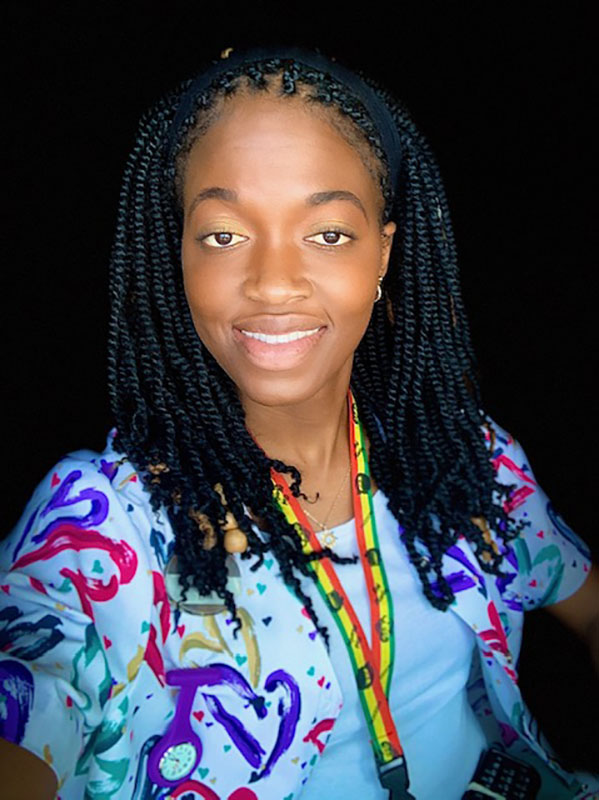 Calgary’s Nastassia Aikman is a brand new AU student who started her Post LPN – Bachelor of Nursing program this October.  She stated, “Before starting the PN program, I had researched bridging programs and found that AU had the program I was looking for.  A couple of my former instructors and nurses I met along the way also recommended AU.”  Before AU, Nastassia completed “the PN (Practical Nurse) program at Medicine Hat College” (MHC) calling it “an amazing experience.”  She stated, “The instructors were fantastic, and I made some great friends during my time at the college.”

Nastassia was “was born and raised in Jamaica,” graduating from high school before immigrating to Calgary on March 9, 2009.  She has one older brother and one younger, as well as “2 nieces from my older brother and a nephew from my younger.   My mom is still alive and living in Jamaica, but my dad passed away a few years ago.”  As for the rest of her family, many continue to reside “in Jamaica with the exception of an aunt who resides in the USA, who is a professor, and a cousin living in Japan who is also an educator.”   With no pets, but the possibility of a cat in her future, Nastassia spends her time working as “an LPN (Licensed Practical Nurse) …  at a vibrant retirement community in SW Calgary.”

In her spare time, Nastassia enjoys reading, stating “[W]hen I’m not working you will find me reading a good book.”  She stated, “I have this odd way of reading multiple books at a time, so I am currently reading Orphan Train by Christina Baker Kline and A House in the Sky by Amanda Lindhout and Sara Corbett.  Orphan Train is a powerful novel recounting emotionally traumatic events in American history, involving orphaned and abandoned children who were transported on trains across the Midwest.  These children endured deprivation and abuse through a system that was created to assist families who were unable to provide for their children.  It is a riveting story about historical events of trial and triumph.  A House in the Sky is about a 15-year-old Canadian girl, also one of the authors of this book, who was held captive in Somalia for months.  It is a very gruesome read, but it also a story about trial and triumph.  Both are great reads so far and I would recommend them to anyone who is interested in historical events.”

In addition to reading, Nastassia stated, “I also enjoy cooking, exercising, watching basketball, visiting parks around the city, writing and performing original pieces of poetry in my Jamaican dialect (Patois) around the city, singing in my church choir, hanging out with friends who have become family, catching up with my family back home, watching TV shows, movies, and resting.”

As for extra-curriculars, she “played co-ed soccer for a few years” but has recently turned in her cleats “prior to returning to school.”  In addition, Nastassia stated, “My church and I volunteer at the Bowden Correctional Institution a few times a year, but, due to the pandemic, we have not been able to do so this year.”

Nastassia revealed that she is currently re-watching Black Panther and Glee, stating “I am re-watching Black Panther to honor and remember superhero, Chadwick Boseman.  Boseman’s sudden death rocked us all.  Seeing the portrayal of a Black superhero and king on our TV screens inspires Black girls and boys like myself to dream and believe in ourselves.  The Black Panther is a fictional character, but it sparked a movement within the Black community.  Representation matters and it is extremely important.  This movie, that had the first all-Black cast, provided roles and opportunities to Black individuals who were once denied these positions.  The Black Panther movie teaches me that dreams are possible.  They might take several years to come to fruition, but anything is possible.  The color of your skin or where you were born should never be a deterrent for one to pursue their goals.”  She continued, “I am also re-watching Glee to honor the memory and legacy of the late Naya Rivera who drowned accidentally this July at a lake in California.  Rivera is an iconic figure of representation for the Afro-Latinx population.  Naya excelled in any role she was asked to play.  Growing up in Jamaica, I never saw actors and actresses who looked like me in lead roles.  So, seeing a young Black girl on a hit TV show who looks like me not only inspires me, but so many little Black girls and boys.  Naya made us believe that anything is possible with hard work and focus.  I am re-watching Glee as a personal reminder that your dreams are attainable regardless of the minority group you find yourself in.”

Nastassia has three main dreams on her bucket list, stating, “Firstly, I would watch a live basketball game, courtside while LeBron James is playing.  I am the biggest LeBron James fan.”   She continued, “Secondly, I would travel to Jamaica and or the Middle East or any third world country to volunteer as a nurse.  I have always wanted to give back by providing health care services to individuals who are unable to afford them.  We are very fortunate here in Canada to have health care services and benefits that so many countries are unable to provide for their citizens.”  The third goal is to visit Europe, as well as the Caribbean adding, “I would also go on a Caribbean cruise with family and friends.”   Nastassia continued, “I would also start by fostering a child and possibly moving toward adoption.  There are so many children who are in need of a family and a loving home and if I am able to help one child, I know I will have made a difference in this world.”

When asked if she could choose one place to live, Nastassia chose Paris, stating, “I have always been drawn to Paris, ever since I was a small child.  Paris is known for its culture, fashion, shopping, and art and has been dubbed the ‘City of love and the City of lights.’  I would love to experience the romantic vibes of the city and visit some of the historic sites and if I am living there, then I get to see it every day.”

As for meeting any person, – current, historical, or fictional – Nastassia mentioned Florence Nightingale, revealing, “As a little girl growing up in rural Jamaica, I always wanted to be a nurse.  I was first introduced to Florence Nightingale, also known as the ‘Mother of nursing’ and ‘The Lady with the Lamp’ at a young age and she has been an inspiration ever since.  Florence’s research, theories, and principles have guided nursing practice for many years and still govern modern day nursing.  I read one of her books ‘Florence Nightingale to Her Nurses’ in the spring of this year and I must say that I have a newfound motivation and desire to pursue this dream and be the best nurse I can be.  Florence’s passion and commitment to nursing is truly unmatched and admired by so many.  Florence was sick and bedridden, but she spent the last few years of her life educating and molding young minds into greatness.  Without Florence, nursing wouldn’t be what it is today, and nurses wouldn’t be who they are or where they are today.  I would love the opportunity to tell her thanks for everything she has done for the healthcare system, specifically modern nursing.  And I would relish the opportunity to be able to learn under her tutelage.”

Nastassia’s proudest moment to date has been walking across the stage during her PN program graduation at MHC.  She stated, “I remember vividly completing the last night of my preceptorship at the Brooks Health Center.  My preceptor Carla, called me into the hospital chapel approximately 0100, gave me my completed final evaluation and told me I could go home.  I had a couple hours left in my shift, but she told me I had done so well, she knows I must be exhausted, so I can go home and rest because I have met and exceeded all the requirements.  I remember standing there speechless.  I was so relieved to have completed the final phase of my program, but I also remember being in disbelief that I had finally accomplished my goal.

“I packed my bag, expressed my gratitude to the staff and Carla and cried the entire drive home.”  Nastassia continued, “Graduation rolled around, I walked the stage, heard my family cheering me on, in that moment I felt like my childhood dream finally came true.  I didn’t need to dream anymore because I was living the reality.  I felt alive.  I felt purpose stirring inside of me.  I felt like I had made my family, friends, and more importantly myself proud.  In that moment at graduation, I felt like generational barriers were broken.  I felt honored to be able to represent my family by doing what many generations before me were unable to accomplish for reasons beyond their control.”

Post-AU, Nastassia sees herself “working as a travel nurse in a third world country.”  She stated, “I will also be pursuing my final goal of becoming a nurse practitioner (NP) by taking the Master of Nursing-Nurse Practitioner (MN-NP) program.  I am also looking forward to being married with 2 or 3 children.  “

Nastassia concluded by stating, “I am very excited to start my program at AU this fall.  I am one step closer to accomplishing another goal and I cannot wait to see what the future holds.  It has been such an amazing, yet challenging journey of self-discovery, growth, and learning, but I wouldn’t want it any other way.  So, thank you MHC, AU, and this great country Canada for allowing me to fully realize my dream.”  Best of luck Nastassia!