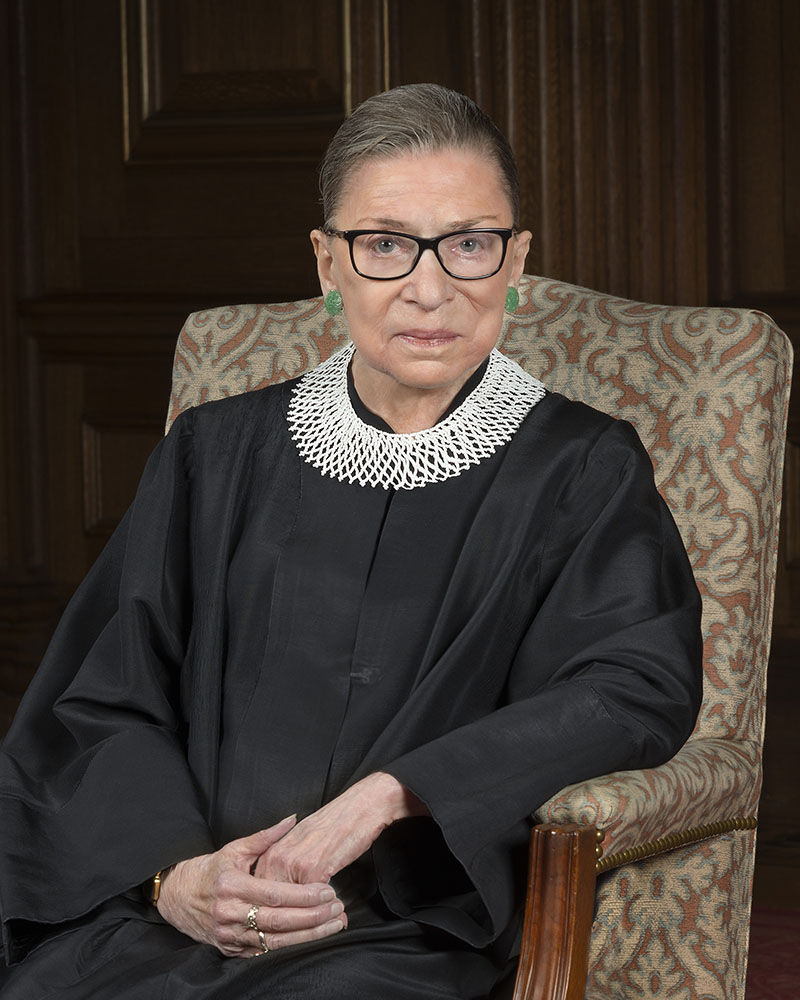 Ruth Bader Ginsburg (1933-2020) spent five decades fighting all manners of inequality and changed the world in far too many ways to be included in this short article.  Ginsburg was nominated by President Bill Clinton as an associate justice of the Supreme Court of the United States in 1993 and held the position until her death in 2020.

Joan Ruth Bader was born March 15, 1933 in Brooklyn New York.  Joan Bader became known as Ruth when she began school and her mother noticed there were many girls in the classroom named Joan, so asked the teacher to call Joan by her middle name to avoid confusion.  Her father was a Jewish emigrant from Odessa, Ukraine, and her mother was born in New York to parents from Krakow, Poland.  The Bader family belonged to theEast Midwood Jewish center, which is a Conservative synagogue where Ruth learned the tenets of the Jewish faith and the Hebrew language.

Ruth’s mother was active in her daughter’s education and encouraged her to go further.  Ruth graduated with a B.A.  from Cornell University in 1954.  Shortly after graduating she married Martin D. Ginsburg and they had their first child before Ruth entered Harvard Law School, where she was one of only a few women in her class (1956-1958).  She later transferred to Columbia Law School and graduated as a Kent Scholar (similar to AU’s “with Great Distinction”) in 1959.  At this point she began her career as a law clerk in the US District Court in the Southern District of New York.  Ginsburg became the first woman to be hired with tenure at Columbia University School of Law.  To a great extent, it was her own career that led her to become an advocate for gender equality and women’s rights.

She was cofounder of the “Women’s Rights Law Reporter,” which was the first law journal dedicated to women’s rights.  President Jimmy Carter appointed Ginsburg to the US Court of Appeals for the District of Columbia Circuit, where she remained from 1980-1993.  On August 10, 1993, Ruth Bader Ginsburg was sworn in as Supreme Court Justice.  In 2002 Ginsburg was inducted into the National Women’s Hall of Fame.  From 2006 to 2009 Ginsburg was the only female justice on the Supreme Court.

Martin Ginsburg died June 27th, 2010 from metastatic cancer shortly after the couple had celebrated their 56th wedding anniversary.  Ruth Ginsburg received the highest honor from the American Bar Association on August 9th, 2010, the “American Bar Association Medal”.  In a groundbreaking move, Ginsburg was the first Supreme Court justice to officiate at a same-sex marriage ceremony.  In 2016 Ginsburg called presidential nominee Donald Trump a “faker”, however a few days later she issued an apology, claiming her words were inappropriate for a judge to make.

Ruth Bader Ginsburg’s health problems began in 1999 when she had surgery for colon cancer and underwent chemotherapy following the surgery.  In 2009 she again received chemotherapy for pancreatic cancer.  In November, 2014, she had heart surgery to place a stent in her right coronary artery.  In 2018 she had two cancerous nodules removed from her lung.

Ruth Bader Ginsburg leaves a remarkable legacy which includes induction into the National Women’s Hall of Fame and receiving a Lifetime Achievement Award from Scribes (The American Society of Legal Writers).  In 2019 Ginsburg received the one-million-dollar Berggruen Prize for Philosophy and Culture, which she donated to several charitable and non profit organizations.  The Berggruen Institute recognizes “thinkers whose ideas have profoundly shaped human self-understanding and advancement in a rapidly changing world,” describing Ginsburg as a “lifelong trailblazer for human rights and gender equality.” On August 26, 2020, Ruth Ginsburg was the recipient of the National Constitution Center’s Liberty Medal “for her efforts to advance liberty and equality for all.”

Ruth Bader Ginsburg died on September 18, 2020 at the age of 87.  Following a private ceremony with her family and close friends, the casket was placed outside for public viewing.  Thousands of mourners lined up for two days for the opportunity to pay their respects to an outstanding woman.  Ruth Ginsburg was the first woman, and the first Jew, to lie in state at the capital.