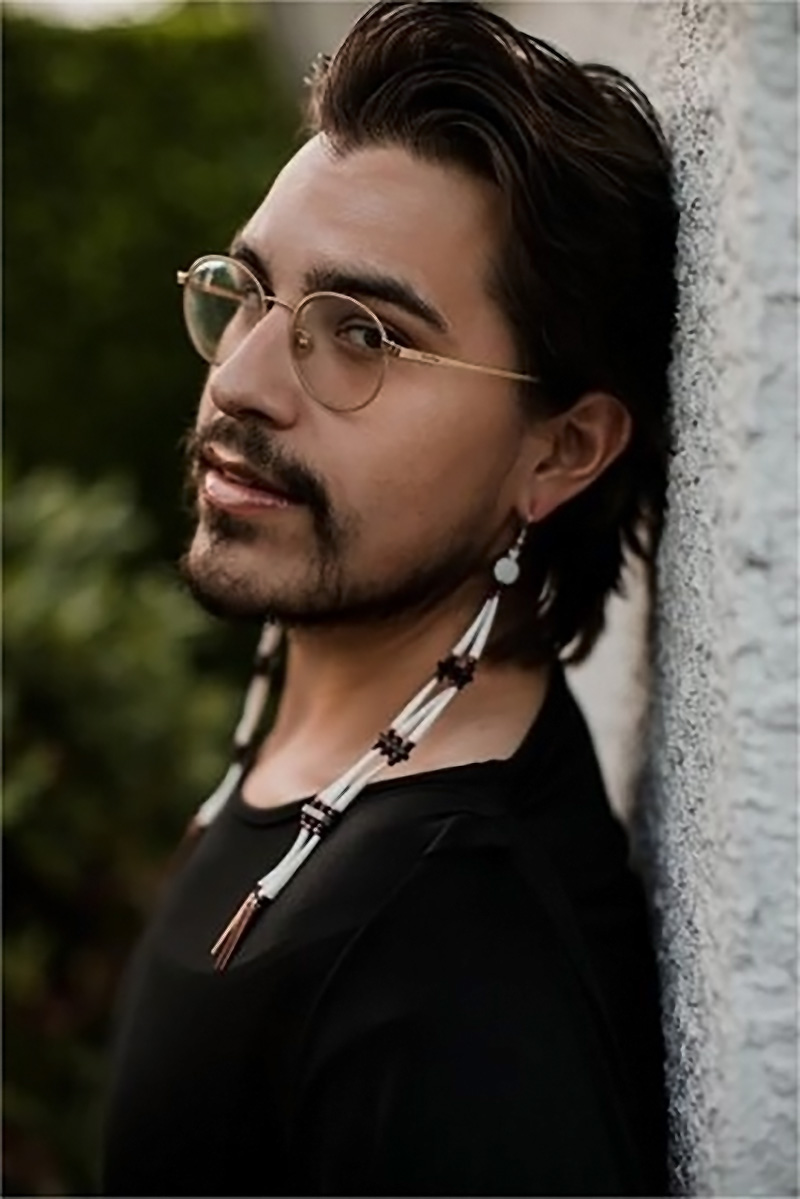 The Voice Magazine was recently able to conduct a Q&A with Joshua Whitehead, the new Writer-in-Residence (WiR) at Athabasca University.  On October 1, 2020, Whitehead was announced as the WiR for the 2020-2021 term, a yearlong position previously held by celebrated authors, Katherena Vermette, Esi Edugyan, and Hiromi Goto.  WiR’s typically spend 60% of the year working on their own projects, and 40% as a manuscript resource for the AU community, while taking part in public readings and literary events.

Whitehead, “an Oji-nêhiyaw, Two-Spirit member of Peguis First Nation” (Treaty 1), is a PhD candidate in Indigenous literatures and cultures and lecturer at the University of Calgary.  He is also author of acclaimed and award winning works, Jonny Appleseed and full-metal indigiqueer, as well as Love after the End: An Anthology of Two-Spirit and Indigiqueer Speculative Fiction.  Currently, he is working on Making Love with the Land, a creative non-fiction, “which explores the intersections of Indigeneity, queerness, and, most prominently, mental health through a nêhiyaw lens.”  Other work can be found in various publications, such as Prairie Fire, Red Rising Magazine, The Fiddlehead, Arc Poetry Magazine, and more.

Can you tell AU students a little about yourself?

“tânsi nitotemak!  I’m currently a Ph.D.  candidate at the University of Calgary (Treaty 7) where I focus on Indigenous literatures and cultures—and within that, primarily Indigenous (nêhiyaw/Cree) genders and sexualities.  I moved to Alberta five years ago from Manitoba where I did my B.A.  in English Honours and my M.A.  in Cultural Studies at the University of Winnipeg (Treaty 1).  I hail from Peguis First Nation and identify as a Two-Spirit person.  I also am very much an Indiginerd, when I’m not studying, reading, or writing, you can usually catch me watching copious amount of horror films (B-grade horror is a must), playing RPGs on my PS4, dabbling in VR, watching Billie Eilish’s music videos, or being the most conscious, and thereby worst, colonizer in a round of Settlers of Catan.  My book of poetry, full-metal indigiqueer, is a cyber/bio-punk foray into decolonial poetics centered around the canon, my novel Jonny Appleseed is, what I call a sibling story to full-metal, a rumination on Two-Spirit sexualities and livelihoods in downtown Winnipeg.  Currently I have an edited anthology entitled Love after the End which details Two-Spirit and Indigiqueer speculative fiction geared towards the utopian.  And currently, I’m working on finishing a creative non-fiction manuscript, Making Love with the Land, which revolves around Indigeneity, queerness, and mental health slated to be released Spring 2022 with Knopf Canada.”

Can you tell us a little about your journey to becoming a writer?

“I have been storytelling since I was a child, my parents have stories and poems saved from when I was five years old—one of which is a short story about my anthropomorphic toys, I’m not sure what came first, mine or Toy Story.  My refuge as a kid, remembering this was when the internet was first being introduced and we played on floppy discs, was the library where I’d go and spend entire weekends reading the likes of Ursula Le Guin, C.S. Lewis, and Shirley Jackson.  I took all of the extra credit English and writing classes in high school and have this horror novella I wrote about the cloning of Christ and the onslaught of an oncoming WW3 saved from when I was a teenager, hah (it’s dreadful).  In my undergrad, I began taking creative writing courses and became fixated on the Beatniks—Kerouac, Ginsberg, and Albert Saijo primarily.  This was also in the time of my coming into my queerness, which is when I learned that stories are always a homecoming.  In my M.A. I encountered Toni Morrison and Beloved, which was one of the first BIPOC texts I had ever been assigned or read really throughout my academic tutelage—it was when I learned what real stories can do, when the body of text is attached to the body of the writer (which it always is, living and writing are wholly political acts).  What I learned here was that I was being taught to write white, and since that realization, I have been actively trying to embody myself, hi/stories, communities, and experiences into the stories I now tell.”

Can you tell us a little about the Writer-in-Residence program? How did you come to AU?

“I was invited by the lovely Angie Abdou to join the AU WiR and I couldn’t be more honoured to be a part of this family for the next little bit—especially in a time where we are all sorely starving for conversation and intimacy under COVID-19.”

What do you hope to accomplish during your residency here at AU?

“I hope to make new kin, have amazingly delightful (and difficult) conversations with the community in Athabasca, learn new ways of being and speaking, and, most importantly, help foster a community in the ways I can virtually.”

If you could give new writers one piece of advice, what would it be?

“Be wary of the ways in which we, as storytellers, archive or note take in our lives as people—don’t consume voraciously, be strategic in how we curate our inspirations and our traumas.  What I’ve been teaching myself is: I need to be a person first, a writer second.  Don’t forgo your relations, prioritize them.”

Which books (fiction/non-fiction) have made the biggest impact on your life and why?

“Kiss of the Fur Queen by Tomson Highway was one of my first forays into Two-Spirit/Indigiqueer literature and it was also based in Winnipeg and Manitoba, it was one of the first times I saw myself in story.

Larissa Lai’s Salt Fish Girl which taught me the fundamental writing truth I hold now: that even in speculative fiction, the noun body is a magnitude, that such a noun holds all of us in relation: bodies of text, physical bodies, bodies of water, land, sky.

Alexander Chee’s How to Write an Autobiographical Novel for his ruminations on Korean-American queerness and the form of both the novel and the essay—in how there are times in which literature becomes a peeking into voyeurism.

Garth Greenwell’s Cleanness because of his propensity for nostalgia and love even as his speakers are transplanted into new regions and places—as well as his ability to write about pain and trauma in ways that are rejuvenative and healing.

Billy-Ray Belcourt’s A History of my Brief Body because of his willingness to find utopia even in dystopic conditionings: such as within parameters of loneliness, in intergenerational trauma, on Grindr, and his skill to eat theory and regurgitate it as prose.”

Which author has had the greatest impact on your life and why?

“Toni Morrison and Eden Robinson will forever be the literary matriarchs to my writing practices for showing me the inherent power within oratory, histories, survival, and taking up space in a world that has continually positioned you on the wayside.”

What advice would you give to students struggling with impostor syndrome/struggling to find their place in writing/publishing/academia, especially underserved and marginalized communities?

“Forget what you were taught about the greats, the masters, the canons—never write to whiten yourself; edge your stories so as to maintain the fluidity of your queerness; cough up a lung of glitter and maintain the femme glimmering.  Your story is valued and valuable.  Conceptualize your elders as theorists, community as canonic, your stories as sorely needed—because they are.  Nourish your body so as to enrich the body that is textual, and never sell or give it away freely for the idiom of success.  Having said that, never consume wholly and freely, be strategic and selective in what you choose to record and narrate—be weary not to become the consuming voyeur, yourself.  Stories are animate kin, those we write and those we are gifted, treat them as such.  Storytell as if our lives depend on it—because they often do, stories are survival mechanisms.  We need you with us, literarily and literally, as we reshape the horizon of this nation’s oral hi/stories.”

In many ways, 2020 has been a culmination of historical (and current) injustices reaching a boiling point.  I would like to focus on the ways various communities, including the Two-Spirit community, are resisting and thriving in beautiful ways as well.  In 2020, what have been some examples of resistance that give you hope for the future?

“I’m thinking right now of having come back from the #ShutDownCanada protest in Calgary this past Saturday which was curated and enacted by the Idle No More Calgary chapter.  It was organized and ran primarily by Two-Spirit and Indigenous youth.  I was filled with hope and strength from their stories, songs, chants, and protests even as I returned home to sit back in the maw of settler colonialism.  I think too of the national protests that happened that same weekend, the shutting down of Yonge St.  in Toronto by more Indigenous youth—what a time to be witnessing such revolution.  I’m hopeful about the plethora of BIPOC and/or queer writing that is emerging into the Canadian literary landscape and actively changing the parameters of excellence.  I’m inspired by the ongoing work of Wet’su’weten, Land Back Lane, Mi’kma’ki sovereignty, the moose moratoriums with the Anishinaabe, the Kumeyaay activism around the wall in the southern US, the BLM movement across Turtle Island—we are living in a time of unprecedented imperialism but we are also on the cusp of civil, treaty, and humanitarian rights too.”

What work needs to be done? How can AU students get involved?

“My advice would be not to leave the work of social and systemic change simply on those being actively impacted—it’s one thing to share a black square or to a post of “All Eyes on Mi’kma’ki” but its another to actively engage and interrogate one’s self, community, family, and standing in the ongoing colonization and imperialistic killings of BIPOC folk across Turtle Island.  I would encourage folks to follow social media accounts led by front line defense groups, to donate what you can, albeit time, money, or conversation, around issues of decolonization and BLM.”