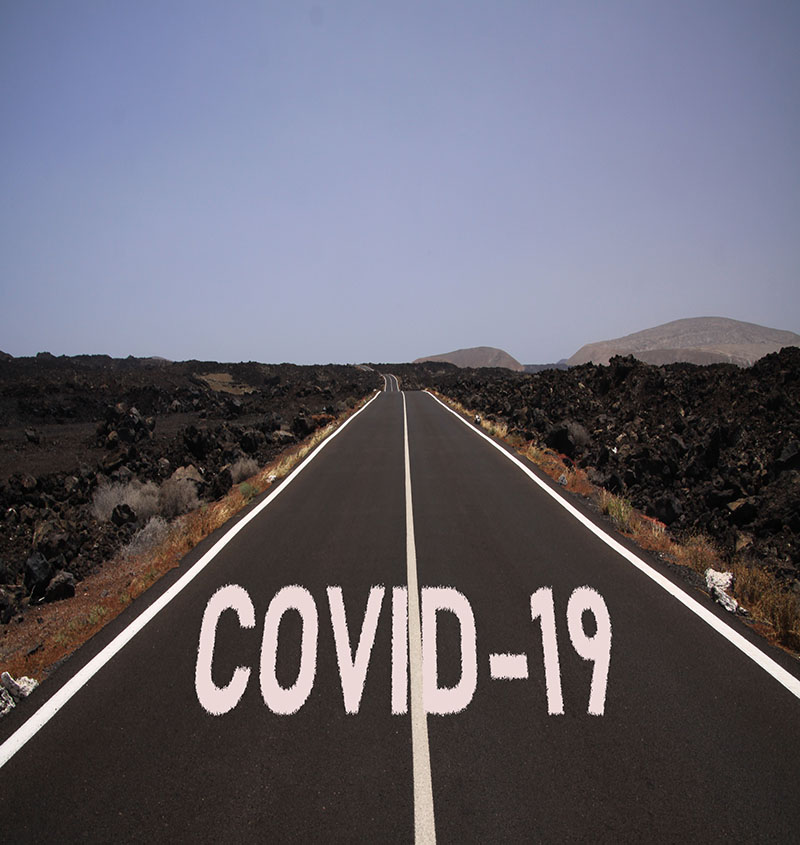 In recent months, I have noticed increasingly polarized conversations about the current pandemic.  On one hand, there are those who continue to maintain lives as before, forcefully denying the magnitude or existence of the COVID-19 virus, oblivious to the various privileges that have shielded them thus far, while countless others have begun sharing stories of fear, hospitalization, and death.  As someone who has lived in countless towns, with family and friends spread across the globe, this collision of worlds is most evident on my social media accounts featuring obituaries juxtaposed with celebratory drinks on patios and family get togethers.  Amidst these troubling binaries, another story is also emerging, one that I know far too well.

As we enter the second wave of the COVID-19 pandemic, increasing reports of what have been deemed COVID-19 “long-haulers,” have been steadily appearing in the media.  Although technically considered recovered from the virus, individuals worldwide have been coming forward with stories of sustained illness.  Various reports are now emerging that up to one in ten individuals report long-term complications, including breathing problems, debilitating fatigue, and cognitive difficulties.  Other studies, such as those in the Journal of the American Medical Association, recently revealed that two months after being released from hospital, 87% of individuals had at least one symptom and more than half struggled with fatigue.

I have followed these statistics and personal histories with an increasing sense of dread and Déjà vu.  These stories mirror my experience, which began two years ago when I was hospitalized abroad with a mysterious illness and never recovered.  It later became clear that my condition was the result of many years of slow deterioration, culminating in a final blow to my immune system.  Although my illness is quite different from COVID-19, many of my symptoms are nearly identical, and periodically, various COVID-19 medical theories have even led to shortages of my own medications.  In addition, despite being studied for generations, like COVID-19, my conditions remain understudied, underfunded, and, at times, controversial.

Currently, I appear much improved in comparison to the degeneration that occurred in 2018.  Despite outward appearances, it takes constant advocacy, as well as upwards of fifty pills a day, multiple injections a week, and countless medical appointments to remain at this baseline of functioning.

I know too well the long road ahead for those traversing COVID-19’s long-term damage.  I have experienced the moment when one’s closest relationships disintegrate under the strain, when employers and instructors tire of one’s constant medical appointments and inevitable slipping performance and grades, and when medical staff begin to lose patience.  I also understand the grief of remaining ill and the mourning of a life that is forever changed.  In many ways, those who become chronically ill later in life reveal that individuals cycle through various stages of grief, alternating between anger, denial, depression, bargaining, and acceptance.  Much like the grief following the loss of a loved one, we bid farewell to former health, careers, and relationships, while navigating an unknown future and increasingly isolated existence.  And this grief will not be linear with each setback threatening hard won progress.

Despite increased disregard for those most vulnerable and ableist rhetoric often seen in the media, it is becoming increasingly apparent that even individuals with mild COVID-19 symptoms and no pre-existing conditions are remaining ill long-term.  One theory is that the immune system does not return to baseline functioning after infection, or that genetics may play a role.  Other theories posit that while the infection has left most parts of the body, it remains in various areas.

Unfortunately, with widespread devastation and overwhelmed staff and facilities, the current medical focus remains on keeping individuals alive, while those who survive are slipping through the cracks, relegated to a liminal state.  Long haulers remain isolated, unable to work, unable to perform basic tasks, and unable to obtain any form of aid from the overwhelmed, underfunded, and outdated medical establishment.

Gaps in the Medical System

Unfortunately, COVID-19 is yet another example of the lack of research surrounding the immune system and other factors, such as genetics.  It also reveals how the medical establishment treats countless individuals struggling with debilitating symptoms that testing fails to uncover; people who are eventually told that perhaps it is all in their minds.  This separation of mind and body, and the compartmentalization of body parts, disregards the indisputable link between physical and mental health, and is further complicated by outdated concepts surrounding race, gender, identity, and socio- economic factors.

Gender bias in the medical establishment has long been reported. Many women are misdiagnosed as emotional or psychogenic or underdiagnosed, especially when it comes to chronic pain.  Although most women expect to experience these biases, those disproportionately affected are those in the overlapping BIPOC, trans, and disabled communities.  One prominent example was the recent death of Joyce Echaquan in a Quebec emergency room.  With COVID-19 in particular, systemic racism in healthcare has become more apparent, with BIPOC women facing higher disproportionate death rates, which have led to increased discussions about the various social determinants of health and medical racism.

Turning to Social Media for Community

With the advent of social media, as well as more individuals overcoming stigma and sharing their stories with mainstream media, many of those who find themselves remaining ill with long-misunderstood conditions are finding community, and countless others from all parts of the globe sharing strikingly similar experiences.  Despite drawbacks, social media support groups for various conditions, including COVID-19, have proven beneficial to people sharing their symptoms, in many ways saving lives and providing research data opportunities.

Over the years, many of these support groups have provided a safe place and advice for those with misunderstood conditions such as autoimmune diseases, namely Mixed Connective Tissue Disease, Lupus, Rheumatoid Arthritis, and Fibromyalgia, which causes widespread pain, fatigue, and cognitive difficulties, with no clear testing or cause.

Similarly, Myalgic encephalomyelitis/chronic fatigue syndrome (ME/CFS) is another example of a misunderstood chronic and complex disease, with no clear cause.  Many doctors believe that it occurs after a stressor, such as a viral infection that causes changes to the immune system.  While it is now considered a valid diagnosis, misinformation and misdiagnosis persists, even in the medical system.  Advocacy groups, such as Millions Missing, advocate for further research funding and treatment.

Lyme disease is another example of a misunderstood and under-researched condition.  Recently, concerns have been raised about striking similarities between COVID-19 and Lyme, including those considered “long haulers” in Lyme.  As with Lyme, of which over 50% of antibody testing is believed to be inaccurate, concerns have been raised over the accuracy of testing for COVID-19 antibodies, with over 30% of false negatives.  Similar to recent COVID-19 long haulers, more reports are emerging of individuals with Lyme not getting well after the prescribed two weeks of antibiotics treatment, with lingering controversy in the medical world on treatment options.

The term Lyme often refers to an infectious disease caused by the bacteria Borrelia burgdorferi (along with several sub-species), spread by blacklegged ticks, such as Ixodes scapularis and Ixodes pacificus.  However, it is becoming an umbrella term for various vector-based diseases known as co-infections, including Ehrlichiosis/Anaplasmosis, Bartonella, Babesia, and Mycoplasma.  Climate change appears to be spreading the prevalence of infected ticks, and there is also concern about spread by other forms of transmission as well.

Hope for the Future

COVID-19 long haulers are just the most recent in a long line of medical conditions that reveal Western medicine’s lack of testing and limitations.  In my case, although doctors were initially very concerned with my symptoms, their frustration became evident as tests revealed nothing.  Amidst questions surrounding my mental health, the cause was later revealed by a simple blood test, one that had just not been performed.  Despite initial answers, my treatment remains uncertain and fluctuating, and certain aspects remain unresolved.

It is hoped that in some way, research into COVID-19 will eventually trickle down to other misunderstood and underfunded illnesses.  Until then, many individuals who feel abandoned by the medical establishment will continue to turn to alternative, as well as traditional forms of treatment, including Acupuncture and Gua Sha.  While many of these prove beneficial and relieve symptoms for some individuals, they are also forced to consider various unproven methods as well, often, at the mercy of those who prey on the most desperate.

The Case for Masks

Although COVID-19 is relatively new and further research is required, many experts appear to agree on one simple fact: Added to various preventative measures, such as hand washing and physical distancing, facemasks are believed to slow the spread of the virus.  As with any new medical emergency, ever-evolving government and public health policies have led many to question the efficacy and even truth of public health recommendations.  In my opinion, even if masks are eventually proven more ineffective than previously believed, we, as a society, are doing the best we can with currently available information to protect those most vulnerable.

Increased anti-mask rhetoric also focuses on the individual’s freedoms, without considering our civic duty to our communities or basic human decency.  While some individuals understandably cannot wear masks for health reasons, often those most vocally opposed co-opt the disability justice movement’s years of work, while blatantly disregarding the community itself.  As someone with allergies, breathing problems, irregular heart rate, and severe PTSD, I understand that wearing a mask can be difficult, yet I remain conscious of those who my panic and discomfort ultimately protects.  Although I remain in isolation most days, I find myself more often confronting individuals who refuse to wear masks at my various appointments, those who disregard community safety protocol in locations serving the most vulnerable, and those who berate overwhelmed staff struggling to keep us safe.

I wear a mask as the bare minimum to protect my community as death rates climb amidst eugenicist rhetoric.  I also remain conscious of the terrifying implications of a virus that can leave many more of us chronically ill and disabled.  Despite progress, society remains inaccessible, and continues to disregard and devalue our lives.  We, as a society, are also not prepared for an increasingly chronically ill and disabled workforce, with a lack of social supports and increasing individuals functioning as caregivers.

As we enter the second wave, let us make a fundamental paradigm shift and protect those around us.  Our bodies remain beautiful and worthy even in the midst of chronic illness and disability, yet, for many, life is incredibly isolated and exhausting—not simply as a result of our varied conditions, but as a result of confronting daily ableist and eugenicist thought.  Despite this, we continue to resist, to survive—and to thrive.