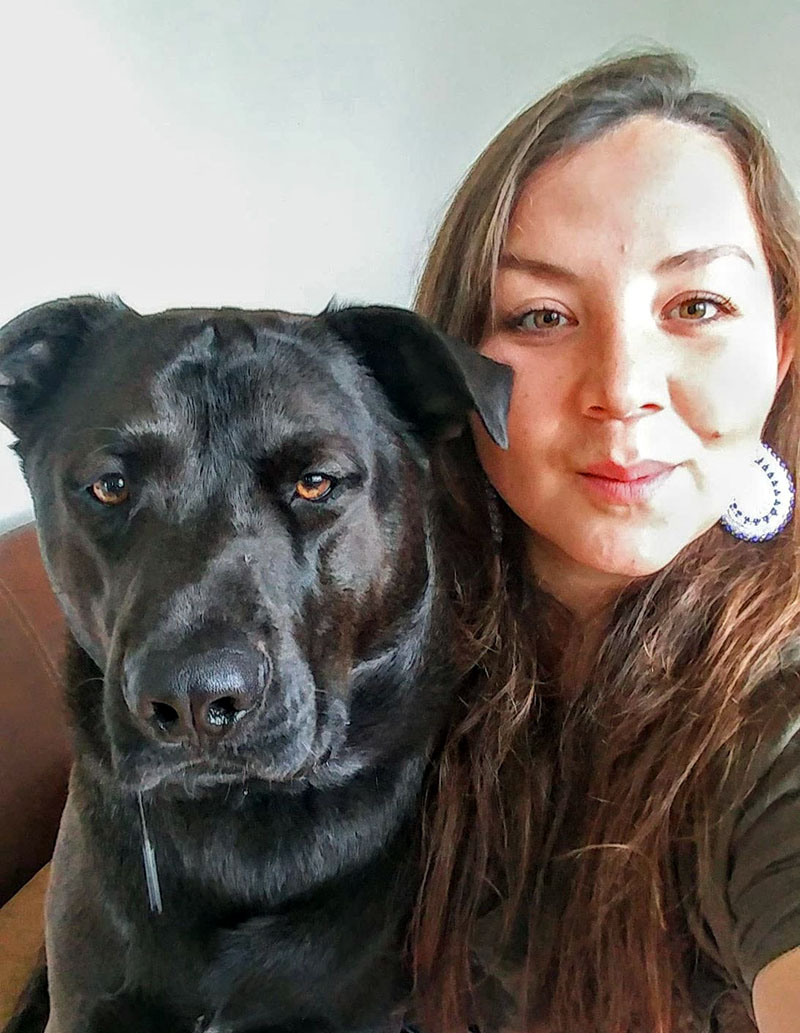 The Voice Magazine recently had the chance to chat with Jo-Mary Crowchild-Fletcher currently in Calgary, Alberta, the traditional Treaty 7 territories of the Blackfoot Confederacy (the Siksika, Piikani, and Kainai First Nations), the Tsuut’ina First Nation, the Îyâxe Nakoda (the Chiniki, Bearspaw, and Wesley First Nations), as well as the Métis Nation of Alberta (Region 3).

Jo-Mary began the interview in Tsuut’ina, “Dadanast’ada, sizi Jo-Mary at’a.  Sinajunagha Crowchild uwa, Fletcher uwa Tsuut’ina uwa Gooji uwa Ik’oholi at’a, (“Hello to each and every one of you, my name is Jo-Mary Crowchild-Fletcher.  And my ancestry is Tsuut’ina and Siksika on my mother’s side and French and Scottish on my father’s side.”) and is currently in her first year of the Bachelor of Science: General program, although she may potentially switch schools in the future to pursue a major in Ecology, “which sadly Athabasca doesn’t offer.”  She hopes to either purse environmental law/Indigenous law at the University of Victoria, which offers “half Indigenous law and half Canadian law,” or “continuing on the science journey, on the ecology journey, and eventually getting a Master’s and working up to a Doctorate.”

Jo-Mary grew up in Golden, British Columbia in the foster care system, stating that it has “been quite a journey to get to where I am today.”  After high school, she worked for the Ministry of Children and Families, “creating supports and changing policy … for current and former youth in care, especially Indigenous youth.”   However, she decided to pursue higher education, choosing AU’s online framework, which “was best for how I learn.”

Two years ago, she moved from Vancouver to Calgary, stating, “This is where my people are from.”  She continued, “I wanted to learn more about my culture and about my languages.”

When she is not studying, Jo-Mary tries “to do a lot of advocacy work for Indigenous people and the earth, [including] climate change.”  She stated, “In Calgary, I do some work with a group called Bear Clan [Patrol], and they do some frontline work,” distributing food and clothing to help vulnerable populations on the streets.  She also spends time outdoors with her year and a half year old Mastiff-Black Lab mix, Xakiji, which means Chief in Tsuut’ina.  She stated, “If I can be outdoors, that’s where I want to be!”

She spoke briefly about her two proudest moments in life, the first of which was “graduating from high school.”  She revealed, “Being Indigenous and being a foster kid, graduating wasn’t really what happens statistically for us and even surviving to be 18 or 19 … I made it to this point in my life, and I get to decide what I want to do next.”  Her second proudest moment was “the first hike of this year.”  She stated, “I ended up doing a 15 km hike with my dog … The last 2 km of this hike were straight uphill.”  She continued, “With all the deaths that were happening related to police brutality and a lot of things that were going on in the news; I just needed to get out of the city and do anything that wasn’t super focused on everything that is going wrong in the world and everything that needs to change.  In that moment, [the focus was] getting to the top of that hill.”

She considers her biological father, Brian Fletcher, as one of her biggest influences in her desire to learn.  She stated, “We grew up in the mountains and he had a degree in Forestry … That was the start of my ecology learning.”  She also credits her “spirit parents, Kim Younger and Paul Bridger,” who stressed the importance of being open-minded and showed her “how to live in a good way.”

Jo-Mary’s experience with online learning has been positive so far, based on her independent learning style.  She has been enjoying her program, as well as her courses.  One of the negative aspects, “which comes with being an online program or an online school is making friends and seeing who else is in the program or in the school.”  Although she has joined several AU Facebook groups, it can be isolating at times.  Jo-Mary finds communication with her tutors great, stating that “all of my tutors have been fantastic.  Usually they get back to me within a couple of days …  If they don’t, they usually send out an email.”

When asked if she ever wavered about the idea of her educational journey, Jo-Mary stated, “Being Indigenous, going to any sort of post-secondary institution  [made me question], ‘Is this the sort of environment I want to be in?’ because school in general has rarely been good for Indigenous people, with residential schools or days schools.  Even now, it’s such a colonial institution that sometimes it’s hard to find the supports … Also, growing up with a lot of trauma from foster care … I know what I want to do but how do I get to those steps?”

Her most memorable AU course thus far has been ASTR210: Introduction to Astronomy and Astrophysics, which despite being “from a colonial point of view,” made it “really fascinating learning about space and the universe.”  She continued, “My last assignment was writing an essay, which connected Indigenous Creation Stories … to different theories of science … In these Creation Stories, they had similar theories or ideas to the big bang theory … [However], these Creation Stories have been passed down for thousands and thousands of years, when the big bang didn’t come into theory until the 1920s.”

If she were the new president of AU, Jo-Mary revealed, “I know that there has been some work with decolonizing AU, so it would probably be something around that and Indigenizing AU for students.”  When I asked for her thoughts on the process, she continued, “Decolonizing is a big word; it can mean so many things to so many people.  When I was applying to AU, (or any other post-secondary’s that I have applied to), I always look up their Indigenous supports, and how does the school work around supporting different minorities … so that all students can have success.  This often involves reaching out more to students and creating space for students to feel comfortable.”  She also mentioned Nukskahtowin at AU, stating that it would be interesting to speak “with them more and see what they need and making sure that there are Elders available for people.”

On a more personal level, Jo-Mary would love to have lunch with the late legendary environmentalist, conservationist, and wildlife expert Steve Irwin, “to talk about animal advocacy because we share some similar beliefs.”  The lunch would be “on top of a mountain.”  She continued, “Any conversations I’ve had on top of a mountain have usually been pretty great.”

Outside of her studies, she is currently “rereading [Robin Wall Kimmerer’s] Braiding Sweetgrass [: Indigenous Wisdom, Scientific Knowledge and the Teachings of Plants].”  Kimmerer, an Indigenous scientist and academic, is also a person that Jo-Mary would like to have lunch with!  As for television shows, she is watching the legendary She-Ra, revealing that she “just finished exams” and is “binging on anything that is not school-related!”

One thing that distinguishes Jo-Mary from other people is that she often finds herself described as someone with a “calm demeanor, even in stressful situations.’  Although she admitted that, like many of us, she “definitely gets stressed,” she always manages to handle situations calmly.  As for something that she thinks about herself personally, she considers herself very optimistic, which “probably helped through my childhood …  to where I am today.”  She left students with a bit of wisdom, as she related her most valuable life lesson in life: “To walk in a good way, we need to realize that we are both a teacher and a student and to be open-minded when we come to moments of learning.”  Best of luck Jo-Mary!