Articles
The Voice
Why We Should Befriend Nature 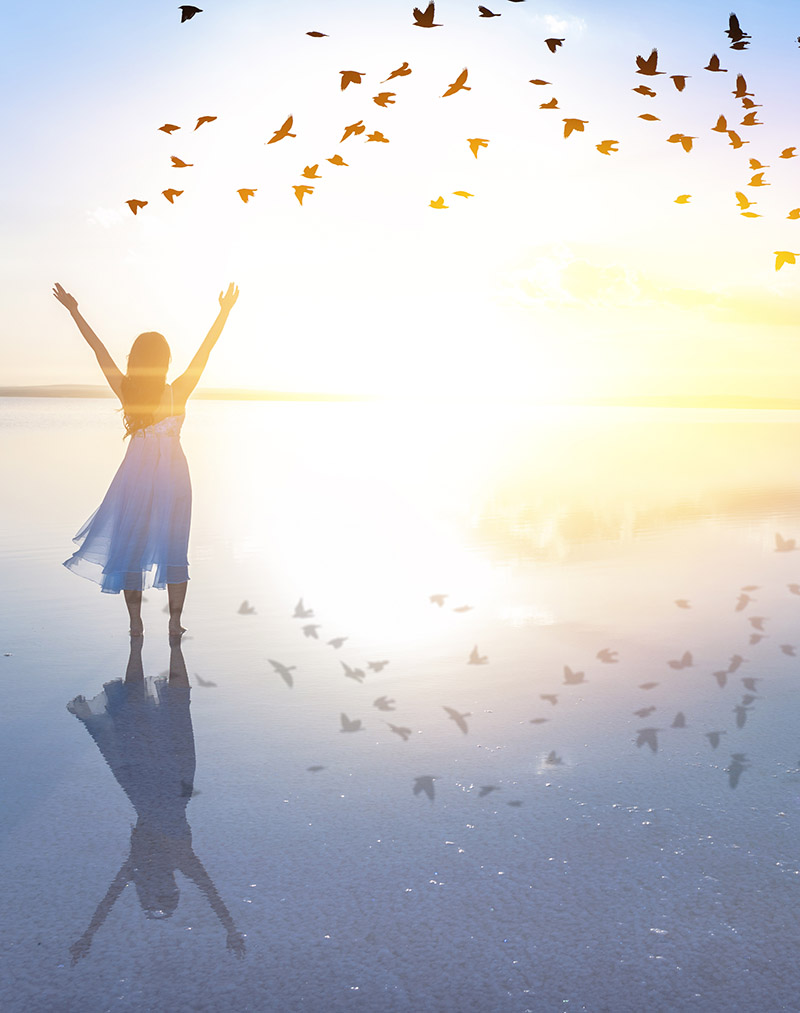 For most of my life, my idea of nature was a peanut in a Snicker’s bar.  Blindly, I missed out on nature’s worlds of mysterious beauty, of sacredness, and of friendships with unlikely souls.

I saw a clip about a 97-year-old man who wrote philosophy books, one of which was on dying.  He seemed a lonely man, facing a death he believed would lead to nothingness.  He seemed forlorn by the thought of nonexistence.  But what saddened me most was his words about nature.  He said, in all his life, he never really noticed the trees.  Not until now.  Much of the beauty of the world passed him by, unnoticed.  Nature to him, like to me not long ago, held little beauty.

But I had no excuse.  Mom would spend hours in her garden, digging in the rich, moist soil, planting carrots, beets, potatoes, peas, and lush lettuce.  Mom’s garden-grown carrots, when steamed, tasted like crisp, buttery delights, a secret none of my friends knew, a pleasure that kept me healthy, unlike some of my friends who feasted on warmed up cans of Campbell’s stew.

Mom and Grandma were two nature-oriented souls.  Mom grew endless rows of flowers in her seven acres of land.  Grandma, meanwhile, grew a modest flower garden and an apple tree.  They both once said something that stumped me: “Every flower has its own personality.” Perhaps if I grew a flower, I’d have known why.

Mom loved birds—so much so, she fed and housed them.  When I was in grade three, or was it four, she placed a picture of a bird on my wall, bearing the words, “A bird in the bush is a friend indeed.” That year, I learned how to spell the word “friend,” proudly getting it right on a spelling bee.

Mom once bought ten or so bird houses crafted by disabled people.  She hung those bird houses throughout her seven acres of land, luring a community of birds, and later chicks, to fill her havens.  Mom grew special trees with berries for the birds to feast upon, and adorned her acreage with a beautiful pond.  The birds delighted Mom with choirs of melodious chirps.  So, she spent her days enthralled, bird-watching.

But one day a giant jealous bird came along and ravaged those homes, killing the community of birds in a wild bloodshed.  When Mom saw the death of her beloved birds, she was heartbroken.  Mom’s anguish, to this day, saddens me.  “I’ll never buy birdhouses,” I secretly thought.  And so, I failed to grasp why anyone would watch birds.

My neighbors had a beautiful yard with a cobblestone spiraling walkway.  In that yard, they placed a bird bath with a bird feeder.  Every day, tiny birds—what seemed like hundreds of them—would splash in the water, chirping, as my neighbor and his wife watched on a nearby bench.  I didn’t understand, but I longed to know why.  “Why do you like watching the birds?” I asked.  “You should try it sometime,” the neighbor said, a tinge of annoyance in his tone.  And I walked away, wondering, again, why people love watching birds.

My disregard for nature extended to trees.  I lived with an elderly landlady, and she had a giant tree in her backyard, so giant that the branches hung over the neighbors’ lot.  When the neighbors complained, my landlady asked me, “Should I cut down that tree?” I replied, “It’s a pain to mow.” When the tree was cut down and hauled away, I felt a tinge of sadness.  Now, a decade later, I feel remorse over the death of that tree, for I have come to know more about the soul within all living things.

I then met my turning point.  During an illness that plagued me, magpies circled me, stalked me from neighboring trees, swooped me, thereby terrifying me.  I dreaded my trips home.  Many winters later, I read up on magpies.  I learned they remember, for their entire lives, faces of friends or foes, even the human ones.  I also learned that magpies enjoy cat food.  Boldly, I set out to make amends.

When I first placed cat food on the snow-covered lawn, twenty or more magpies swarmed around the kibbles, taking turns filling their beaks and flying off to their dwellings.  The birds looked uniform, like a military battalion.  As they flew over my head, I shuddered, worried they would swoop down and peck my scalp.  But they seemed nothing short of grateful.  So, my habit of feeding the birds began.

One stormy night, I went outdoors, surrounded by trees.  Typically, I’d feed the birds.  But I had nothing to feed them that day.  So, I meditated on the bench in the dark of night.  And then I had this feeling of being watched, not by another human, but by the trees.  I had this eerie feeling that every tree was staring me down.  The trees seemed alive like never before.  As I drove away, I had this funny feeling that I had disappointed those trees.  And then I realized it was not the piercing stare of the trees I felt; it was the watchful eyes, within those trees, of the hungry birds.

Normally, I feed the magpies black sunflower seeds, cat food, and suet.  Suet is beef fat mixed with peanuts, corn, grains, and sometimes berries.  The birds go wild over it, hoisting chunks of suet in their beaks and flying off at hyper speeds, fearing foes who might stake out their treasure.  As the birds fly off, I wonder if they return to their companions, maybe even their chicks, to share in on the feast.

Magpies mate for life, and I once saw one, its mouth filled with kibbles, return to its mate whose eyes widened, bewildered, as she shook her head, once, in disbelief.  The kibble bearer seemed to shrug in equal surprise.  They looked like a married couple on a prime-time sitcom.   As I peered up at those birds, they peered down at me.  I delighted in that moment and prayed the kibbles would fill their bellies, helping them survive a brutal winter.

One time while meditating, I was greeted by a young magpie, who flapped its wings wildly on the bench beside me, fluttering upward onto the branch above me, as if to say hello.  Even the hares that ate leftover birdseed would lock eyes with me, bearing a love-filled gaze, as they gently chewed grass.  Twice, hares ran up to the feet of my companion, circling his sneakers and running away, a ritual rabbits use to attract a mate or express devotion.

I’ve listened to countless tales of near-death experiences.  In heaven (as these tales claim), everything vibrates—the grass, the trees, the rocks, the sky, the birds, the humans.  All these vibrations harmonize with one another, forming a choir more blissful than birdsong, more magnificent than any conceivable symphony.  Like the euphoria of angelic music, when you nurture nature, you feel it in your soul.