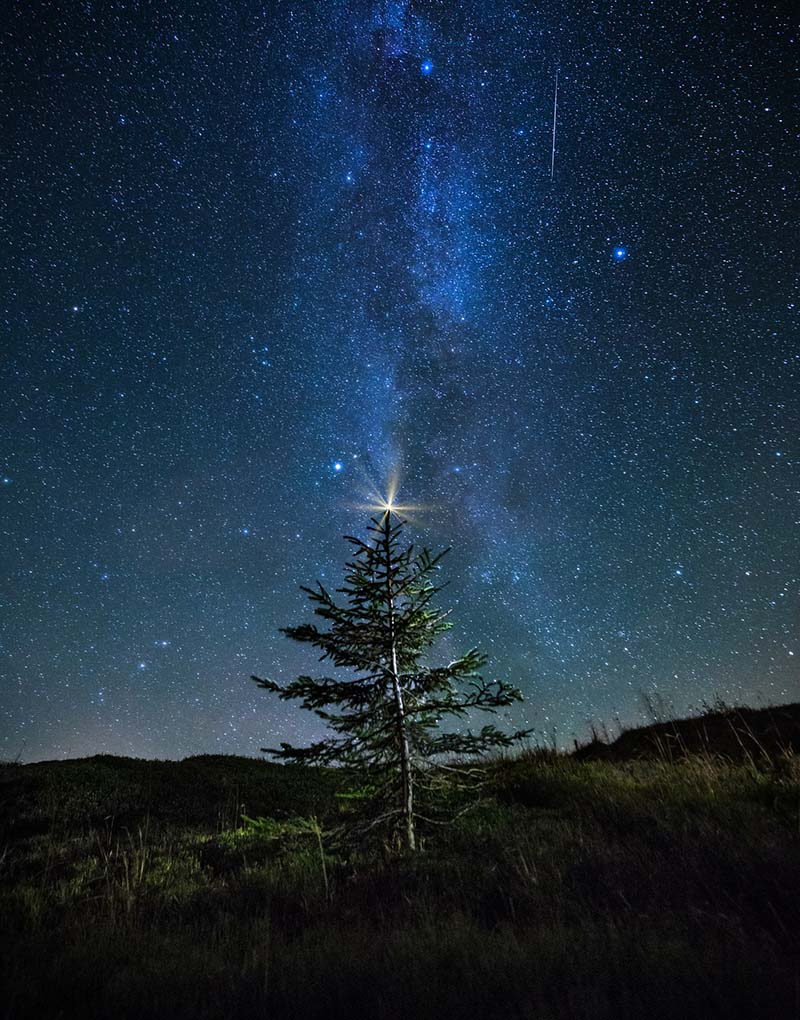 Winter Solstice 2020: it’s cold, it’s dark, and it’s isolated.  As the sun’s light declines to its nadir we might wonder what there even is to celebrate.  Like receiving an outstanding course mark by email and then looking around and realizing with a sigh that nothing tangible has changed in our immediate environs, the turning of our hemisphere to its furthest angle from the sun may feel like just one more misery added to a difficult year.  But wait!  This year Jupiter and Saturn cross paths in our sky and appear to be so far into each other’s social distancing bubble that the two seem as one.

Just as the view we take of our academic progress depends on adopting the right attitude, the perspective of our earthling gaze gives us this unique optical illusion commonly known as a Christmas Star.  The last time Jupiter and Saturn aligned in such proximity we earthlings couldn’t see it and the time before that was a whopping eight hundred years ago.  Now that’s something worth taking a nocturnal study break drive to the country to check out.  Or, failing that, just knowing that this unique event is out there in the solar system can warm our hearts.  There’s magical miracles everywhere if choose to look at life and learning that way!

How We See Is What We See

The psychologist Carl Jung stated that the ebbs and flows of life are something we react to according to our chosen methods; these may not be conscious, but they are real in their consequences.  “It is rather crude and misleading to say that we ‘see what we want to see.’ Rather, it is far more accurate to say that we ‘see how we want to see.’” If we want this year’s Solstice to matter because of the rare conjunction of planets then it will.  Simple as that.  It’s like grabbing an extra hour of essay proofreading before dinner instead of lollygagging on social media.  So 2020 doesn’t have to wind down with lockdown restrictions and dim horizons after all.  Yet this meeting of the planets isn’t simply a moment to be enjoyed for a number of nights; as with any good academic topic, the meaning of an event like the Jupiter-Saturn conjunction is subject to debate and even some recriminations along the way.

Eight centuries is a blink in the eye of the cosmos and the sight in the southwest sky (for most of us) of this year’s Christmas Star invites us to don our critical thinking goggles.  There’s more than one way to see what we see, after all.  For Christians, the appearance of Jupiter and Saturn invites meaningful thoughts about how we can view our interstellar realm as a grand canvas of divinity.  A thinker named Oswald Chambers suggested that “when we choose deliberately to obey him, then, with all his almighty power, he will tax the remotest star and the last grain of sand to assist us.”

The he is God, of course, but from this angle you don’t have to take his word for it.  Even astronomer Johannes Kepler, more noted for giving astrological readings than for being a dogmatic Christian, suggested that the mythical Christmas star in Bethlehem during Jesus’ birth may have been a conjunction of Jupiter, Saturn, and Venus.  Perhaps when celestial objects align we feel impelled to seek out events to match?  Here again is that AU magic: if we see our day as ripe for success then we will steamroll that coursework like honour roll recipients.  We get what we want if we believe in ourselves.  Maybe this solstice is the advent of our greatest successes to date!

Solstice as a Return to Our Roots

Another way of seeing solstice is as a reminder that, in deep cosmic time, it’s the universe that calls the shots in a way that a tick-tocking watch (or a Tik-Tok cell phone app), cannot.  Solstice is famous for being the baseline for countless cultural celebrations around the world and throughout history.  Indeed, for most of human history the stars were an accompaniment to every clear evening and were inseparable from lived experience.  The theorist John Zerzan notes that “for thousands of generations humans rose at daybreak and slept after the sun went down, basking in the glories of sunrise, sunset, and starry skies.  Half a millennium ago, city bells and clocks announced an increasingly ordered and regulated daily life, the reign of urban timekeeping.  With modernity, lived time disappears; time becomes a resource, an objectified materiality.  Measured, reified, time isolates the individual in the force field of deepening division and separation, ever diminishing wholeness” (Zerzan, 51).  We AU inhabitants of modernity would do well to re-calibrate our mental sundials during the depths of winter too; there need not be darkness in our study souls to go with the shadowy realm outside our doors.

As distance students we depend on our inner inertia to drive us forward in our studies.  But our distance from the sun, and proverbially from the light of motivation, could always be, well, more distantiated.  Distance is a relative concern, after all.  Even as our sense of time may waver as the days reach their shortest duration and our motivation evaporates like a too-early sunset over the horizon, it pays to remember that conditions could always be darker.

Perspective is the mother of positive thinking.  So, this Solstice, let’s remember our Canadian far North: “in Grise Fiord, a port on the south coast of Ellesmere Island well within the Canadian Arctic Circle, the sun disappears on October 31 and is not seen again until February 11, more than a hundred days later.  In Alert, the northernmost settlement in the Canadian Arctic on the northern tip of Ellesmere Island, the polar night lasts more than 130 days.  But just a little more than five hundred miles north of Alert, at the North Pole, the polar night lasts 179 days.” (Dewdney, 266).  Half a year of dark, forsooth! And we down toward the 49th parallel, and points further south, have a mere few weeks of dimness to contend with.

Santa and Solstice Around the World

It’s no wonder Santa and his trusty reindeer head South for the 25th, they need some sun!  In fact, many cultures associate solstice with the return of longer days.  From Persia, where the festival is known as Shab-e Yalda, to Arizona, where the Hopi name their ritual Soyal, the end of sun’s descent is hailed as a reminder that the apparent resurrection of our life-giving orb brings with it incrementally longer days and the promise of spring and renewed flourishing (Team Scary Mommy, 2020).  And so, unlike people who bask in their misery all the livelong year, we AU students can enjoy solstice knowing that even on the darker days our minds embody blooming potential.