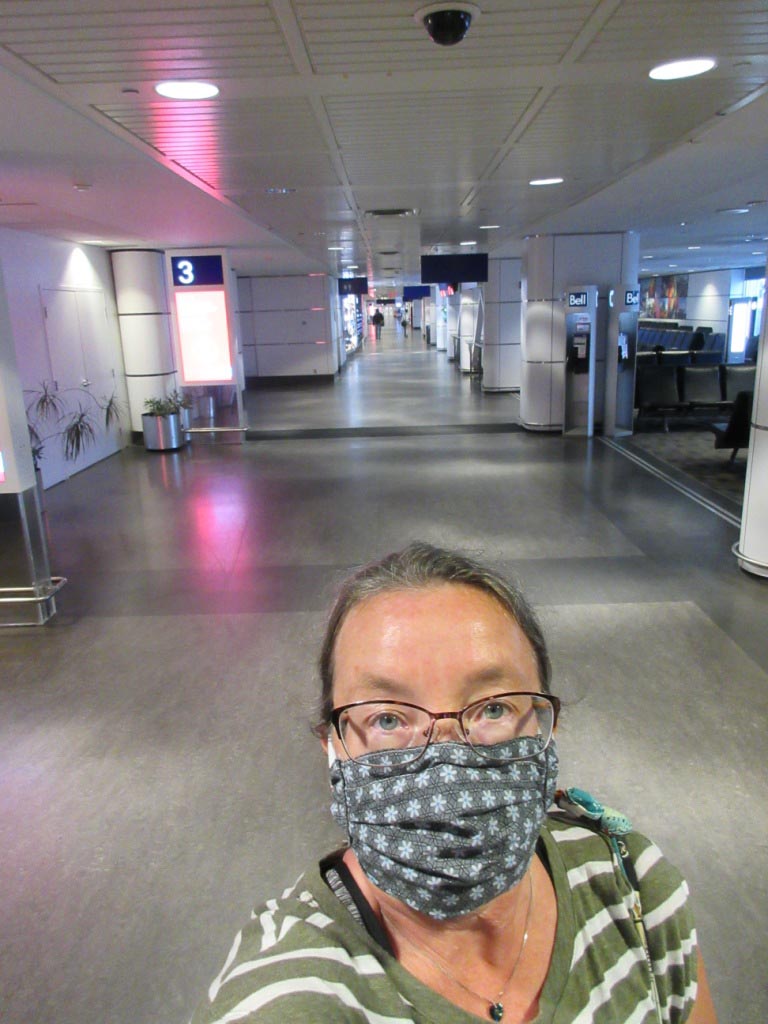 Mask on in an empty Montreal airport

Travel comes with risks at the best of times.  Travelling during a pandemic adds an unsettling new dimension.

It was with some trepidation that we booked flights to Canada’s west coast.  We researched the airlines to learn what measures they were taking to keep passengers safe.  In addition to disinfecting protocols, mandatory mask wearing, and reduced in-flight service, major Canadian airlines were blocking off the middle seats to allow for physical distancing.

The clincher for us was that we could fly direct from Montreal—the nearest major airport to our home in Eastern Ontario—to Vancouver.  To avoid public transportation and ferries on the BC end, we booked a regional flight to take us to within a few kilometres of our ultimate destination.

After much consideration, we reluctantly agreed to the new flight plan.  Cue the ominous music.

Toward the end of June, we got the next shock:  both WestJet and Air Canada announced that, as of July 1, they would no longer block off the middle seats.  Instead of comfort knowing neither of us would have to sit next to a stranger, we were faced with the real possibility that one or both of us would be rubbing elbows with—and inhaling the moist breath of—someone of whom we knew nothing.

Ratchet up the anxiety level!  We would never have booked flights if we’d known all seats could be filled.  Still, we decided to take the risk, uncomfortable though it was.  There was still time before our mid-July flights to order transparent face-shields, which we could wear in addition to non-medical face masks.  Would that be enough to keep us safe?

We’d heard that airports were largely empty, but it still seemed surreal to enter Montreal’s airport and find almost nobody there.  The place had the empty feel of a shopping mall before opening time.  We were screened at the door and had to don our facemasks.

Since we’d checked in online, printed our boarding passes at home, and were travelling with carry-on luggage only, we headed straight to security screening.  One screening lane was open to accommodate the handful of people in line.  There were more security personnel—trying desperately to look busy and important—than travellers at any moment. 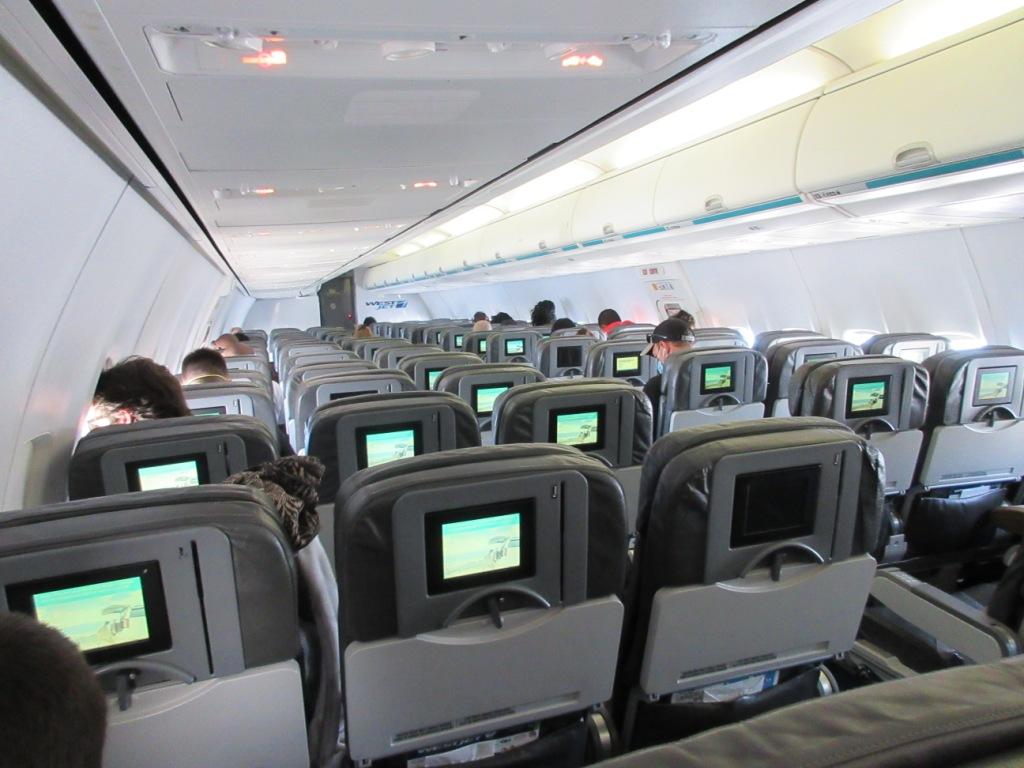 Most of the airport shops were closed, but we found a Tim Hortons outlet open.  A coffee was most welcome before our early departure.  It also provided a legitimate reason to remove my mask while I sipped it.

Physical distance was easy to maintain, rendering the masks redundant for the most part.  There were so few people sitting in the departure area, and there were many vacant areas nearby.

Our first flight was a one-hour hop to Toronto.  Passengers were boarded in stages by zones.  There were so few passengers there was no reason to line up until our zone was announced.  In addition to checking boarding passes and ID (requiring passengers to briefly remove their masks,) airline staff checked each passenger’s temperature with a non-contact device.

We were relieved to find the third seat next to us remained empty.  And we were surprised to find that most of the plane’s seats were empty—the aircraft was barely a quarter full.  As with other flights on this trip, most passengers seemed to be in the 30-to-60 age range and travelling solo.  There were almost no seniors, and very few families.

The Toronto airport, where we were laid over for almost four hours, seemed even more empty than Montreal.  By late morning there were still very few people around, and most of the shops and restaurants were closed.  The departure board for Toronto’s Terminal 3 showed only 32 departures scheduled between 9am and midnight.

With so few people in the airport, we easily maintained a physical distance of many metres.  We removed our masks to eat our packed lunch, since there would be no food available on the flight.  Another coffee meant we could keep our masks off a bit longer, a strategy we noticed many others employed. 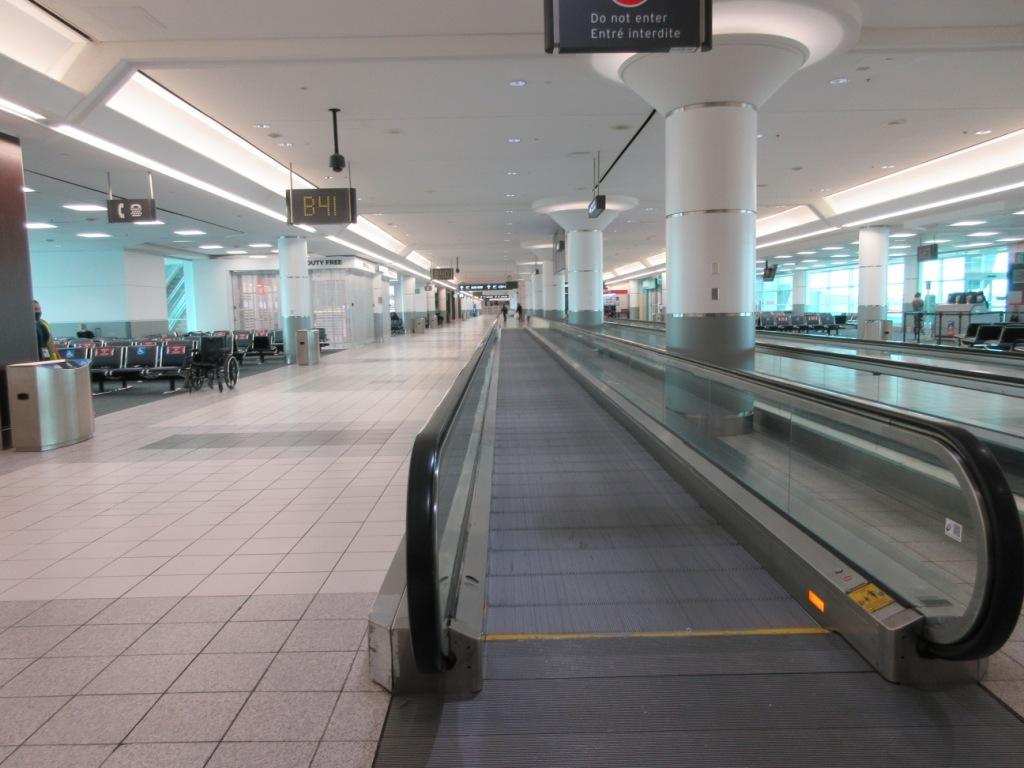 The boarding procedure for the second flight was the same:  boarding by zone to minimize people bunching up and a temperature check.  Judging by the small number of people in the departure area, this flight would be mostly empty too.

We were dismayed, then, to have another passenger claim the third seat beside us.  Faced with the prospect of sitting in close quarters with a stranger for five hours, I immediately put on my face shield (other passengers wore shields, too, but most did not.)

The WestJet cabin crew noticed the crowding in our row, and quickly offered us seats in another row.  We had paid extra for our chosen seats, but safety outweighed the expense.  The solo passenger refused to move, so move we must.

Despite this initial discomfort, the flight was nearly 80% empty.  Some passengers moved to totally vacant rows so they could have three seats to themselves—handy for napping.  The cabin crew offered water and cookies during the flight but, other than that, there was little movement around the cabin.

The Vancouver airport was noticeably busier than the other two we’d been in earlier, but still much less busy than we’d ever seen it.  For our final flight, we had to transfer to the airport’s south terminal.  There is usually a free shuttle, but that service had been suspended.  When we went to the taxi queue, we were given a free taxi voucher in lieu of the shuttle.

Taxi operators servicing the airport face much-reduced need for their services.  Additionally, they need to sanitize their vehicles between every fare.  We tipped our driver well.

The small south terminal, and our onward regional flight, seemed more relaxed about mask-wearing.  Only about half the passengers on our 19-seat flight wore masks, and we didn’t have to undergo temperature checks.  At the end of our 30-minute flight I was glad to remove my mask.  Except for eating and drinking, I had worn a facemask for over 14 hours.

British Columbia doesn’t currently require travellers from other Canadian provinces to self-quarantine (but they do discourage non-essential travel.)  Regardless, after four airports, three flights, a taxi, and more people than we’d been around in four months, we were glad to reach the quiet and relative solitude our destination.

Fast-forward a week to our return journey.  Although we had only two flights on the way home, the timing meant overnighting at a Vancouver hotel.  As before, our regional flight was almost full (full meaning 19 passengers.)  In Vancouver: another taxi ride, another generous tip.

The hotel, one we’ve stayed at previously, seemed almost empty.  Although our assigned room had been vacant for several days, we were careful to minimize what we touched.  After washing my hands dozens of times, I realized it would have been easier to sanitize every surface with wipes as soon as we entered the room.

The next morning, in lieu of the hotel’s usual breakfast fare, we were offered a bagged breakfast of a muffin, yogurt, juice, and a tangerine.  With coffee made in our room, it was an adequate start to the next day.  We’d picked up some portable food at a grocery store to tide us over the rest of the day.

The hotel’s airport shuttle service was still running, and we arrived at the Vancouver airport 90 minutes before our flight.  As we had noticed the previous week, that airport seemed busier than Toronto or Montreal, but not by much.  The departure boards showed 30 flights—mostly domestic—from 9 am to 6 pm.

Our homebound-flight was with Air Canada, and took us direct from Vancouver to Montreal.  This aircraft was larger, with a 2-4-2 seat pattern, but the flight was just as empty as our outward-bound flights.  The seats near us were sparsely occupied, and the back of the plane seemed all but empty. 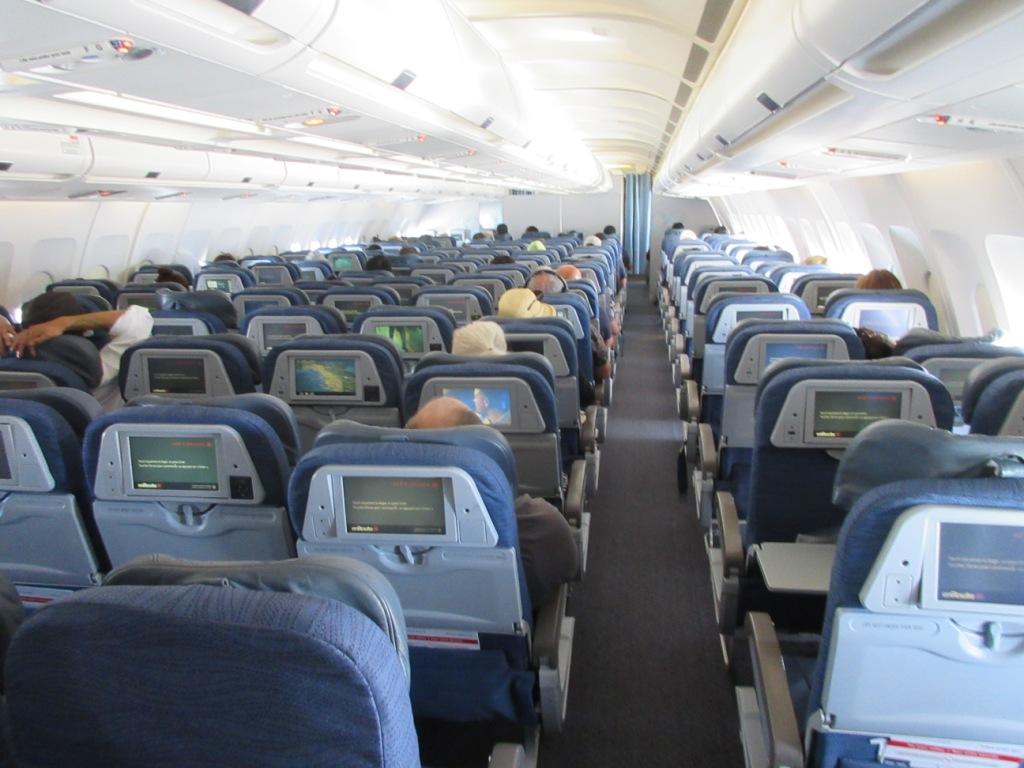 As with our earlier flights, there was no food service.  Cabin crew doled out “Clean Care” kits of a facemask, gloves, sanitizing wipes, hand sanitizer, and a bottle of water.  More bottled water was offered throughout the flight.

We arrived back in Montreal to a mostly-empty airport.  After retrieving our car, we headed home amid Montreal’s rush hour.  To our relief, the highways were as empty as the airways.

Before our trip, and even during our trip, we had misgivings that it was too soon to travel by air.  In retrospect, it turned out to be the best time to be an air passenger:  no crowds and (mostly) lots of space between travellers.  Those conditions—and the cheap fares—are unlikely to last.  I don’t expect to venture into airports again for a long time.

Barbara and her travelling companion voluntarily underwent COVID-19 testing one week after returning home.  They are relieved to have both tested negative.

[Barb Lehtiniemi doesn’t write articles for us as often anymore, she’s busy getting her articles published in mass-release books and other things, but in the early part of COVID, shortly after the first lockdowns had lifted, her look at travelling across country was interesting and entertaining.  Which is why it was published in our July 31 issue, and is now here in the Best of the Voice 2020.]