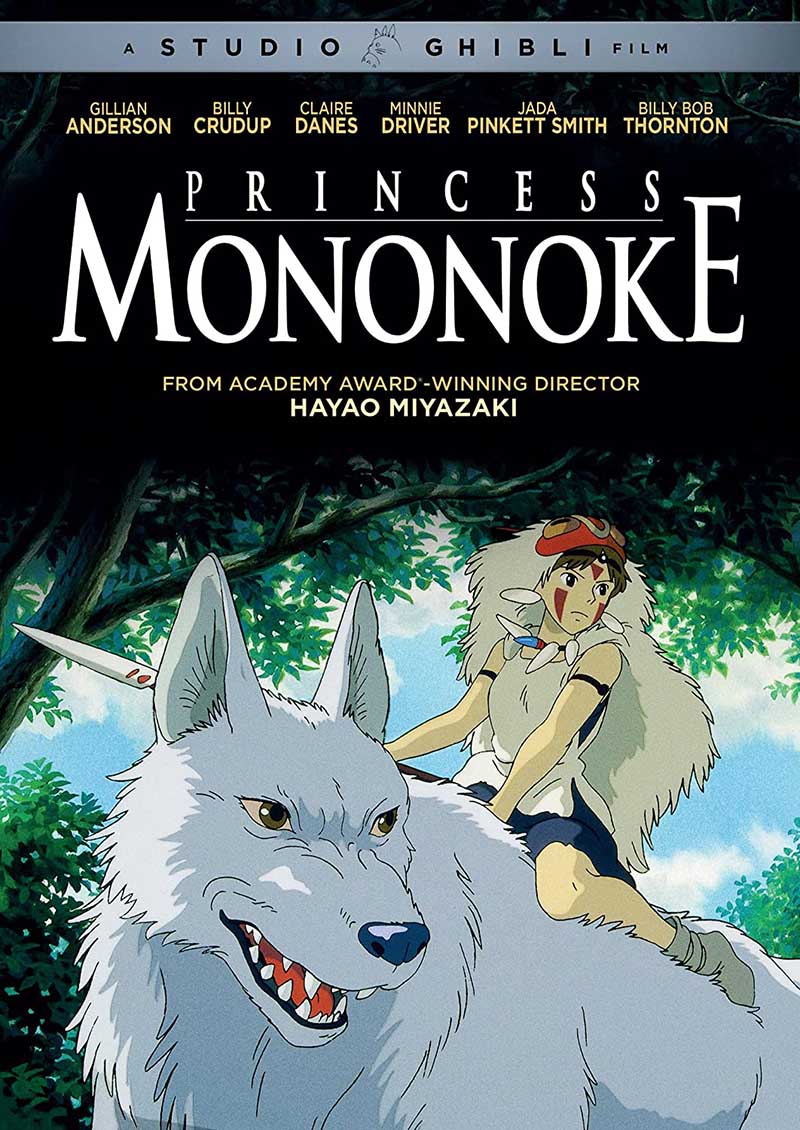 Warning: Spoilers ahead for the movie Princess Mononoke.

If you haven’t seen the movie but intend to, you should probably stop reading now.

After wrapping up Beats from the Basement last month, I’ve been eager to start the new year with an ongoing series that isn’t limited to music or my personal collections.  Given all the forms of media that shape the way we perceive ourselves and the world, the possibilities continue to amaze me.

This also applies to many narrative portrayals of women and girls.  Countless nose burials in library books and keeping my eyes glued to the screen over the years have brought me to characters I believe can inspire, intrigue, or resonate with the audience through their various experiences.  Inspired by Barb Godin’s brilliant Women of Interest, which celebrates the achievements of incredible people throughout human history, Women in Fiction explores the imaginative stories of heroines, villainesses, and everyone in between.

Studio Ghibli, a Japanese animation company famous for developing meaningful men and women characters, is an excellent place to begin our quest.  Its 1997 feature film, Princess Mononoke, is widely revered for its nuanced approach to environmental conflict.  In this epic feudal fantasy, the plot centres on the struggle between the forest allies and Lady Eboshi, a military leader and industrialist whose iron production causes ecological vandalism and the blind, murderous rage of the war deity Nago.

At first blush, we may view Eboshi as a callous and acquisitive governor.  When we consider her motivations, however, we realize the story has no true antagonist.  It is, instead, purposed to show how benevolent people confront ethical dilemmas that lead to flawed behaviours, and, consequently, societal violence that leaves all participants ruined unless they compromise.

Eboshi doesn’t intentionally pursue destruction, but she seems to value the prosperity of her people in Iron Town enough to make whatever devastating sacrifices she deems necessary – even if it’s her own life in question.  She spearheads the town’s development by searching for recruits across the globe – specifically choosing outcasts and brothel workers whose welfare would otherwise be precarious.

From the outset, the latter does sound like the lengths a villain would go to: swaying masses of impressionable and defenseless people to join a cause they don’t understand, à la Gaston in Disney’s Beauty and the Beast, with little thought to their well-being or opinions.  But the compassion and respect Eboshi shows her subjects suggests that she sees their potential not only in producing iron, but as humans able to think for themselves and take control of their own lives.  As any LinkedIn influencer would likely say, a true leader addresses the issues raised by their followers and nurtures their talents without exploiting them.

The labour and resources that emerge from this industry are indeed beneficial to Eboshi, but she ensures her townsfolk quality living through plentiful food supplies, tailor-made weaponry and training, comfortable housing, and healthy relationships that help one another recover from their traumas.  For their efforts, her employees are rewarded with support and independence from systems designed to marginalize them.

This arrangement is reminiscent of wartime periods throughout our history, when women had more freedoms to work and live as men would while their husbands were away.  I’d argue, however, given its greater sense of permanency and that Eboshi is written as a woman entrepreneur, it’s even closer to the real women-led initiatives and communities that’ve evolved over the decades.  Many women who’ve experienced or witnessed discrimination in some capacity would use their means or make connections with likeminded or affected individuals to champion long-term gender empowerment in areas such as the workplace, finance, and healthcare.

Such actions imply that Eboshi has a troubled past and perhaps sympathizes with disadvantaged groups and believes they should be able to live without misfortune.  It’s no wonder some of her community even accompany her on expeditions for fresh materials – or voluntarily defend her from or assume leadership against any sort of trouble whenever possible.  Should she have failed to fulfill their needs, I’d assume they’d try to usurp authority over her.

However, Eboshi’s unyielding ambition comes with a sizable price tag.  To accommodate her residents and financially sustain Iron Town’s growth, she’s left with no choice but to deplete the forest of its reservoirs and disrupt the deities’ work.  She’s prepared to fight for the accomplishments of her supporters, though she shows no actual malice toward her opponents, including protagonists Ashitaka and San.  Unless she’s provoked, she allows them to roam freely in Iron Town.

Morally enigmatic characters like Eboshi tend to have multiple layers that challenge our assumptions about personality and motive.  What her behaviour teaches us is that a tenacious person can still be sensible enough to not act without gauging the other party’s intent first and treat them fairly regardless of their beliefs because they understand how it feels to be territorial.  One personality trait won’t necessarily influence all their interactions; we must also contemplate how different experiences can inform meaning and thus shape a character’s principles.

With these observations in mind, it’s understandable if viewers are initially conflicted between justifying or condemning Eboshi’s actions.  The idea that stability may come at the expense of a phenomenon meant to benefit us all can’t be easily reconciled.  She seems to care for the citizens of Iron Town and want a suitable life for them, but we see that prioritizing them over the world surrounding her will have widespread consequences.

It’s an example of how an admirable character trait can turn into a compelling weakness.  Someone could become so consumed by their goals that they disengage themselves from the bigger picture entirely.  Us city folk with hectic lifestyles could certainly relate, as we often have to remind ourselves to reduce our ecological footprint and reconnect with nature.

Eboshi changes when both Iron Town and the environment are destroyed in the final battle, vowing to adopt sustainable reconstruction practices as the land replenishes itself.

It’s certainly a worthwhile takeaway for the viewer: that you ought to atone for your actions not to gain the approval of others, but because it’s simply the right thing to do.  Finding your inner peace and witnessing contentment around you are reward enough.  I also think Eboshi’s arc speaks to the idea that no matter how well-intentioned and meticulous your vision is, you can still make mistakes when you don’t adapt to the situation or entertain viewpoints that differ from yours.  Only by admitting to your faults can you see the forest for the trees.