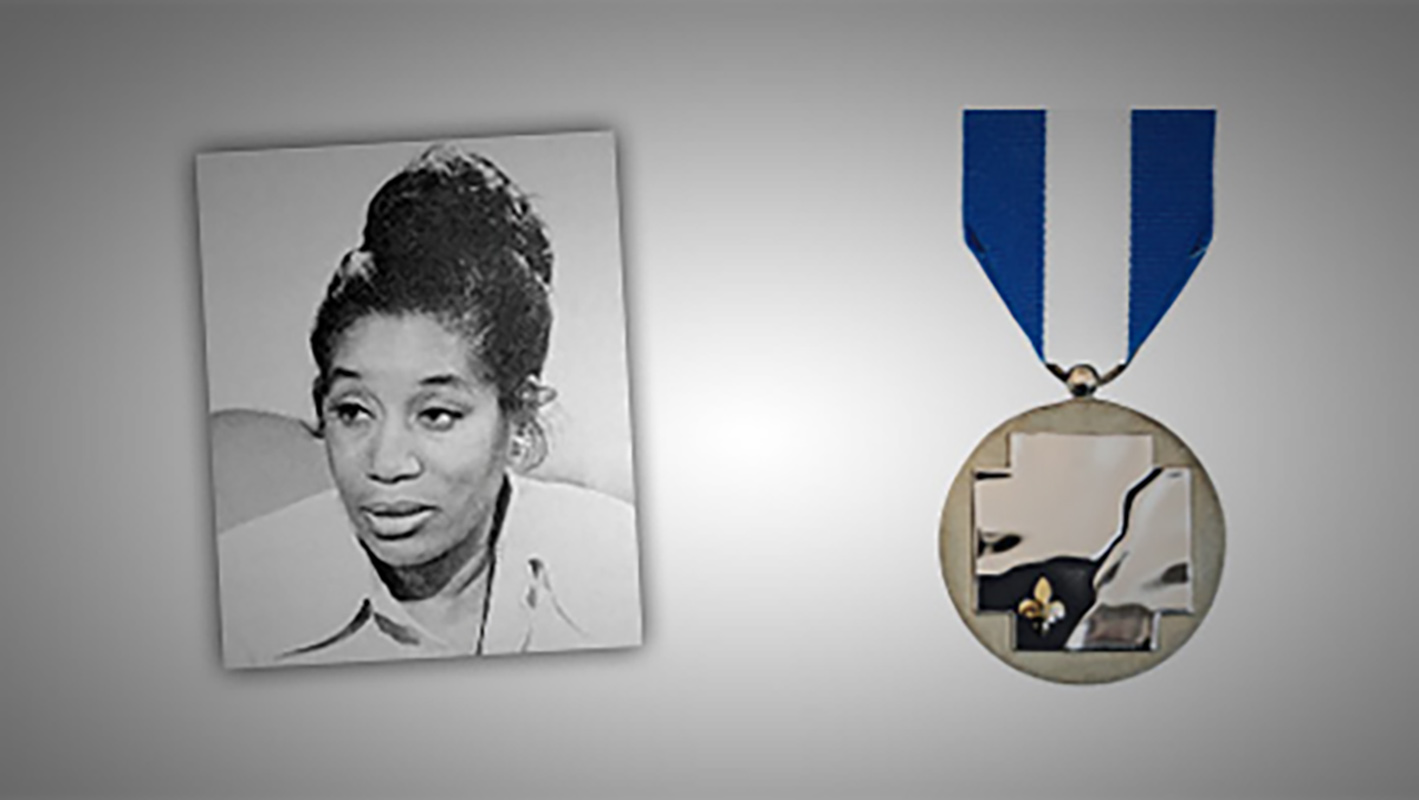 Mairuth Hodge Sarsfield (1925-2013) was born in Little Burgundy, in the southwest borough of Montreal, Canada.  This area was populated mainly by English-speaking African Americans of predominately working- class stature.  Sarsfield was a journalist, researcher, broadcaster and best-selling author, as well as an on-air host for the CBC, CTV, and TV Ontario over the course of her life.

Sarsfield travelled extensively as a diplomat and was positioned overseas for the Department of External Affairs.  She played an important role at Expo 67 in Montreal and again Expo 70 in Japan, where she was an organizer for the Canadian pavilions.  While at the ribbon cutting ceremony in Japan, Sarsfield was overlooked when a Japanese official asked for the Canadian delegate to step forward.  Although Sarsfield was standing directly in front of him, she was ignored while the Japanese official searched for the Canadian diplomat.  At that point Sarsfield spoke up “I’m here” and took the scissors.  Sarsfield was no stranger to this type of bias and was able to move past it, and as said by her close friend, Rita Deverell, she continued to open doors for those coming up behind her.

Sarsfield received her degree from both Sir George Williams College and McGill University and studied Journalism at Columbia.  She began her career as a broadcaster at The Hourglass then moved on to CBC as a researcher and on air-host.  She later joined the civil service and worked as information officer to the United Nations.  Above her desk was a sign stating “Don’t let the bastards grind you down.” She was active in the charity “For Every Child a Tree.”

Mairuth Sarsfield’s married for a second time in 1975.  She had two children who both predeceased her.  Her son passed from an accident and her daughter from breast cancer.  She has one granddaughter.

At the age of 66, Sarsfied published her first book.  No Crystal Stair, a novel which delves into the Canadian reality of functioning as White while surviving as Black.  The book was criticized for not characterizing a darker picture of the black lifestyle in Montreal in the forties.  Sarsfield responded to the interviewer “Being black is a lot of fun – or can be.  You don’t have to bellyache to write a good book.” No Crystal Stair was also criticized for not being well written, and pretty well disappeared for many years.  In 2005 the Women’s Press republished her book, ultimately reviving it and although the quality of the writing was still met with criticism, it was included in Canada Reads 2005.

Sarsfield received many awards for her Canadian-theme-based Pavilions at the World’s Fair.  She also won the National Congress of Black Women’s Foundation’s First Literary Award.  She was honored with “Mairuth Sarsfield Day” by the City of Cleveland for her work with the United Nations in Nairobi, and in 1985 received the award of Chevalière from the National Order of Quebec.

Mairuth Sarsfield passed away on May 7 at the age of 83, following complications from a stroke.