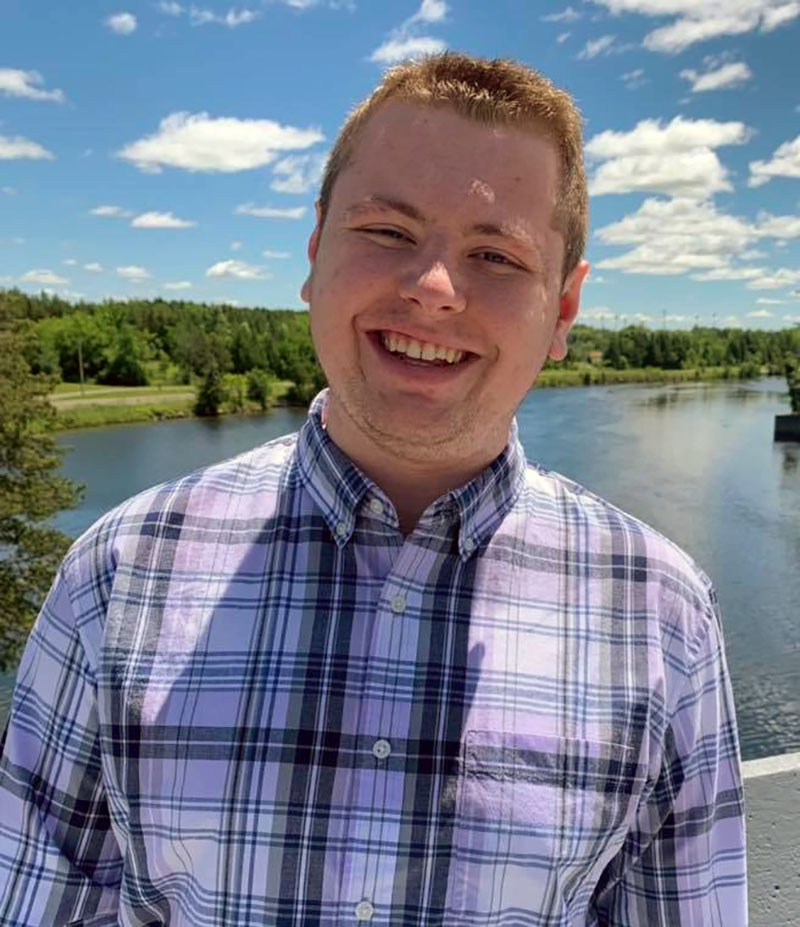 The Voice Magazine recently had the chance to chat with William Logan from Edmonton, Alberta, located on Treaty 6 territory and a traditional meeting ground and home for many Indigenous Peoples, including the Cree, Saulteaux, Niitsitapi (Blackfoot), Métis, and Nakota Sioux Peoples.

William grew up in Peterborough, Ontario, before moving to Edmonton a year and a half ago for work and starting his studies at AU “shortly after.”  He is currently completing a 3-Year Bachelor of Arts in Sociology.  He stated, “I have a few visions in mind for once that’s complete, including the BPA in Human Services or perhaps a college diploma in emergency management, [or] social work.”

He “work[s] in Student Affairs at another university in Alberta managing student housing and supporting a few other portfolios including suicide prevention and sexual violence prevention.”  He continued, “My goal is to continue to work in Student Affairs for the foreseeable future, so my AU degree and other education needs to bolster my opportunities within the SA field.”

When asked what he likes to do when not studying, he had to think about it, saying, “Wow.  This has me reflecting and taking inventory of my time over the past few months.  I don’t think this is supposed to be an existential question but time and how we use it says so much about us.  With that in mind, when I’m not studying, I spend my time developing cures for obscure viruses and single-handedly building schools.  Just kidding!  I work 37.5 hours a week (+) so that takes up a lot of my time.  My free time honestly is usually spent on bubble baths, Netflix, and pre-COVID spending time with friends.  Walks around the neighbourhood keep me grounded.”

William chose himself as the one person who had the greatest influence on his desire to learn, explaining, “Not to be conceited.  I’ve dropped out of post-secondary twice because of disinterest, so choosing to wait for the time and place it was right for me instead of sticking around miserably has been the great influence on my desire to learn.  Also, my doctor and ADHD medication.”

However, he has “definitely [been] enjoying” online learning so far, stating, “The online format is less important to me than the self-paced nature, which is the game changer for me.  I’m sure all my AU classmates can relate to the benefits of having the flexibility to make progress through your courses at your own speed.  When I have a busy work week, I might make a bit less progress on my courses but I can make up for it the next week.  The obvious challenge associated with that is time management and keeping yourself on track, but so far so good!”

However, like many AU students, William has wavered about continuing his schooling at one point.  He stated, “I’ve always known I would have to complete my BA one day to advance in my career, but the biggest pause was definitely the year I spent in Edmonton without taking courses.  That was for two reasons, I needed a break, and I was adjusting to a new job and new life!  One of the benefits for me with Athabasca was that the courses are more flexible (in my experience) so I can gear my papers and applications to practical issues that relate to my personal or professional interests.  If it weren’t for that applicability, I would struggle a lot.”

His most memorable course so far has been SOCI 321: Sociology of Work and Industry.  “All my courses and faculty this term were phenomenal, but the course work of 321 was the most interesting for me.”  He has also enjoyed communication with tutors.  He continued, “For me, I contact them right away with my ASD letter and like to connect on the phone in the first week or so.  My understanding is that practice is generally considered a smart one, but I’ve also just enjoyed chatting with them.  Usually when I talk to my tutors, I ask my pertinent questions about the paper I’m working on, and then just chat about their views on things I find interesting.  I used to fall into the trap of asking them about their research whether it’s meaningful to me or not.  Lately I’ve found that even if my thoughts/questions aren’t directly related to the course readings/their research they don’t mind at all.  I’ve had some wonderful conversations with my tutors about random books or political events completely unrelated to the course.”

When asked that he would do as the new president of AU, William replied, “This is a lofty question.  I have no idea.  I’d like to throw out some grand statements about revolutionizing AU’s research or developing the MOST innovative student services in the world.  The honest answer is that my first project would need to be learning the pedagogy behind online learning.”  He continued, “As someone who works in Student Affairs, I’ve had the opportunity to know university presidents and I think they have a really tough job.  The truth is, I think it’s harder for them to make radical changes than we, as students, think it ought to be.  Perhaps a good first project would be meeting with students.  Any leader who doesn’t talk directly to the ‘bottom level’ (Excuse the hierarchal expression) is missing the point of being a leader.”

And his pet peeve? “I have ADHD and/or I’m a naturally very fast-paced person and talker.  Extremely slow talkers are wonderful people who I have to be conscious about having empathy for.  Folks could be talking slow for a number of reasons, and they don’t owe me or anyone else an explanation but, my natural speed setting is incompatible with slow talkers, so I have to be mindful of that.”

William would choose actor Timothée Chalamet as the famous person, past or present, with whom he would like to have lunch “for all the expected reasons.”  He explained, “He’s so talented!”  While this was an easy answer, choosing the actual lunch was a little more difficult to answer.  “Of all the questions on this list, what lunch I would have with Timothée Chalamet stumped me the most.  He can choose!”

When asked about his most valuable lesson learned in life, William stated, “Two quotes come to mind – forgive me for breaking the rule of ‘most valuable’ which seems to request one answer.  Although, I think they’re connected!  Glennon Doyle: Every time you’re given a choice between disappointing someone else and disappointing yourself, your duty is to disappoint that someone else.  Your job, throughout your entire life, is to disappoint as many people as it takes to avoid disappointing yourself.  André Aciman: We rip out so much of ourselves to be cured of things faster that we go bankrupt by the age of 30 and have less to offer each time we start with someone new.  But to make yourself feel nothing so as to not feel anything – what a waste!”

William described his proudest moment in life stating, “I think the proudest moment of my life was the first time I used suicide intervention skills to save someone’s life.”  He continued, “If you haven’t had the chance to, I highly recommend everyone reading this take a course in suicide prevention/intervention if you’re up to it.  LivingWorks Education has a fully online, at your own pace, course called ‘LivingWorks Start.’”

As for what distinguishes him from other people is that he balances “four different mental illnesses.”  He continued, “I’m trying to live by my values that we should talk about mental health as openly as we do other medical conditions so there’s that!”

His “ultimate book recommendations for anyone who is inclined to pick readings based on a classmate’s random opinion,” were Untamed by Glennon Doyle, Gifts of Imperfection by Brené Brown, Call Me by Your Name by André Aciman, and “if you prefer happy endings also read the sequel Find Me.”  For Hunger Games fans, he recommends The Ballad of Songbirds and Snakes by Suzanne Collins.  “This book seems to be relatively poorly received but I consider it one of the best I have ever read.”  He is also currently “re-watching The Office before it’s removed from Netflix,” Grey’s Anatomy, and “think[s] Little Fires Everywhere is a TV show that anyone can benefit from watching.

As a final note, William would like students to “Check out the free counselling and other wellness services available to us as students.”  (Homewood Health, AU’s online Wellness Support Program, offers students 24/7 support.)  Best of luck William!