Articles
The Voice
Joining Chicken Soup for the Soul’s Family 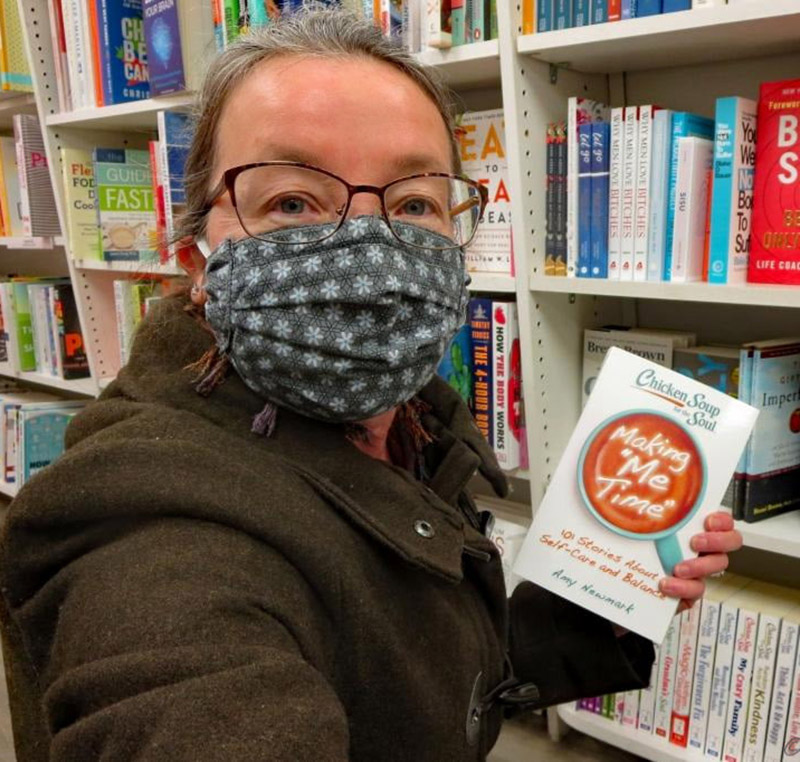 “A Chicken Soup for the Soul story is an inspirational, true story about ordinary people having extraordinary experiences.” – chickensoup.com

The first thing I did when I received my copy of Chicken Soup for the Soul‘s “Making Me Time” anthology was to turn to the Table of Contents to find my name.  Out of the 101 stories in the book, mine, “A Daily Hour Just for Me,” was number fourteen, on page 45.  My first published book credit!

Writers never get tired of being published, and each new platform reached provides a fresh burst of excitement.  From my first article published in The Voice back in 2013, I’ve gone on to have hundreds of articles published in newspapers and magazines, both print and online.

But Chicken Soup‘s “Making Me Time” was the first time I had a paid piece in a book.

I was long familiar with the Chicken Soup for the Soul series.  Started in 1993, over 250 books have been published under the Chicken Soup banner.  Each themed anthology contains over a hundred short pieces.  All the stories are true, and all are upbeat and positive in tone.  About a dozen new Chicken Soup titles are released each year.

A few years ago, I met an Ottawa-based writer who had just been published in a Chicken Soup for the Soul anthology.  That was the first time I realized that anyone could submit a story for consideration.  You didn’t have to be famous, or even an established writer.  Some writers have their first published piece in a Chicken Soup book.

Soon after, one member of my local writers’ group submitted a Christmas-themed story she’d written to Chicken Soup for consideration.  Everyone in our group was delighted when her piece was accepted.  Months later, it appeared in one of Chicken Soup’s annual Christmas anthologies.  My writing friend went on to have two more pieces accepted in subsequent CSS books.

As a published contributor to a Chicken Soup book, my writers’ group colleague was able to arrange a virtual visit by Chicken Soup publisher and editor-in-chief Amy Newmark to one of our group meetings.  That visit, by video link, offered our group the opportunity to ask questions and learn more about what the Chicken Soup team looks for in a story.

I began watching the Chicken Soup website for upcoming book themes.  Their Submit Your Story page usually lists five or six topics they’re seeking pieces for.  Whenever I saw a theme that resonated with me, I’d draft up a piece.  If I was satisfied with it, I’d revise it and submit it for consideration.

I submitted my story for the “Making Me Time” theme back in December 2019.  The deadlines for several titles were extended in early 2020 due to the pandemic, and it wasn’t until October 2020 that I received the email:  they wanted to publish my piece!

After signing and returning the publication agreement, I was later given an edited version of my story to review.  The Chicken Soup editing team proposed only light edits to my piece, all of which I agreed with.  With the edited version, they also provided the quotation they proposed to appear at the beginning of my story, and I had the opportunity to give my feedback on it, or offer a different quotation if I wanted.

In the weeks leading up to the February 2021 publication date, the Chicken Soup team kept me updated by email about timelines for the book.  Their marketing partner contacted me to ask about local media outlets so they could send out press releases.  I was also asked if I was willing to be interviewed by local media about my story in the book.

A few weeks ahead of publication date, a box of books arrived at my door:  my ten free copies of Chicken Soup for the Soul‘s “Making Me Time.”  Each CSS contributor receives ten copies of the book, in addition to the $200 they get paid for their piece.  Finally, a book in my hand with my name in it!  (The first signed copy went to my mother.)

Publication day, February 16, launched a week of social media activity.  The Chicken Soup team provided graphics for posts, and tips for where and what to post.  The publishers held a Twitter launch party, which offered an opportunity to connect with other contributors to the book.

The highlight of the week was a Zoom call for first-time contributors with Chicken Soup for the Soul‘s publisher and editor-in-chief, Amy Newmark, along with other members of the CSS team.  Amy congratulated the new contributors, and declared we were all now part of the Chicken Soup family.

I do feel like I’m part of the CSS family.  Everyone I’ve dealt with at Chicken Soup has been warm and enthusiastic, and the whole process has been a positive experience.

Many contributors go on to be published in several Chicken Soup anthologies.  I aim to be one of them.

If you’re interested in submitting your own story to Chicken Soup for the Soul, check out their upcoming titles at  www.chickensoup.com/story-submissions/possible-book-topics, and be sure to read the Story Guidelines for clues to essential story elements.  Successful contributors receive $200 for their piece, ten free copies of the book their piece appears in, plus additional benefits.

Worth a Second Look – Cooking Up A Storm