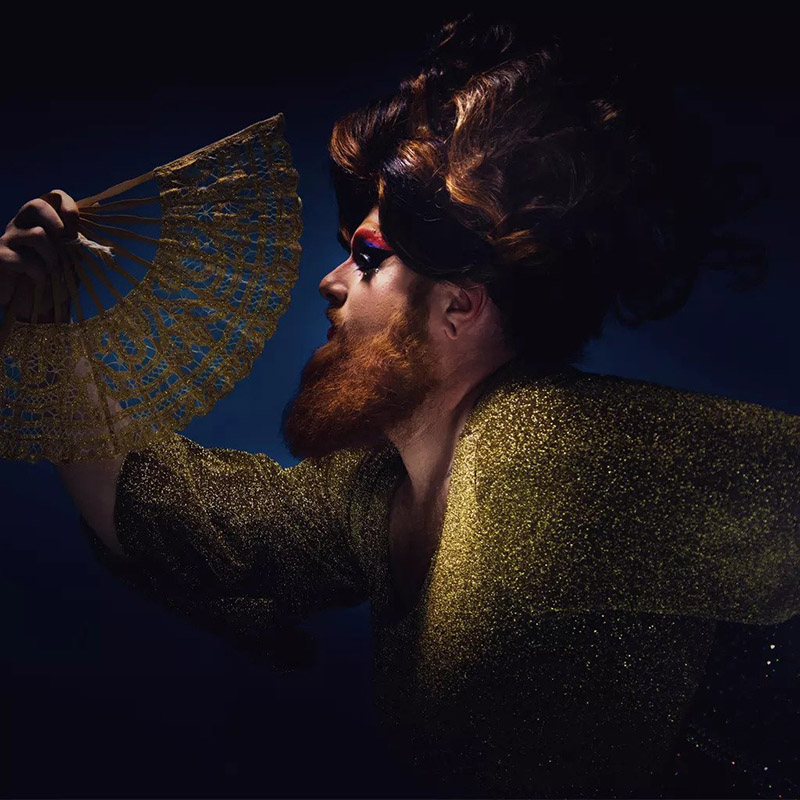 The Voice Magazine recently had a chance to chat with Ginger Snap (Bryan Eden)—“The Princess of Everything,” the current reigning Ms. Gay Vancouver XLI, who lives in New Westminster, British Columbia, on the unceded traditional territories of the Coast Salish Peoples of the QayQayt and Kwikwetlem First Nations.

Ginger mentioned that her pronouns are she/her while in drag, and he/his out of drag.  Ginger is currently enrolled in the AU University Certificate in Management Applications, with plans to open up [her] own business,” stating that she wants to “open up a mobile tire company and start my journey into entrepreneurship.“

Ginger spent most of her life in Surrey, British Columbia before moving to Calgary, Alberta, after graduating high school. In Calgary, she “worked in the tire industry, working on semi-trucks,” before eventually driving semi-trucks in the mountains for several years.  After several accidents, Ginger was diagnosed with PTSD and could no longer drive; she decided to change careers and go back to school.  She has been living in New Westminster, just outside of Vancouver, for the past several years and says, “I absolutely love it.”

When not studying, Ginger described her drag involvement, stating, “You know, what I really enjoy about the drag is the charity aspect behind it, and then being able to help people within the LGBT community.  And especially, that’s what I like about being about Miss Gay.  I’m a representative of the Rhinestone Phoenix Charity Foundation, which is a charity foundation that raises funds for an annual chosen charity.  I love doing that kind of stuff and that takes up a fair amount of my time.”  She continued, “But when I’m not doing drag stuff, I love being out off-roading and hiking and camping deep out in the woods.  When I’m not driving vehicles, I’m usually fixing them!”

As for the person that had the greatest influence on her desire to learn, Ginger stated, “I’d have to say myself, to be honest with you.  I’ve had a lot of people in my life that have told me the opposite, that I’m not able to do certain things, and that I’m not smart enough.”  She continued, “Now here I am at [age] 32 back in university and just doing my best to prove everybody wrong.”

Her experience with online learning has definitely had some challenges, “But overall, it’s been enlightening.  It’s been positive.  I’ve definitely have learned a lot.”  She stated, “What I really enjoy is being able to have the flexibility to kind of learn at my own pace.  It allows me to continue working on my drag career, to do all the charity work that I do.”  It also allows her to take time for “a bad mental health day or a severe ADHD day.”  She continued, “And vice versa, if I have a hyper focused day, I can hammer out twelve hours of school no problem, which you can’t do in a traditional setting.  But with that comes certain sacrifices, such as you can’t put your hand up in a class and ask an immediate question.  It takes a little bit of time to get answers to questions you have.  I’m learning that, you know, you need to kind of take that into consideration with your pace.”  In general, she finds communication with her tutors good, stating that although there is a lack of having questions answered immediately, tutors make up for this by “making sure that every question is answered.  They do their best.”

Her most memorable course so far has been ORGB 364: Organizational Behaviour, stating “I love learning about the human species on a macro level and how we interact with each other.”  She is also enjoying LGST 369: Commercial Law.

Ginger spoke briefly about her recent struggles when she wavered about continuing with her schooling.  After the breakup of a relationship, she experienced a period of homelessness, before finding an apartment downtown Vancouver.  Unfortunately, building renovations meant eviction once again.  After another period of homelessness, Ginger became involved in “a very controlling and mentally abusive” relationship, which deteriorated her mental health and “slowed down [the] pace of [her] schooling.”  In the end, she spent last summer “camping out in the woods and off-roading and overlanding, which started off being a pretty positive experience.”

Because of AU’s flexibility, Ginger stated, “I was able to live in my truck and just use the data off my phone as a mobile hotspot, and I was able to continue on my school.”  Unfortunately, after suffering an injury during a performance, Ginger was sexually assaulted, which greatly affected her mental health, as well as her schoolwork once again.  Despite setbacks, Ginger has remained focused on her long term goal of getting her company up and running.

By overcoming these barriers, Ginger plans to “give back to the community that has already given so much to me.”  She stated, “I want to be able to dedicate a certain percentage of my proceeds to charity.  That’s definitely my biggest motivator to keep going.  I know that if I can get through this and represent a positive way to overcome things, then that’s what I want to do.”

Although Ginger is uncertain that she is able to fully answer a question about what she would do as AU’s new president, she stated, “But what I do see on a surface level is that they are taking initiatives to continuously improve in this six or eight months that I’ve been doing courses.  It seems like there’s already great updates to the website.”  She stated, “I don’t think I would change anything.  I I feel like the school is on a good course ….  [While] there’s always room for improvement.  I think the school is doing great things already.”  She also mentioned AUSU’s new 2SLGBTQIA+ Discord Server.  (Full disclosure: This reporter was involved in the creation of the server.)

As for pet peeves, Ginger stated that she is not impressed, “[w]hen people don’t wear their masks when they’re out in public, when they’re not following protocols and having all these parties.  I have one thing to say—It’s ‘stay home, stay safe, and wear your masks, please.’  Just try and stay positive through all this because it may seem like it’s going on forever, but it is only temporary.”

Ginger would like to meet entrepreneur and business mogul, Gary Vaynerchuk, who has “a lot of great views on modern ways of doing business and how to treat your employees right.”  She stated, “I really enjoy his non-traditional view on business and ultra-modern view on business.  I take a lot of inspiration from him.”  And that lunch would be at a “local drag bar called The Junction here out on [Vancouver’s] Davie Street, showing one of their delicious burgers or poutines.  Honestly, it’s really really good food, and then we’d finish off with a boozy milkshake over at Mary’s on Davie there and have a great positive experience for sure.”

As for non- AU books, Ginger admitted that she has not “read a book (like a good book) in close to a decade” after reading the Elenium series by David Eddings as a teen, which “ruined all of the books for me.  It was just so freaking good!”  However, she “want[s] to start getting back into reading.”  As for TV shows, Ginger just finished watching Schitt’s Creek, which she was “pleasantly surprised, it was a great show,” and is also watching Letterkenny.

Ginger has learned two main valuable lessons in life.  Firstly, she stated, “The first one I learned in my early 20s, which was ‘Question everything but with an open mind,’ and ‘Be willing to have your mind changed, hopefully for the better.’  The second lesson has been more recent, where things just do not go according to plan.  She stated, “You’ve just got to kind of take life as it comes at you, and just be grateful for what you have when you have it.  And try and remind yourself of the positive things in the now.”

Ginger’s proudest moment is life was difficult to pinpoint, as she described many proud moments throughout her teens.  “I was pretty high achiever and won lots of trophies in sports.”  However, now, she stated, “What I’m most proud of is that I’m getting my life back together.  I’ve got a beautiful home in New West, and I’ve got my cat and my dog with me.  I feel like I made the right choice with my schooling program.  I feel like I’m making the right decisions.  I’m just proud of myself for not giving up.”

One thing that distinguishes Ginger from others is her drag, stating “On top of it, I’m a hetero queen, so I’m one of the very few—I’m definitely Vancouver’s premier hetero drag queen.”  Ginger hopes to inspire other men that “they are also able to do what they want and they can wear makeup and they can feel pretty.  Gender stereotypes don’t necessarily have to exist.”  She continued, “On top of that, I also identify as genderfluid,” stating “I don’t identify as a man, or I don’t identify as a woman.”  Instead, she identifies “with the energy that I’m feeling on the day.  Some days I feel more masculine; some days I feel more feminine.”

As a final note, Ginger let students know, “I’m here to show the world that you could do anything that you want to do.  I’m here to break down those barriers and build those bridges between the LGBTQ+ community and the straight, cis-community.  I want to inspire people to feel beautiful when they wake up in the morning and to work toward feeling more beautiful by the time they go to bed.  And to remember — Ginger loves ya!”  Best of luck Ginger!