Articles
The Voice
Homemade is Better—S’mores 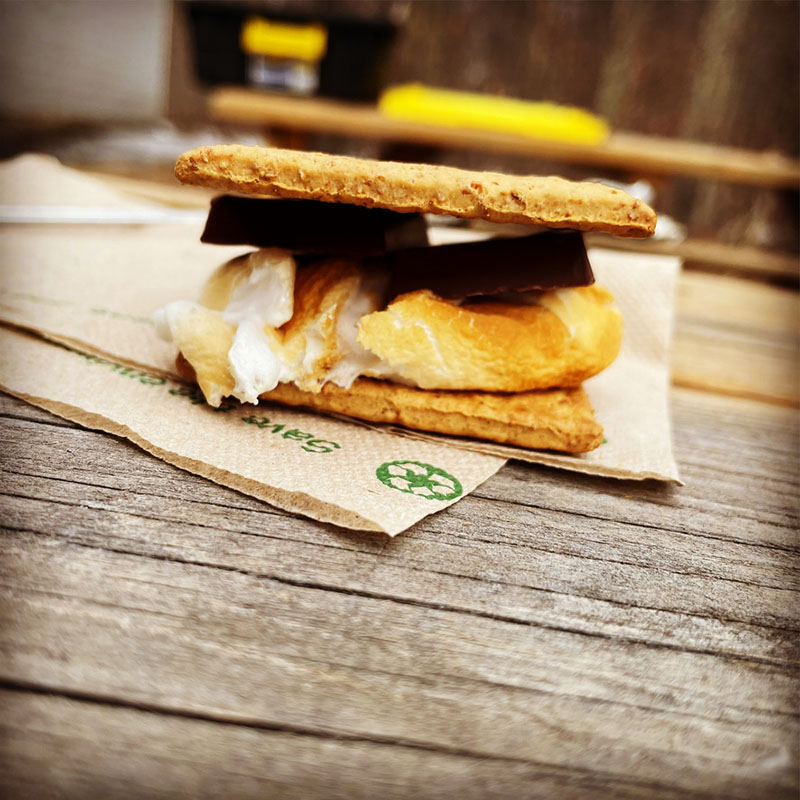 There is something about a campfire that is captivating.  The way that flames move, the crackling sound of wood, smell of the smoke—ok, maybe the smoke isn’t as captivating, but cooking over a fire sure is!  This past weekend, our twins and I got together with our cub scout pack and enjoyed a day of outdoor activities.  I got to show some youth how to cross-country ski, curl, and what a chucksled is.  Google that one; it is a neat scouting activity!  We also roasted hot dogs over a fire and made the elusive s’more!  I call it elusive because it seemed like none of the Cubs I was with could get that perfectly golden colour on their marshmallow.  It was so foreign to them all.  A few tried but ended with the inevitable taste of defeat, a blackened sweet!   I also lead a group of Beaver Scouts (age 5-8), watching them make s’mores is a treat all to itself!!

The s’more has always been popular with scouting groups.  I say scouting groups because the same people started the Girl Guides and the former Boy Scouts (now called Scouts Canada).  Scouts Canada officially became duel gendered in the early 1990s.  But groups were allowing females to join before that.  Rewind to the early 1900s and Lord Robert Baden-Powell, his sister Agnes, and his wife, Lady Bing, were responsible for creating the scout movement, including the Girl Guides. 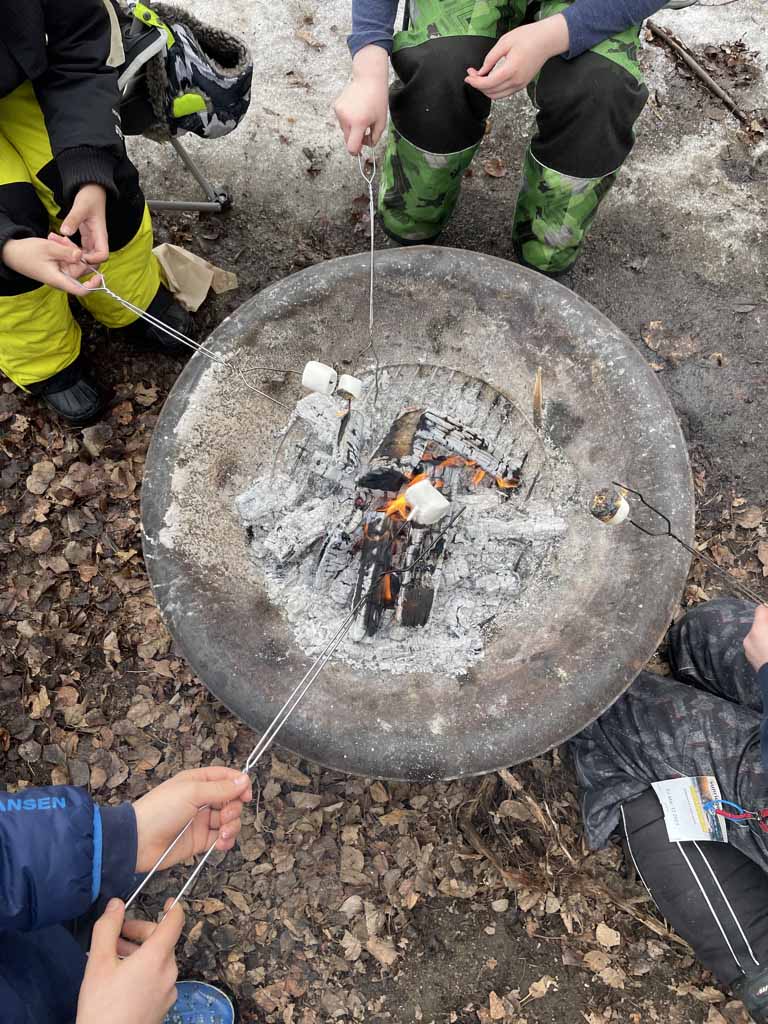 started to appear in cookbooks as a graham cracker sandwich.  Its name was changed in later editions, presumably because you want some more after the first!  It is traditionally made with three ingredients: 2 graham crackers, 1 large marshmallow, and a piece of chocolate (something flat that you have enjoyed previously).  But there are infinite variations that one could use to create a s’more still!   I have tried using a Reese’s Peanut Butter Cup, changing the crackers for some that have a chocolate topping, using flavoured marshmallows, and also homemade marshmallows!  You could also use different chocolate types and add in a salty item like bacon if you’re using dark chocolate.  Be cautious with this, though, as some flavours overpower others, and you lose the balance.

The key to a golden marshmallow is not to pick the hottest part of the fire but rather the coals.  Let your fire die down a little bit, so you have a nice hot bed of coals.  If you’re using a gas stove or propane firepit, this obviously changes.  Movement is the second tip.  Keep rotating the roasting stick over the heat source, but give it a good six inches or more.  If you keep turning the marshmallow and have a decent gap between the flame and the marshmallow, you’ll quickly get that golden look.  Don’t turn it too fast, though, just nice and easy, a little like a rotisserie on a BBQ.

Once you get that beautiful golden-brown and delicious marshmallow, carefully transfer it to one of your graham crackers.  I like to use the cracker to pull the marshmallow off the roasting stick.  Then I add on the chocolate and the top layer of cracker.  Lastly, I admire the creation I’ve just given myself and eat it, savouring every bite!  Roasting marshmallows and making s’mores is still a reminder of my childhood simpler days. 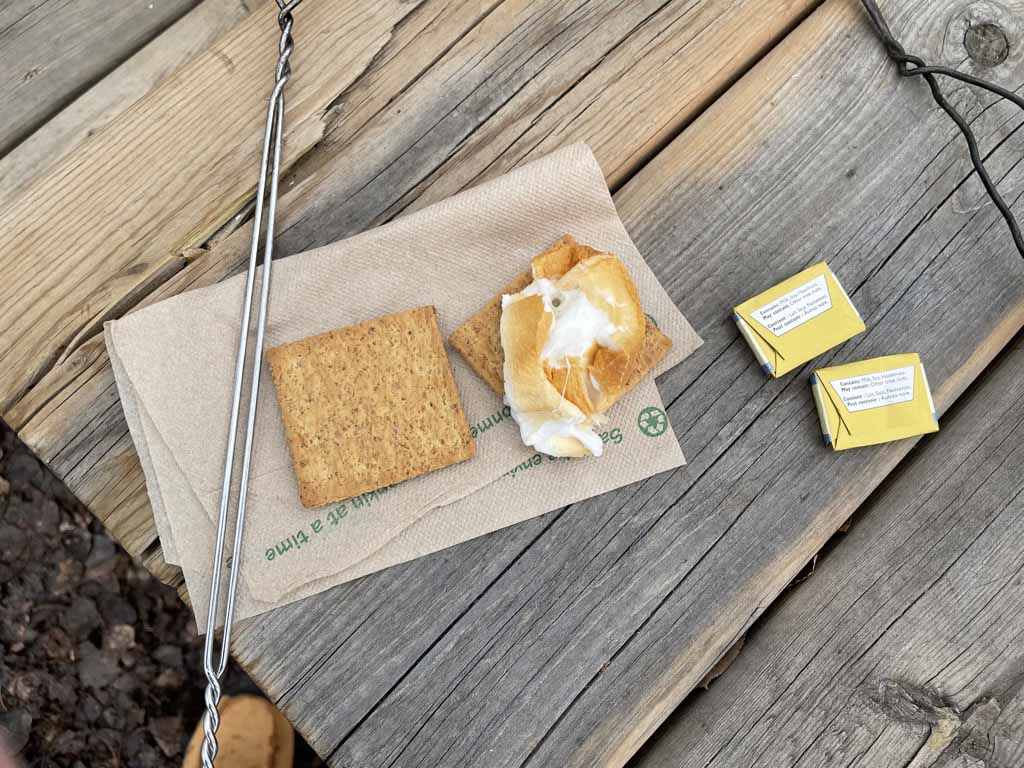 But what if you can’t get to a campfire or you don’t have a gas stove?  Well you can still make s’mores.  Crank your oven to 350F.  Get out a sheet pan and cover it with parchment or spray it with pan spray at the very least.  But really, parchment makes clean up much more manageable.  Go to a dollar store and look for some; your local grocer likely carries it as well.  Once your oven is ready, place some graham crackers on the pan, add your marshmallow and roast until the marshmallow is just starting to melt or turns golden brown.  Remove the sheet pan, and carefully add your chocolate and top layer.  Let it cook for a minute, then get ready to buckle up cause you’re taking the Graham Cracker Express to Flavourville!

I hope to get out and enjoy some more of these treats, I know our scouting sections will have many more days of this! 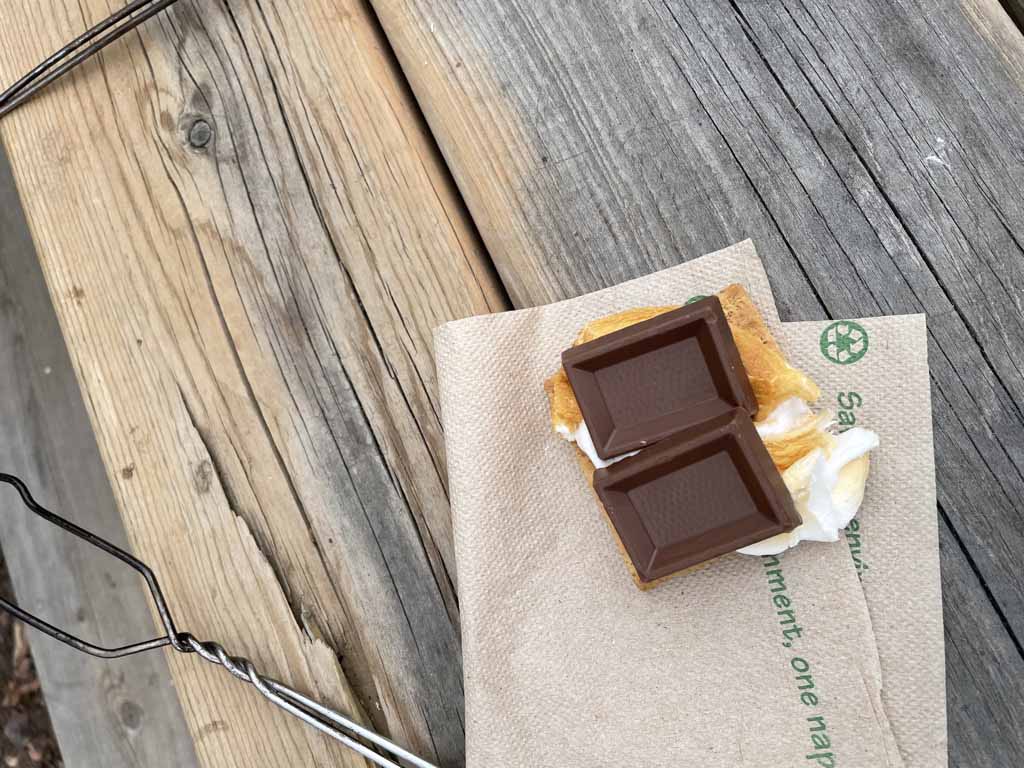