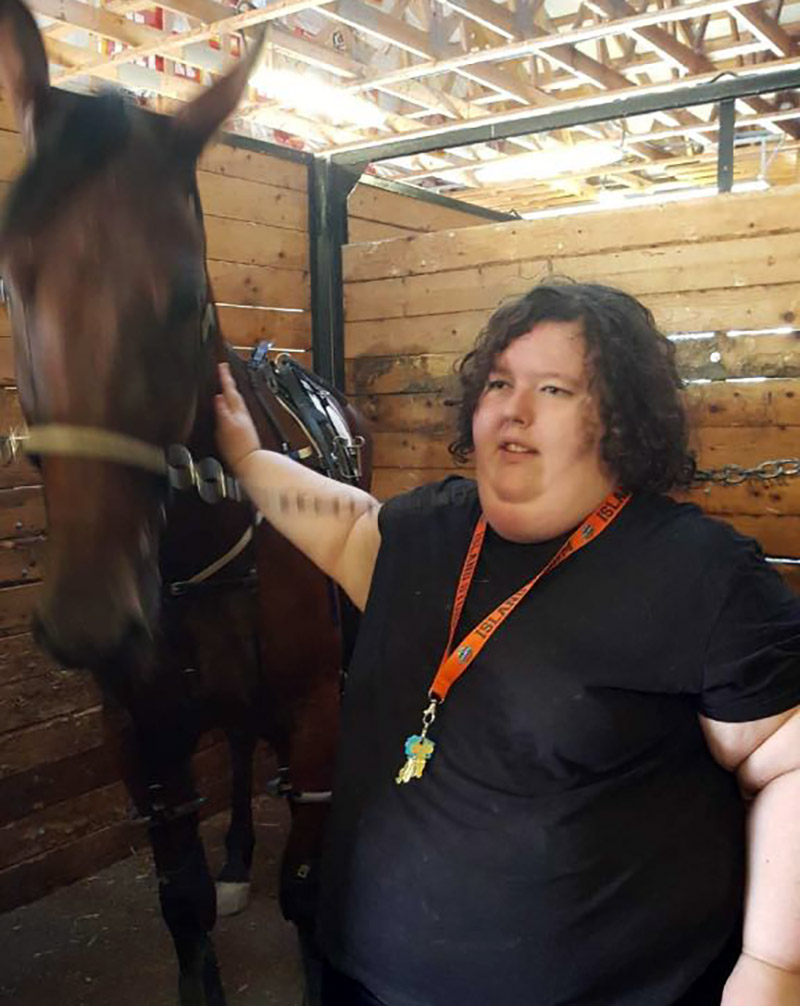 The Voice Magazine recently had the chance to chat with Cassandra Mackay from Summerside, Prince Edward Island, the traditional and unceded territory of the Abegweit Mi’kmaq First Nation.

Cassandra is currently in her second semester of the four-year Bachelor of Arts in Psychology program, hoping to become a Special Education teacher in the future.

When she is not studying, Cassandra enjoys “browsing the Internet,” and she “also like[s] going for drives.”  Although she does not have any pets, she likes to spend time with dogs and enjoys going “to the local farm and spend[ing] time with the horses.”

Although she has lived in PEI for most of her life, she was born while her “mom was on vacation in Ontario.”  Although her mother thought she would be able to make it home to PEI in time, bad weather kept her away.”  Cassandra and her mother returned when she was six months old, stating that she has “been here ever since.”

Cassandra mentioned her high school principal as the person who has had the most effect on her desire to learn.  She stated, “I had always wanted to follow my education to become a teacher, but I was almost about ready to give up on that because I wasn’t doing good academically.”  The principal told her that “there’s no one right way to become a teacher.  It doesn’t matter what your grades are now, there’s always upgrading.”  She told her, “’Find your love of learning and that’s all you need to carry yourself through the journey,’ and that’s kind of what I’ve done.”

Cassandra likes the flexibility of online education, stating, “I can do the courses whenever I want because I have a lot of medical issues.  I was in the hospital for a whole month last year.  And even when I’m not in the hospital with my various medical issues, it’s hard to do more than half-hour or forty-five minutes here and there.”  Since the COVID-19 pandemic, she has found it a bit difficult to arrange alternative forms of examinations.  When asked if she ever wavered about continuing her schooling, she admitted, “I honestly have been thinking a lot about that recently with the tuition going up again in September.”

Her most memorable course so far has been ENGL 255: Introductory Composition, mainly “because of the tutor that [she] had for that class.”  She explained, “I find I’ve had nothing but good tutors, but there were two tutors last semester, one of them being in English 255, who went way above and beyond.  Because due to my disability, I have a lot of extra anxiety.”  She continued, “Sometimes it takes me a bit longer to understand the material, and I need to talk it out with someone as opposed to just reading it by myself.  “

In general, Cassandra finds communication with her tutors average, stating, “I had some good ones and some bad ones.”  She explained, “Last semester I had one who was never able to answer my questions.  There were always miscommunications; they didn’t understand what I was asking; I didn’t understand the way they would explain it.  Then I had two others who just took six weeks to reply to each email, which caused a lot of delays on my end.”

If she were the new president of AU, she would work on lowering tuition.”  She explained, I understand it’s low in comparison to other colleges and universities across the country, but I feel like if a lot of people just put their minds together, they’d be able to find a way to lower the cost and still function.”

As for a famous person, past or present, that she would like to have lunch with and why, Cassandra chose Michael Jackson.  She stated, “I grew up listening to his music, and I always just wanted to understand more about the person behind those songs.  I’d love to have had the chance to sit down and talk over his music with him, find out where he got his inspiration from the songs, and the story behind them.”  As for the lunch, it would be “something casual,” like “a backyard barbeque because if we went out to a restaurant, we probably wouldn’t get time to actually talk,” because of his fame.

The one thing that distinguishes Cassandra from other people is that she has Asperger’s syndrome, stating that many people do not realize that she is “on the Autism Spectrum.” Her mother taught her the most valuable lesson that she has learned in life, namely to simply focus on herself “and not to be concerned with other people judging me even without getting to know me.”  She explained, “I used to get judged a lot for my disabilities and it would really get me down.  My mom would say, ‘Their opinion doesn’t really affect what’s going to be the outcome of your life.’”

Her proudest moment has been getting her “MATH 215 [: Introduction to Statistics] credit last semester.”  She stated, “I have always been a really bad math student.  I did not even take grade 12 math and I got, I think, a 57% in grade 11 math.   And then I started off the math course [thinking], ‘Can I really get high marks?’  Then around my mid-term, I started dropping to the 50s and the 60s, and I was concerned I wasn’t going to get my credit.   And then somehow I managed to pull it off.  “

In between her busy study schedule, Cassandra tries to find time to relax by watching “different channels on YouTube.”  She stated, “I’m interested in those people who just travel around the world constantly for fun, and I follow quite a few of them on YouTube.”  She also watches MTV shows like Teen Mom, as well as “the Chicago series; Chicago Med, Fire, and PD.”

Cassandra also mentioned that she likes the community created by AUSU, especially the newsletter and “the [AUSUnights] trivia nights once a month.”  She feels that “it’s enhanced my experience at AU quite a bit” and “it’s helped me connect a lot with other AU students.”  (Full disclosure: This reporter is AUSU’s VPEX.)  Best of luck Cassandra!