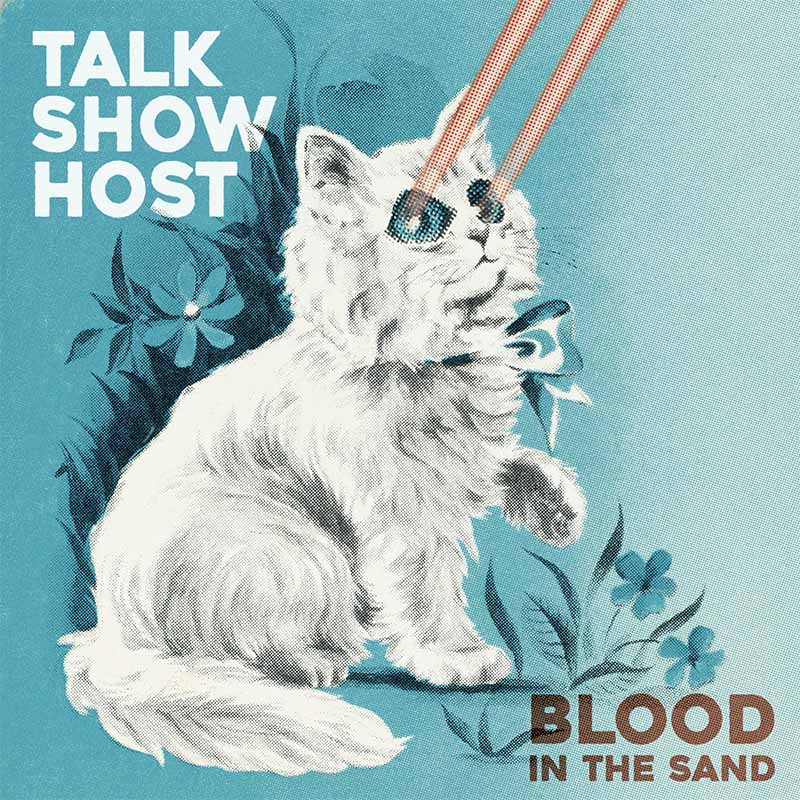 Toronto power-pop punk trio Talk Show Host has released a new single “Blood in the Sand”, now streaming everywhere, along with a new music video.  The single is one of the tracks on Talk Show Host’s upcoming album, Mid-Century Modern.  The band’s first full length album will be available June 4, 2021 on Wiretap Records in North America, and Disconnect/Disconnect in the UK and Europe.  With over 100 shows under their belt locally and in sojourns overseas in places like France, Belgium, Italy and Germany, as well as opening slots for bands like Planes Mistaken For Stars and Pet Symmetry, Talk Show Host are ready for their moment.

“Blood in the Sand” is a catchy, anthemic combination of pop and 90s punk.  I’m thinking Blink-182 meets Marianas Trench.  The up-beat tune and lyrics, “It all went wrong, I wash my hands and sing along” creates a feel-good vibe, like the song is telling us everything is going to be okay.  “Blood in the Sand” makes me think of a song that would be played in any of my favourite 90s movies during a road-trip scene.  I was ready to obnoxiously sing along before I even knew the words.

Lead singer and guitarist Chris Veinot says of the single, “It started life as a surf-inspired track but we couldn’t resist the ever-present urge to turn it into a power-pop singalong.  The lyrics recount the plot of a non-existent delinquent teen movie I dreamed about during a full moon, something from the mid-to-late 60s that could’ve been directed by Al Adamson or Ray Dennis Steckler.  The title doesn’t sound like what the song sounds like, but it was the name of the picture in the dream.  We might have destroyed the fabric of space & time if we’d changed it, y’know?”

The quirkiness radiating from this quote translates to the band’s new music video—which is just the right amount of silly and loveably cheesy.  The video opens with one of the band members filming their chonky cat, and explaining that due to the pandemic, the band was unable to film any “real” footage for their music video.  Instead, we get to watch three minutes and thirty-five seconds of Mila the cat being cute.  Everyone loves a good cat video.  Mixed in is a video montage of Veinot lip-syncing the chorus as well as Sean Woolven playing drums, and Fabien Rivenet on bass.  This is the type of music video I’m ready to see more of in 2021—lighthearted and fun, with a dash of social responsibility for making a point of staying socially distanced during the lockdown.