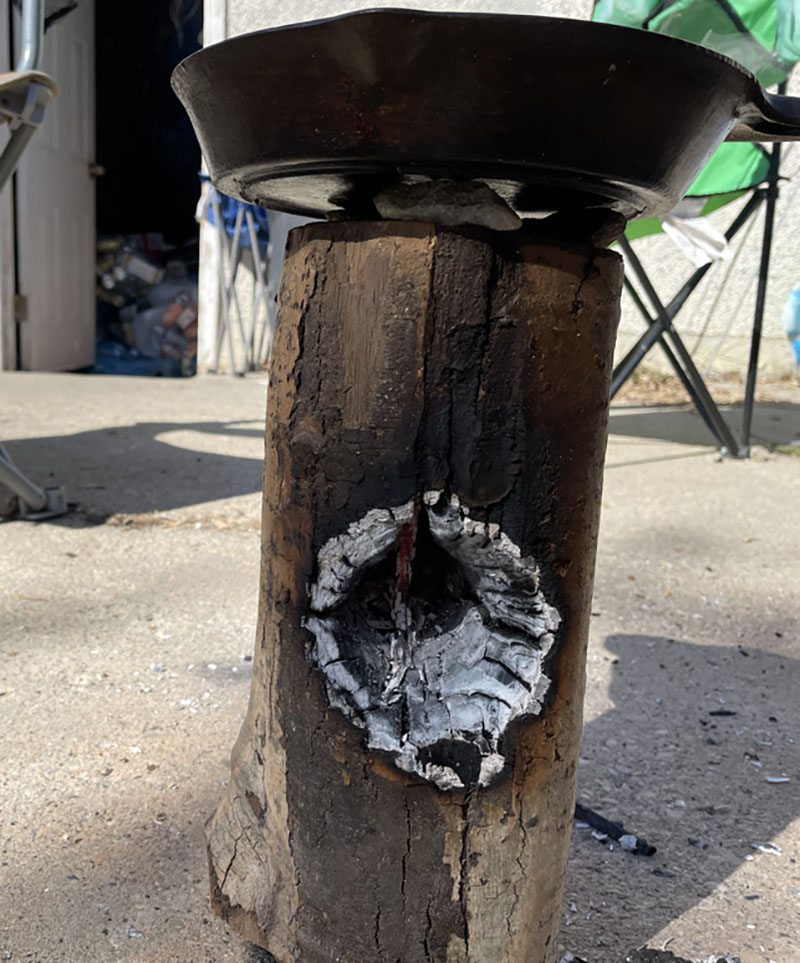 I’ve been involved in Scouting as a leader for almost seven years now.  As a kid, I was a Beaver then a Cub Scout.  In the time that I’ve been in the leadership role, I have learned so much about survival skills.  More recently, I’ve been watching a few guys on YouTube who make videos about survival.  I have learned so much just watching what some people do, but something I’ve wanted to try is called a Rocket Stove!

A rocket stove is a super simple creation.  You can buy them made of metal, or if you are a backpacker, you might have a lightweight version of a camp stove. But this week, I made a Rocket Stove myself.  This particular version worked ok, but I found I had to feed it a bit so the flame would work.  I’ve done three now, and I keep getting a little better with each iteration.  You learn a little more about what you’re doing and what works well.  I think I used wood from a poplar tree—my tree identification needs work. If your log is long, then you may want to look at getting extensions for your drill.  And if you were to do this in the forest, I’d recommend a battery-powered drill.  It’s not going to add a ton more weight, though you could go with something manual as well.

I drilled a 1-inch hole in the top using a 1-inch spade bit.  In case you don’t know, it’s the drill bit that looks like it has two wings on the side of it and a point.  Another way of drilling the hole is to use a 1 to 2-inch wood auger bit, but most of the videos I looked up showed the spade drill bit.  So, you drill a hole into the top of your log and once you’ve drilled that, you’ll need to measure how deep the hole is and line up your drill bit on the outside so that the hole you drill in the side meets up at the bottom of the hole you drilled from the top..

Once your log has these two holes meeting, you’re ready to start.  I recommend using a Firestarter for the initial lighting, and you can buy them from a camping store, hardware store, amazon, or make them at home.  But once you have some, you’ll put the Firestarter into the side hole and light it.  Then you’ll need a thin, dry piece of wood to put into the top hole to get the fire.  By the way, the bigger your holes are, the easier it is to get going.  It took me some time for mine to work, and I’m still working on perfecting it.

Once you have a flame coming out of the top, get three flat rocks and place them on top.  You could also add crew or nails before lighting it if you’re doing this at home in a fire pit or on a concrete patio.  Get out a cast iron pan or pot or a camping pan or pot and put your food into it.  I was making hamburger for pizzas, so I seasoned my beef with a couple of teaspoons of salt and let it cook.  In the future, I’m going to get an extension, but I might also get an auger for camping.