Columns
The Voice
Fly on the Wall—Less Hokey-Pokey, More Hocquenghem!

“There is no subdivision of desire into homosexuality and heterosexuality”, claimed queer theorist Guy Hocquenghem (49).  By this view, gayness does not represent a repressed minority within the hegemonic pantheon of tough men with trucks and despicable “no fat chicks” bumper stickers because, ironically, desire itself is queer.  Everything else is, well, just an old ball and chain.  (Has anyone in Alberta seen a stainless steel vulva hanging form the back of a monster truck the way some men have stainless steel testicle decorations on their rig? I’ve yet to hear of one, although my rainbow comrades out there all seem to dig the idea!)

Being accepted by the broader society is a triumph not only for every stripe of gay people but for the broader queering of life itself; that is, queer as a verb connoting identity and desire itself.  After all, there’s more to life than being normal, and every flourishing curtsy that upends stereotypical behaviour is part and parcel of a revolution toward straitjackets of tradition.

Hocquenghem’s writing suggests that identity is inseparable from consumerism in that we are each expected to constantly reinvent ourselves just enough to continue buying goods and services, while maintaining in the background a mythical unified self, like a unicorn, that imparts an overarching egoistic identity.  “Capitalist society manufactures homosexuals just as it produces proletarians, constantly defining its own limits: homosexuality is a manufactured product of the normal world” (50).  Homophobia is the problem of the dominant culture; “nobody will ever eliminate the polyvocality of desire” no matter how accepted identities are, oppression will always seek to limit their expanses to that which receives the blessing of normality (51).  There’s a reason that TD Bank is the top sponsor at Kelowna’ Pride Festival; like all gatherings in our society, the implied core meaning of being is crass commerce as well as cultural communion.  Thus, “homosexuality exists and does not exist, at one and the same time: indeed, its very mode of existence questions again and again the certainty of existence”  (53).

Pride Club Remembrances: What Does it Mean to Belong?

During my years in the Okanagan College Pride Club, which we gleefully founded in 2008 as part a protest against Stepford Wife adulthood so implicit in our Valley’s regime of normality, it became clear that, besides overt reasons of community that folks of assorted rainbow tendencies and proclivities naturally felt as they desired a safe space to abide, there were also deeper questions about the meaning of identity in general.  Core among our discursive debates in the Club were questions of queerness and essence.  What does it mean to belong and to challenge authority?  Certainly, some gay people are born that way while the lives of others embody a conscious choice and still others arrive at their identity by good old fashioned falling in love.

Questions of normality depend upon who you ask.  As the crucial 90’s queercore band Team Dresch said, there’s more to being queer and having pride than simply being allowed to get married and go shopping.  Both of those are nice rights but there’s more at stake in terms of cultural change.  From on stage a quarter century ago, Team Dresch stated that “sexual freedom is what we sing about a lot because it’s something that we need…it’s not like we want to grow up and be lesbians, like all the straight people, and have houses in the suburbs and get married … I think marriage should be disbanded, fuck marriage!  I think marriage should just be this family … I don’t like mainstream gay culture commodifying our sexuality.  It makes it more difficult for everyone .. .just shut the fuck up and let’s have a little sex!”

The Big Fall And What Actually Matters

Living in the Fall of civilization, as it seems to some—complete with hyperbole and conspiracy theorists each allowing adherents to acquire, consumer-style, a sense of belonging within the monolithic void of our culture; with ever cheaper junk from China; ever-pricier cookie cutter education exerting an ever-tighter vice on our pocketbooks; and with evermore obsessive concerns about the economic outcome from our education—Kelowna’s pride seems a beacon of hope this autumn.

We at AU are, after all, not only back in school to better our life chances, our careers, and even our marriage prospects, but also to acquire deeper and more subliminal habits and virtues to add to the being of our identity.  We become distance students that we may more fully and truly embody who we are.  In a small way our cloistered realm of individualized education parallels the way that Pride has flourished this century as a sanctioned public event; where people of what was once known as alternate lifestyles can, with joy and love in their hearts, happily flaunt their perceived essence.

We do have to believe in ourselves to succeed at whatever matters most in our lives.  So let’s be proud that, in our Canada, we can increasingly be whomever we are—or choose to be, and specifically remember to say with pride that we are AU students.  There’s no AU Auroras (not a bad sports team name, right?) to cheer for and maybe that’s because we have to be our own best ambassadors, cheerleaders, and champions of our academic virtues.  With simultaneous pride and humility, of course.

The Spectrum is All of Us!

There are no colours left out of nature’s spectrum and there is no rainbow that does not involve the sunlight that sustains us all.  As Jean-Paul Sartre put it when examining psychiatric treatment of homosexuals, “the homosexual must remain an object, a flower, an insect, a dweller of ancient Sodom or the planet Uranus, an automaton that hops about in the limelight, anything you like except my fellow man, except my image, except myself.  For a choice must be made: if every man is all of man, this black sheep must only be a pebble or must be me” (Sartre in Hocquenghem, 52).

One is reminded of Nirvana’s 1993 cover of the Terry Jacks song “Seasons in the Sun” in which the protagonist laments a lost friend who was “the black sheep of the family”.   Perhaps we must allow our inner black sheep, our inner difference from others, to flourish if at AU we are to fully embrace our scholarly identities, distant from normal universities though they be.  After all, we are all learners in the school of life (and hard knocks) and in that same way, as we appreciate Pride as part of a new emerging Canadiana, we are all at some level as unique, weird, and queer as the day is long! 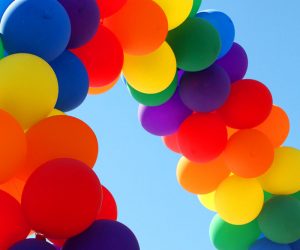 Fly on the Wall—Pride in the Fall

Fly on the Wall—Waiter, there’s a Phallus in my Soup