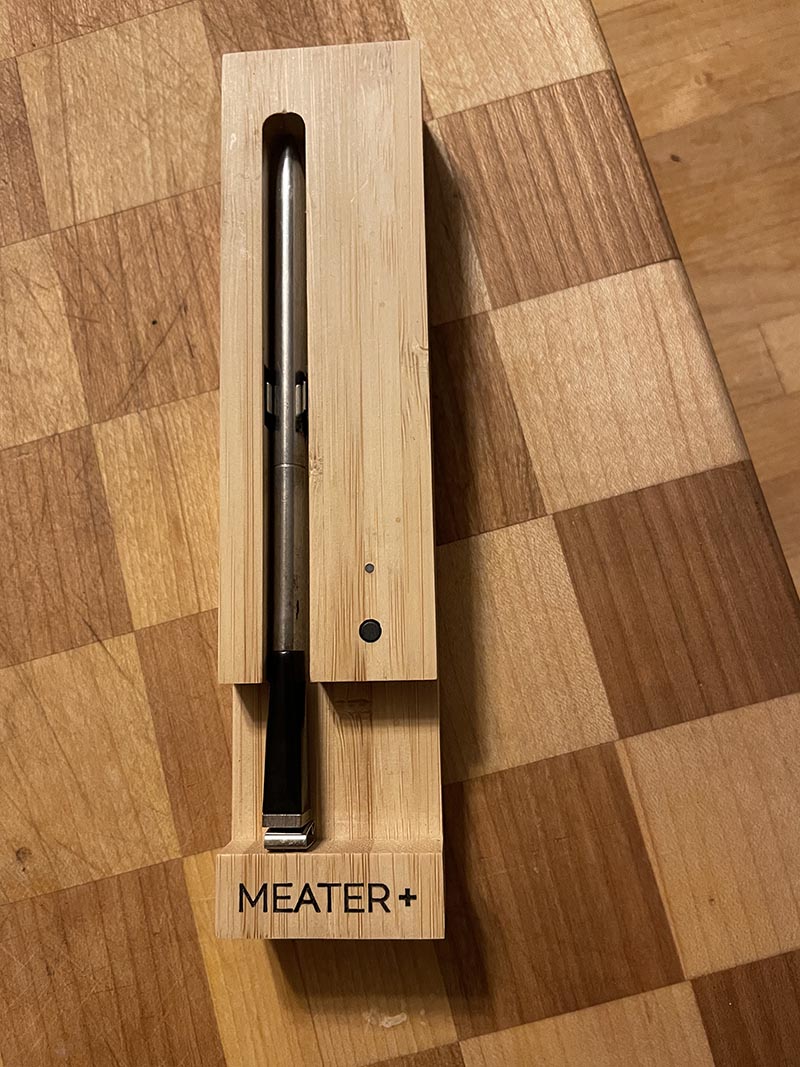 This past Christmas, my parents bought me a nifty little device that my dad had been using for a while.  I thought it was a neat investment, not that it was overly expensive, but I use it quite often, so I thought it would be worth writing an article to discuss it.  Not so to sell more of these devices, but rather as an honest review.  There are times I am frustrated with it, but other times it’s great. 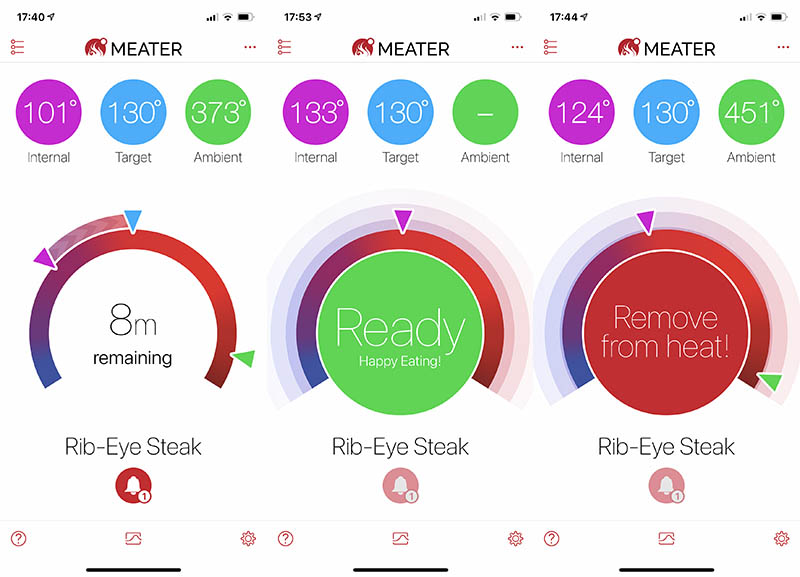 You get a probe and the recharging box, which also acts as a wifi extender in the two latter models.  With just the probe, you must stay within ten meters of the unit; however, with the plus and block, the probe station allows you to extend the range of the device from 10 meters to 50 meters; you can extend that longer by using two devices.  I can hook up my iPad to the probe and then look in on it anywhere I get a cellular connection as long as my iPad or the probe don’t lose signal or power.  I used this feature recently when I smoked brisket for my sister-in-law’s birthday.

The smoker has its own probe so I used that and also used the Meater+ to see differences in how each device measured.  It was very close, and while the brisket turned out perfectly, the Meater probe was slightly behind.  So, it seems there are differences in some digital probes.

For a test today, I cooked four steaks, two striploins and two rib eyes.  I put my Meater probe in one of the rib eyes and then relied on my training to tell me when to pull the other steaks based on the look and feel of the meat. 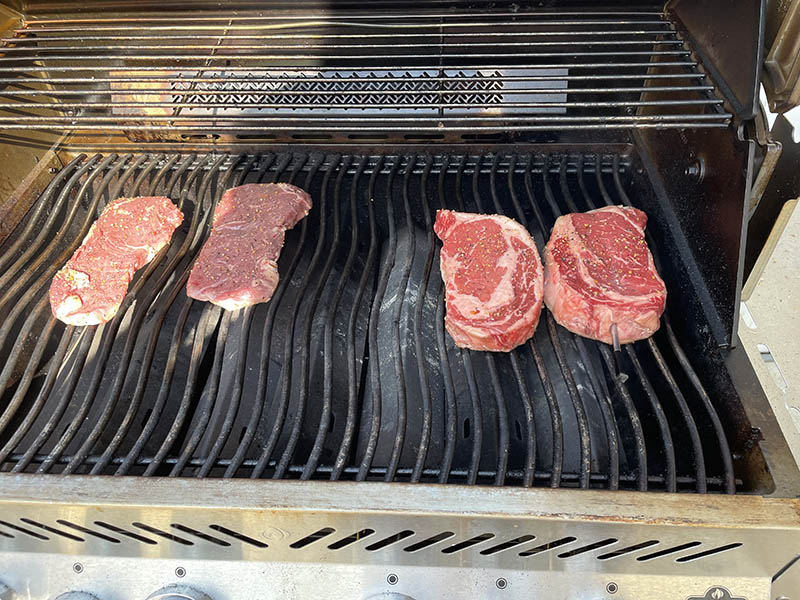 The steak on the right of each pair was the one with the thermometer, while the left was not checked for temperature.  I cooked each pair on the same side of the grill at the same temperature. 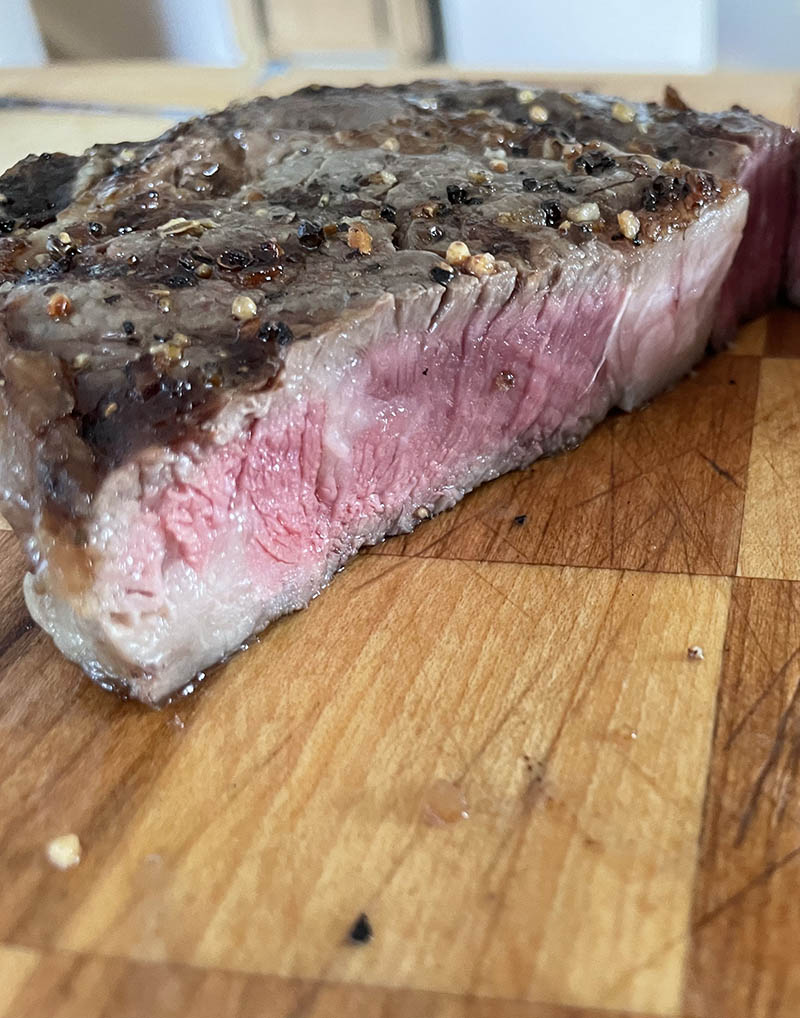 I removed the left one when the app said the steaks still had 8 minutes to go.  I let them both rest; the left steak rested longer while the right steak rested only for the time the app gave me.  The first picture is the left steak, which is slightly pinker than the right steak but not off by much.  I also ate half of each steak, and they were very close in mouthfeel and chewability.  I didn’t find myself chewing one side more than the other, nor did I find a significant difference in the texture.  I cooked the measured steak to 130F while I pulled the other steak at what I had assumed to be close to 125 or 130F.  I wasn’t looking to see how accurate the temperature was on the probe with these steaks because I knew from previous comparisons that it would be close. 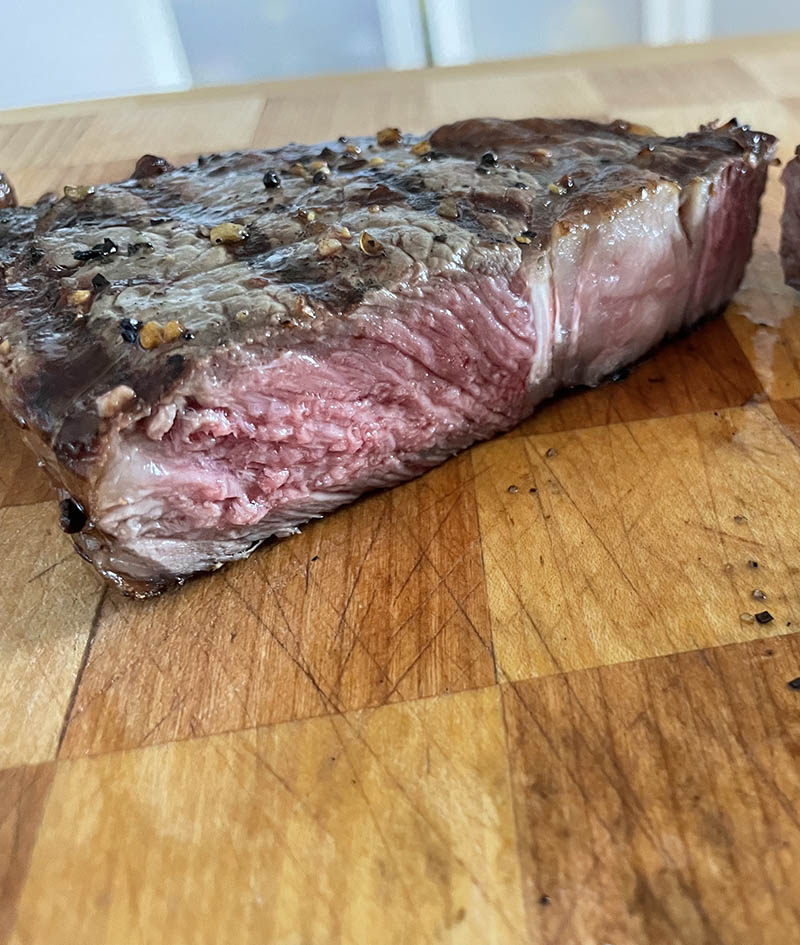 The good, the bad, and the ugly of this device.  First, if you can afford to buy a wifi thermometer, this one has a 4.5-star rating on Amazon.ca based on over 11,000 reviews.  Other review pages list it as an editor’s choice or a top pick.  The best of the couple pages I checked seems to be the Weber iGrill2 with a price of $139.99 on their Canadian website.  I also looked at Napolean’s website, and they have a Bluetooth thermometer for the same price.  The Meater+ is going to set you back more than those at $169.99 on their Canadian website.  The difference? Both Weber and Napolean have corded probes, thus making them only wireless from the base, where the Meater probe has no wires, and the base can act as an extender.  The Napoleon and Weber websites do not mention the distance that each of their devices can hold up to, so I do not have a comparison.

Bottom line.  I would repurchase this product, even though I got it as a gift.  I feel like it does a great job at the one task It is meant to do, and I’d like to push it further in the future to see how it performs under other situations, like candy making.

Fly on the Wall—The Personal Measurement of our Studies