Columns
The Voice
Homemade is Better—Beer Can Chicken 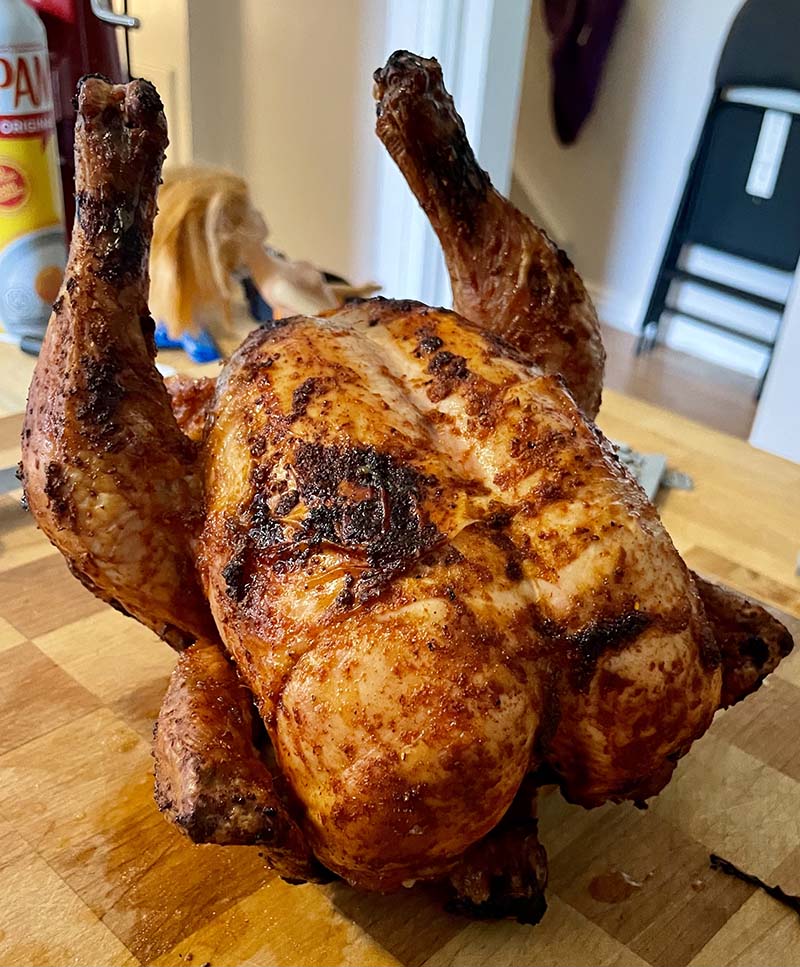 This week I chose a popular recipe that most YouTube or tv cooks will make.  It is easy and typically turns out moist and delicious.  Beer can chicken is incredibly simple, and you don’t even need to use regular beer.  I chose Coors Original, but non-alcoholic beer also works.  The idea behind this dish is that you’re steaming the inside of the bird and roasting the outside.  There is some debate about whether the beer reaches a boiling point to create steam, but I’ve never put much thought into the specific science behind it.  I just know that I love it! 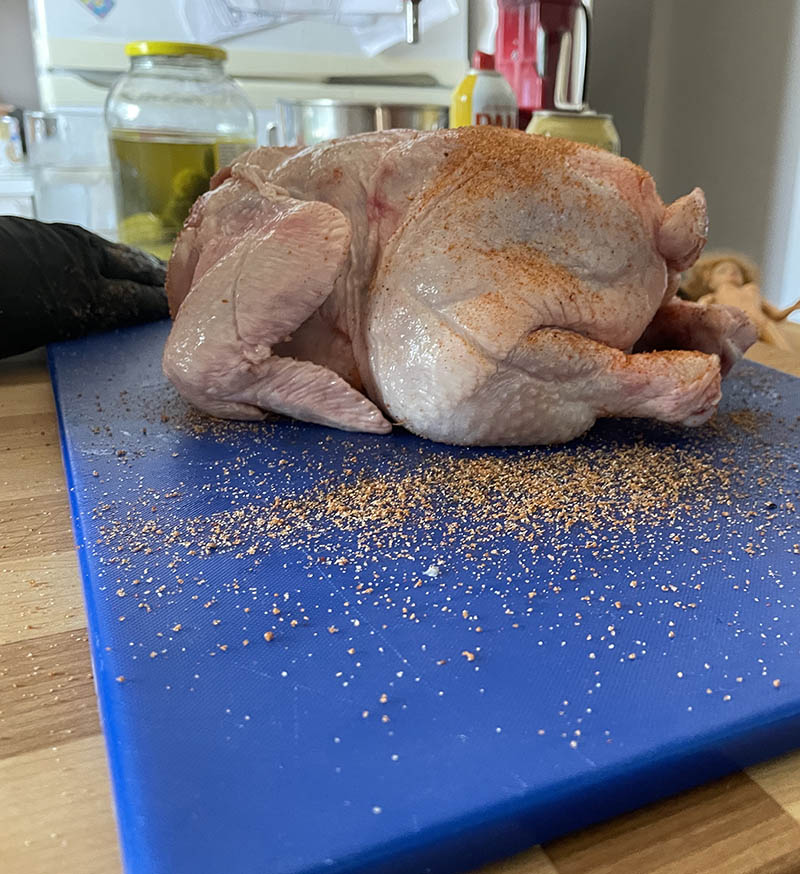 But if we dig into the science slightly; it might be interesting to consider the possibility that the beer does boil.  If we consider that water boils at 100°C or 212°F at 1 atmosphere or 14.7psi, it takes approx. 3-4 minutes to boil 1 litre of water.  Pure grain alcohol boils at a lower temperature of 78.37°C or 173.1°F at 14.7psi.  Edmonton, where I live, is at approximately 14.79psi, so slightly higher than sea level, around 668m above sea level.  Water in Edmonton boils at 97.8°C or 203°F, which means that pure grain alcohol would boil at a lower temperature as well.  For simplicity, let’s suggest that beer would boil at a slightly lower temperature than water and if we lower the temperature by the same reduction for water, +/- 2.2°C, we get 76.17°C.  Average out those two numbers, and we get 86.985°C.  So, with this information, we can say that it might take a similar amount of time for our beer to boil. Let’s say it will boil at 4 minutes.  We also need to consider the vessel in which the beer is contained.  Aluminum has a high conductivity of heat, so it is plausible that beer would boil at a temperature above its boiling point; at the very least, enough energy is transferred, so it gets to a point where it starts to steam.  I heated my grill to around 350 – 375F, and the chicken cooked for approximately 20 minutes.  I used my trusty Meater+ thermometer to measure the temperature in the grill and the chicken.  If you don’t know what this device is, see my last article. 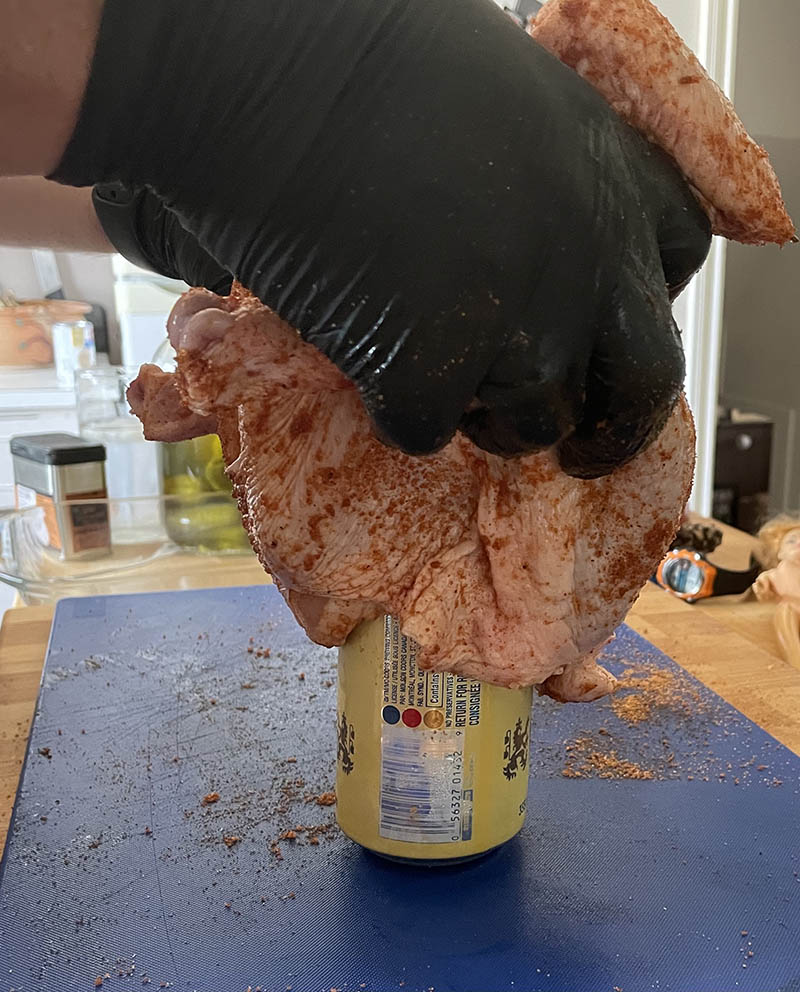 I had bought a reasonably standard chicken from my local grocery store.  It had been frozen, so I thawed it over 3 or 4 days in the fridge.  Then seasoned it with my “Big Daddy’s” Meat rub; see my article for smoked pulled pork for the recipe.  I made sure to season the chicken liberally.  The next thing you need to do is remove about 1/3 of the beer.  If you’re not a drinker, pour it down the sink; otherwise, the cook will need to consume some of it.  I always make sure I have two cans available for this recipe—one for the chicken, one for the cook.  Then you’ll need to carefully maneuver the beer can into the rear of the chicken.  The chicken should be standing up.  Cook your chicken until you reach 170°F, it took me about 20 minutes, but I always rely on temperature to make sure it’s cooked. 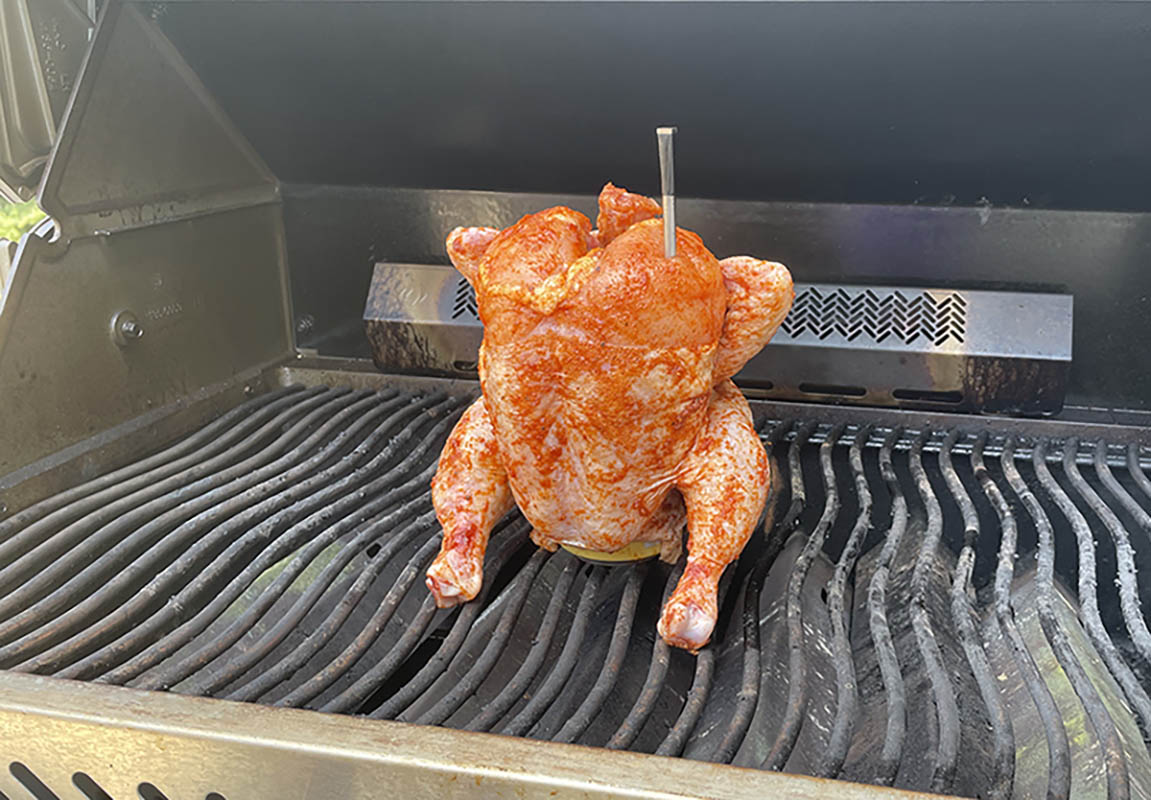