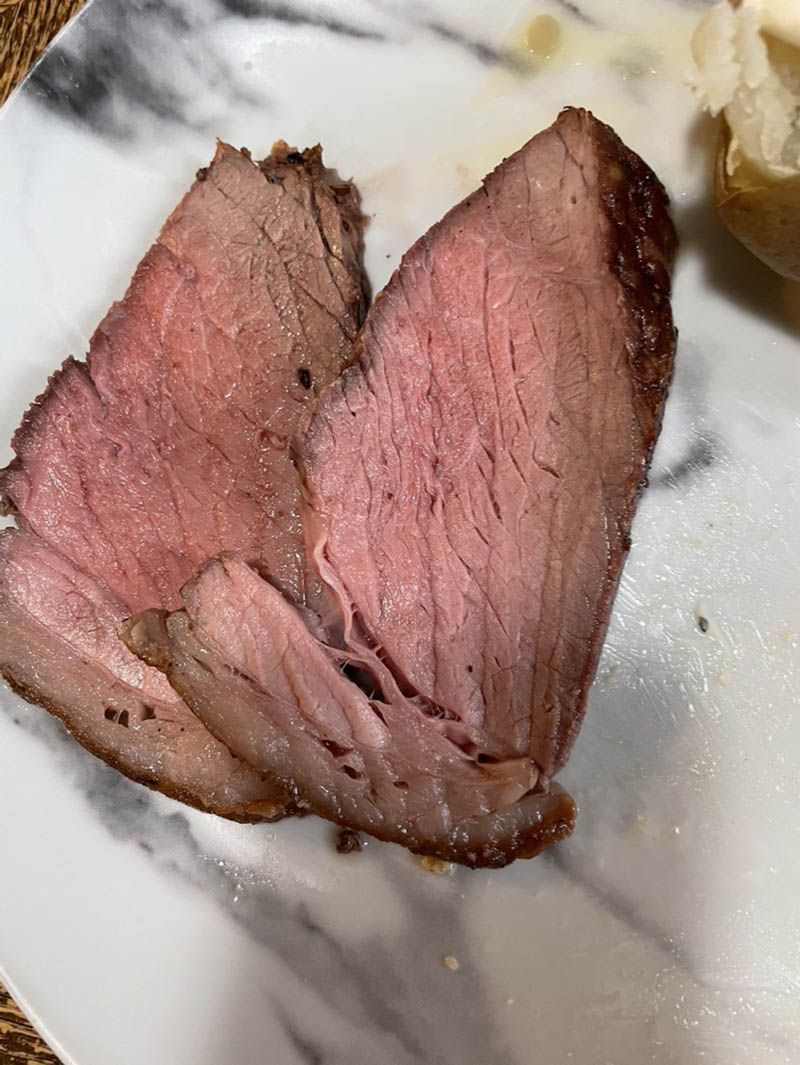 I was looking to see what articles I’ve done over the last year and realized I have yet to write about cooking roast beef.  How I could forget such a quintessential meal option is beyond me.  Nevertheless, we picked up an inside round at our local grocery store today while considering what to have for dinner.  It was hot outside today as well, so cooking inside was out of the question.  This leads to a few other options; I could smoke it, rotisserie, or use indirect heat on my grill.  Each option has its benefits and setbacks. 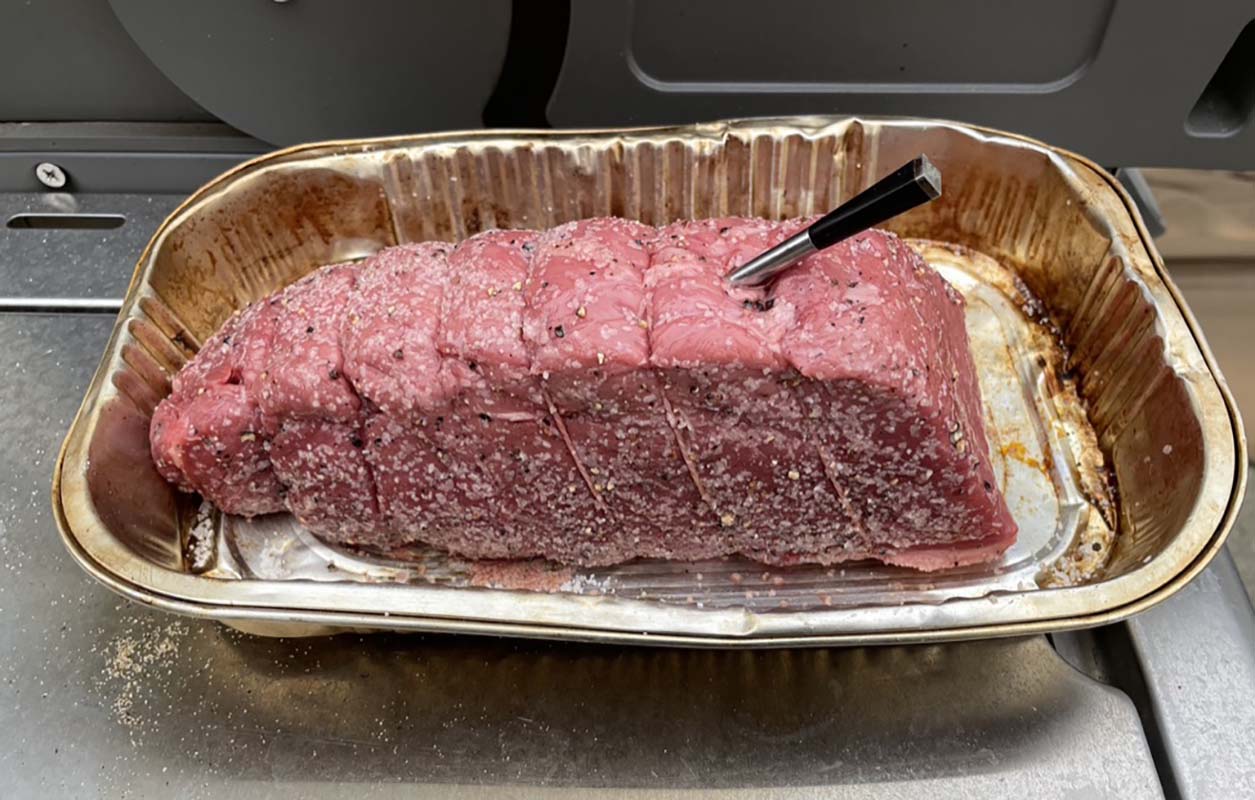 Smoking, while delicious, is best for a prolonged, low heat cook.  The smoke penetrates the meat and gives it a great taste, but not every meat is fit for smoking.  Don’t get me wrong, you can smoke just about anything edible, but that doesn’t mean you should.  Pork, poultry, turkey, fish, some cheeses, and some cuts of beef smoke great.  A rib roast, for example, is a great meat to smoke, so are brisket and beef ribs.  That multi-hour cooking at a low heat like 225F lets the smoke penetrate the meat and gives you that great smoke ring.  Fish, like salmon, is also great smoked.  Now I know what version you might be thinking of, and that’s not the version I’m talking about.  “Smoked Salmon,” as you might be thinking, is cured and then cold smoked.  This version is a smoked salmon at 225-250F for an hour, covered in dill and lemon.  Perhaps a future recipe.  I’ve written a couple of pork recipes utilizing the smoker already pulled pork and side ribs; look up those recipes if you want to make them. 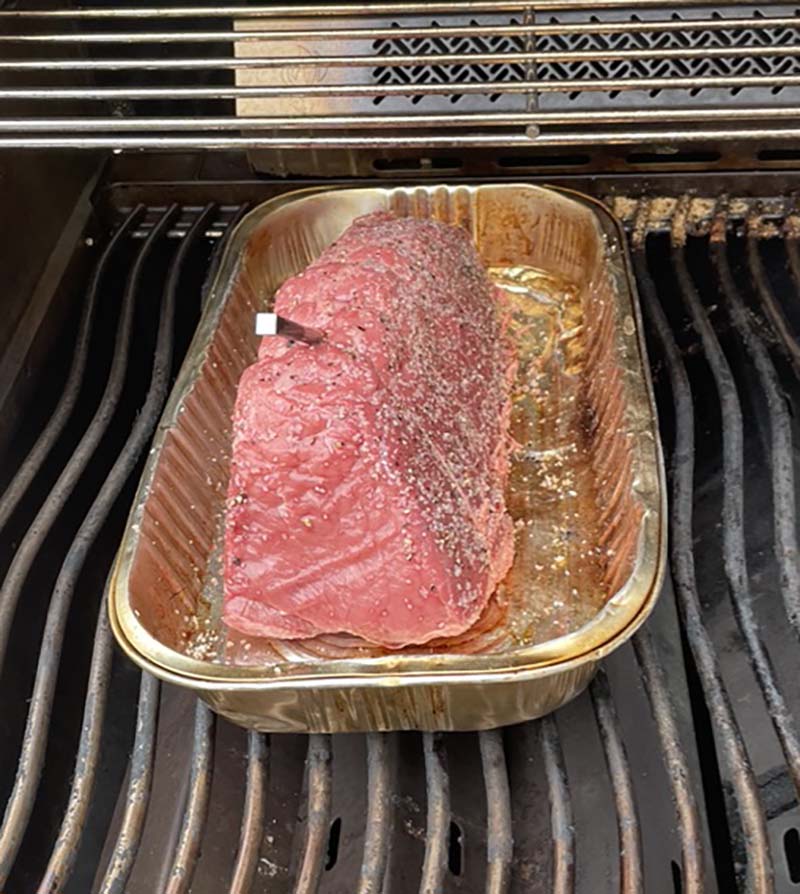 Rotisserie is another great option.  You can baste your meat better, and it will cook evenly over a shorter amount of time than with smoking.  If you don’t have a rotisserie for your grill, though, this is ruled out.  Although I suppose you could DIY one, just look it up on YouTube, and you might see loads of people who improvise their rotisserie using creeks or other means of rotation.  I used to work with someone whose partner did just that.  I was amazed when I saw the creation!  I aspire to try it one day; we’ll see what happens.

Some other foods that are great on the rotisserie include poultry.  Turkey, chicken, duck, just about any fowl will work on a rotisserie.  Duck is incredibly fatty on the outside, so you’d want a tray under it to collect the fat.  I’ve even seen a tv celebrity chef create their own donair meat and used the rotisserie to cook it.  I didn’t feel like pulling out the equipment this time, which left me with one last option: indirect heat in the grill.

Why choose, and what is indirect heat?  Indirect heat is using your grill to make a convection oven.  It is just a fancy way of saying oven.  I turned on the right two burners of my grill, and the left burners were not lit.  This heats up the cooking box, just like your oven, but gets a bit of convection heat going.  I can allow the burners to remain at high heat, and the “cold” side of the grill will bring the temperature down enough that I’m cooking at 350F.  If you do not have a great oven thermometer, get one!  They are inexpensive, and you can order them from Amazon or buy them at kitchen supply companies.  Costco even has such a location in Edmonton, as does Loblaws.  You want the cooler part of the grill to only get to 350F.  Of course, if it is not a billion degrees outside, just use your oven.

I seasoned my roast with kosher salt and pepper, placed it in an aluminum tray and put it in the cooler part of the grill.  I wrote about my fancy pants thermometer before, but I use it with almost every cook.  It is incredibly accurate; I cannot even believe how accurate it can be.  But enough of my bragging.  A good covering of salt and pepper over the meat, and rub it in.  If you have a great covering all over the roast, let it sit for about 15-20 minutes.  The salt will help the moisture, and the prolonged wait time will bring the meat closer to room temperature.  I’m sure I’ve discussed this before, but the Coles notes version is that if your meat starts at a warmer temperature, it doesn’t have to work as hard to cook.  I will sometimes allow my meat to rest before cooking for up to an hour.  It makes a difference, the meat cooks quicker, and I have found it more tender because it didn’t have to convert as much moisture into steam.  At the end of the cooking, you want to rest the meat again, this time to allow the moisture to calm down.  When we are hot, we sweat, and when we start to cool down, the sweat stops.  Similar to meat, let it rest, and it will keep some tenderness.  About a twenty-minute rest is perfect for this roast.  Then slice it into thinner slices and enjoy! 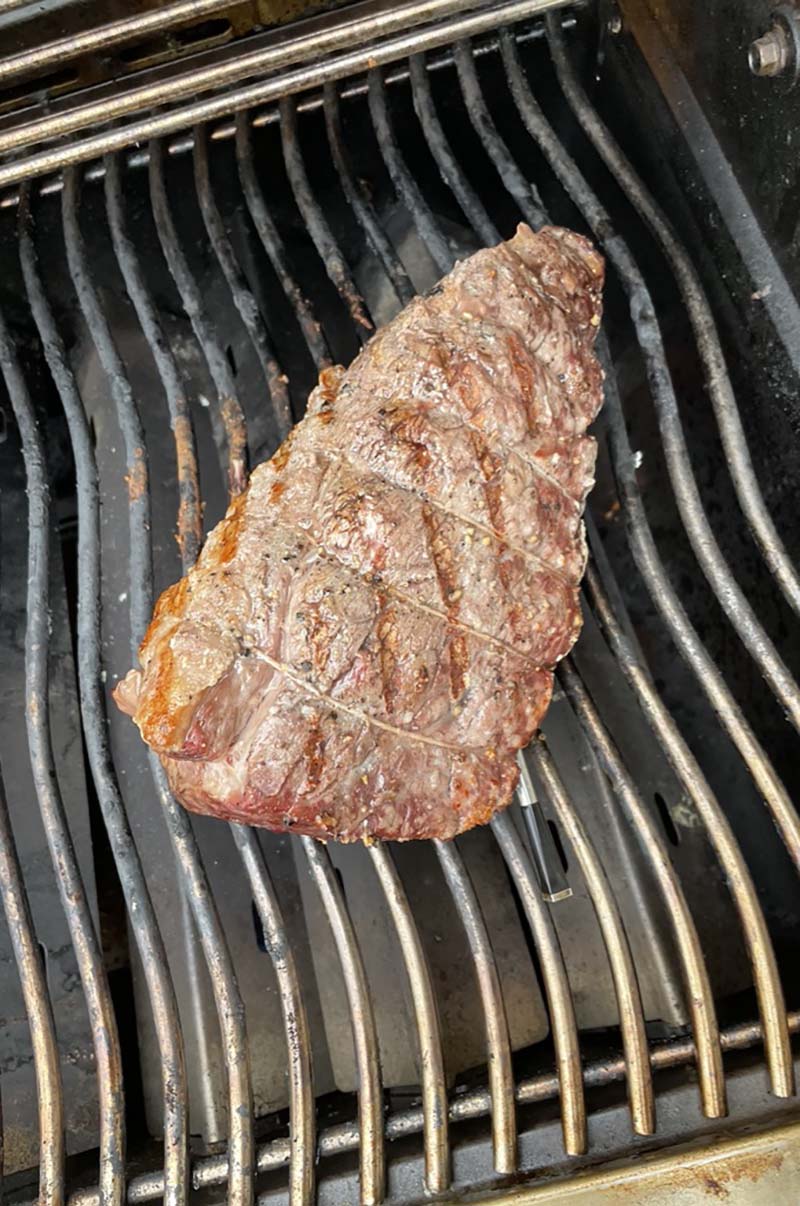 1 inside, outside, or eye of round roast about 3–7 Lbs
2 tablespoons of kosher salt
2 Tablespoons of ground black pepper

Bison: the other red meat? Worth a Second Look