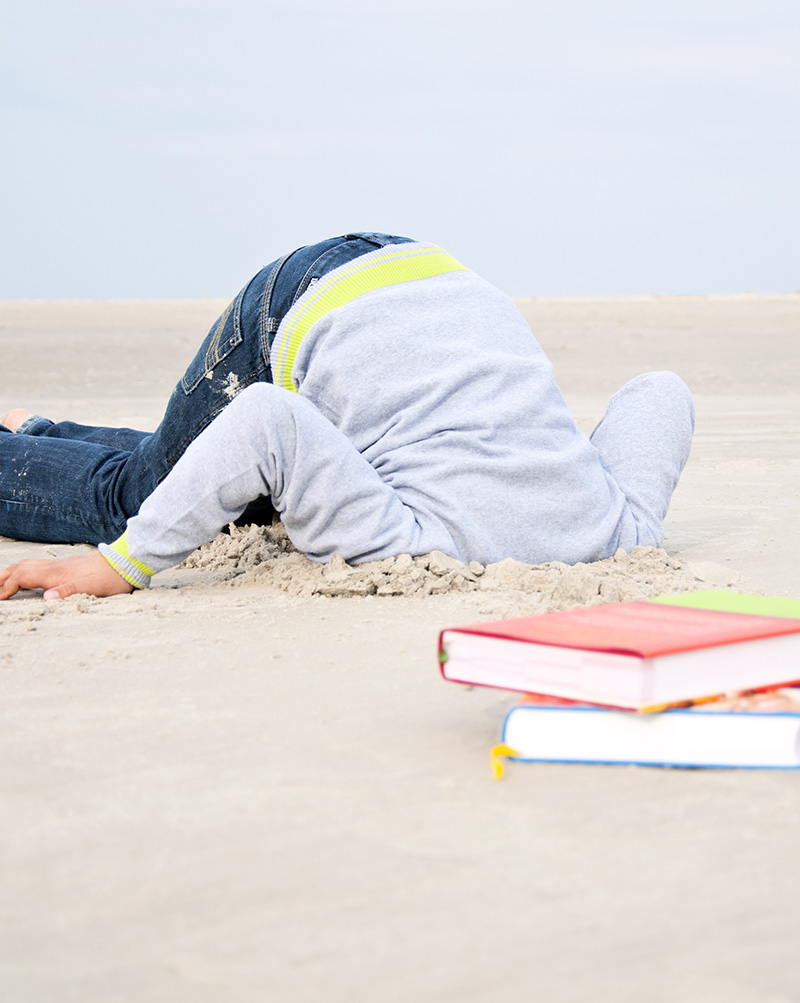 Overstrained child stuck his head in the sand because of too much homework. Some books are lying in front of him. View from the front. grey sky.have a look at different variations:

You’ve been assigned your first paper, and it’s 10,000 words.  Your prof stressed that the thesis statement is critical for your success and that your paper structure needs to be sound.  And she wants you to include your outline.  But you don’t even know how to write a thesis statement.  What do you do?

Over the last three weeks, I showed you how to read a textbook, take notes, and memorize a book, but this week let’s focus on how to write your thesis statement and generate an outline.

For this recipe, you need an outline generator (provided at the end of this article), a topic to research, lots of research already underway, Microsoft Word or loose-leaf paper on which to generate your outline, and a pen if needed.  And you’ll need to activate your left-brain for some structural fun.

Please bear in mind you’ll need to have researched your essay topic in depth prior to creating a full outline.  You’ll have needed to isolate key themes, find citations, and gain a general idea for the structure.  But your structure may be rough and incomplete, which is why you’ll want to iron out a great outline at this stage.  I covered how to research an essay in a prior article.

But back to writing a thesis statement.

A thesis statement typically has one main idea supported by three key elements.  If you have a topic assigned in the form of a question, then turn that question into a thesis statement.

You then need three elements to support your view.  Theses rely on threes.  Three is a pleasant number, even in still life art, which often features three pieces of fruit or whatnot.  But you don’t have to worry about being confined with just three topics with which to write a 10,000 word essay.  You can always make your three elements very broad and than then break each element up into sub-elements.

A great strategy I learned for creating a complicated outline for a thesis statement involved making the three elements very general, but then breaking each element down into complex outline structures.

The structure for your outlines for each of your thesis statements need not be parallel.  For instance, you could have each of your three elements broken down as follows:

The Idea behind showing you the above outline is to demonstrate that outline structures need not be parallel nor just a long paragraph per element.

But you do want parallelism with how you introduce each element or each sub-element and so forth.  The parallelism will ask as a guidepost for your reader.

For instance, say you have three elements, the first and third ones containing multiple sub-elements, and, in the third one, even sub-sub-elements.  What do you do?

You could say, for the first element which has three sub-elements: “The metaphysical substance called unconditional love is largely ignored in academia, and needs to be addressed to achieve three things: (1) minimize the role of emotions, (2) prioritize love over mind as the essence of the being, and (3) provide a framework for selflessness.” (This sounds like a thesis statement, doesn’t it?  In a way, it is, it’s like a mini-thesis statement.)

For the second element, which has no sub-elements, you could say, “The metaphysical substance called unconditional love is undergoing a revival in the realm of marriage counseling, although this movement is external to academia.” And then provide your supporting evidence of course.

The purpose of the above description is to help you see how to create parallel introductions for each element (I.e., they all start with “The metaphysical substance called unconditional love”).  Typically, you want to vary the introductions somewhat, but since this outline structure is more complex, I chose to introduce each element with similar wording.  The purpose of the above description is also to help you create a mini thesis statement for each element or sub-element or sub-sub-element, where applicable.  The purpose is to also show you how to create complex outline structures.

Also, it should be noted that you don’t need just three elements in your thesis statement.  You can also have four, five, even two, or some other number greater than one.  Just remember that three is the most pleasing, so strive for three whenever you can.  And avoid two if possible, as it makes for an impression of a weaker argument.

Lastly, there is a thesis generator that also generates an outline.  It can be accessed at writingcenter.uagc.edu/thesis-generator.  While the outline generator is fairly basic, it does give insight on how to structure a paper based on an outline.

So, there you have a recipe for generating thesis statements and their outlines.  It gets easier to generate outlines the more you do it.  And should you ever need to hand in your outline, you’ll have a surefire high grade.

This all may seem basic for our more seasoned academics, but when I first realized the above during a communications studies lecture, it was revelatory to me.  Recipes can be repeated and refined, but the best are shared.

The Study Dude—Small Wins Add Up

The Study Dude—Ten Steps to an A-Grade Persuasive Essay

The Study Dude – Writing a Dissertation in a Snap, Part II