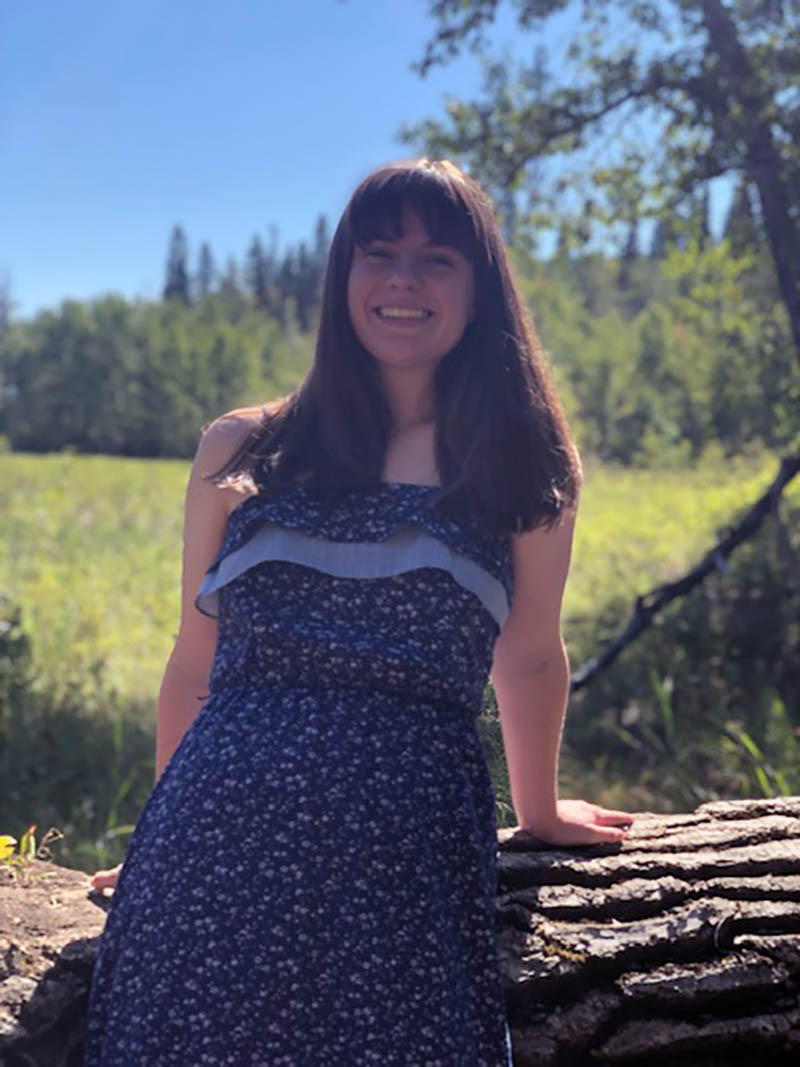 The Voice Magazine recently had a chance to chat with Hanna Habke (she/her), currently residing in Calgary, Alberta, the traditional Treaty 7 territory of the Blackfoot Confederacy (the Siksika, Piikani, and Kainai First Nations), the Tsuut’ina First Nation, the Îyâxe Nakoda First Nation (the Chiniki, Bearspaw, and Wesley First Nations), as well as the Métis Nation of Alberta (Region 3).

Twenty-year old Hanna Habke is currently in her second year of the Bachelor of Commerce degree here at AU.  She stated, “I decided to take this program because the skills that I have learned from it apply to what I want to do when I finish school.  My ultimate dream is to run a wellness retreat in the mountains where any one from any background can get away and get the help they need.  I have struggled a lot with mental illness and would like to create a safe space for people to come and heal.  The retreat would have accommodations such as yoga, personal training, therapy, meditation, and more.  This is a big dream, but I am taking things one step at a time, I ultimately just want to make a difference and help people.”

Hanna told The Voice that she has been living in Calgary for her whole life.  A Girl Guide for twelve years earlier in her life, she travelled worldwide with her troop, including a twenty-day trip to Switzerland and London, England, as well as completing several service projects.  One of these projects involved city buses that collected food bank donations from grocery stores.  She explained, “Our group unloads the buses at the bus barn and organizes the donations into boxes that are then taken to the food bank.  I believe our record is twenty-seven busses!”

Hanna also stated that she has a chronic illness called POTS (Postural Orthostatic Tachycardia Syndrome), and has been a yoga instructor for the past three years.  Hanna said, “I got my certification before I even finished high school!”  She currently teaches two classes weekly and works customer service for a local gym.  After work, you can find Hanna lighting weights at the gym and spending time with her sister Emmy.

Hanna is a self-described “full-time book worm and plant mom!”  She explained that she “love[s] to hang out at home, and dive into a new book.”  Although her favourite book changes all the time, she admitted that her “favourite series of all time is the Percy Jackson series.  My hot take is that Percy Jackson is better than Harry Potter.  That usually gets me into a lot of fights hahaha!”  Currently, she is “about to start the Nevernight trilogy by Jay Kristoff,” stating that she has “loved his writing in the past and [is] excited to start his most popular series.”  She “also collect[s] tropical plants and [has] a growing interest in botany.”   In addition to all these activities keeping her busy, she also has “a dog named Anny and two cats, Tagg and Peanut.”

When asked who had the greatest impact on her desire to learn, Hanna stated that she “could probably list about twenty different people.”  However, in terms of her current degree, she credits her uncle Peter as the one person who has made the greatest impact overall.  “He happens to be a successful businessman, and when I told him about what my dream was, he said that it could totally be double but that I would have to get my education first.  Whenever I see him, we always have long and interesting conversations about finance and I really value that.  He has always been one of my biggest cheerleaders when it comes to getting my degree.”

Hanna loves online schooling, although she admits that “it is hard sometimes to not have someone teaching you the material.”  However, she enjoys that fact that she “can do schoolwork whenever and at [her] own pace.”  She explained, “Right now, I take two courses at a time, and I find it a lot easier to complete the courses quicker and turn more of my attention to a single course, so I do not spread myself to thin.  It also allows me to pick up extra shift at work anytime I want to, so I can still get some career experience while completing my studies.”

Although she has “not had much correspondence” with her tutors, she feels that it has been a “positive experience” so far.  As for AU courses, Hanna recommends CMIS 245: Microcomputer Applications in Business (Windows), since it “teaches you how to use Microsoft applications, and I am not exaggerating when I say I use what I have learned from this course everyday multiple times a day.  “

When asked if she ever wavered on continuing her studies, Hanna admitted that although she has “wanted to avoid this conversation,” the pandemic has made things difficult.  She explained, “Because I work in the fitness industry, I have been laid off six times during the pandemic.  That, on top of all the changing restrictions, it has made it very difficult to plan out what courses I will be taking and when.  I stated school in the middle of the pandemic.”  She continued, “I was supposed to travel to Bali, Indonesia for a yoga retreat in March of 2020, but I never ended up going because of the pandemic.  I was lucky enough to get most of my money back, and by the time summer of 2020 the pandemic was still occurring, so I decided to invest that money into school.  I went back and forth for a while on whether to start school because my original plan was to take a gap year or two to travel.  But like everyone else, COVID through a wrench through my plans, but I would not have it any other way because I am happy with where my life is at right now.  “

If Hanna were the new President of AU, her first “plan of action would be to make AU as affordable for people as possible.”  She explained, “Every year tuition and course fees go up, in part due to recent provincial government policies and lack of funding for post-secondary schools.  More and more students are leaving Alberta to go to school out-of-province.  Education is very important as it decreases crime and increases the standard of living for communities and individuals and everyone should have access to it.”

When asked which celebrity —past, present, or future —she would like to have lunch with and why, Hanna chose engineer and television presenter Bill Nye [The Science Guy!] or entrepreneur and social media vlogger Hank Green.  She stated, “I just feel like we would have a great conversation and I would learn so many new things!”  And the lunch would definitely be “a veggie burger or spicy chicken stir fry.”  She explained, “I’m almost a vegetarian.  I still eat chicken but no other meat than that so those are my go to meals.”

Something that people do not know about Hanna is that she still has her baby blanket from childhood, which she considered “a comfort item.”

As for her proudest moment?  Hanna states that it was when she “reached out for help.”  She explained, “As I have mentioned I struggle a lot with my mental and physical health.  I was diagnosed with anxiety and depression when I was in my tween years.  It has taken therapy, meds, and a lot of self-work to get to where I am today.  I am proud of myself everyday for not giving up on myself.”  And her most valuable lesson?  “Your wellbeing and happiness come first, always.” Best of luck Hanna!