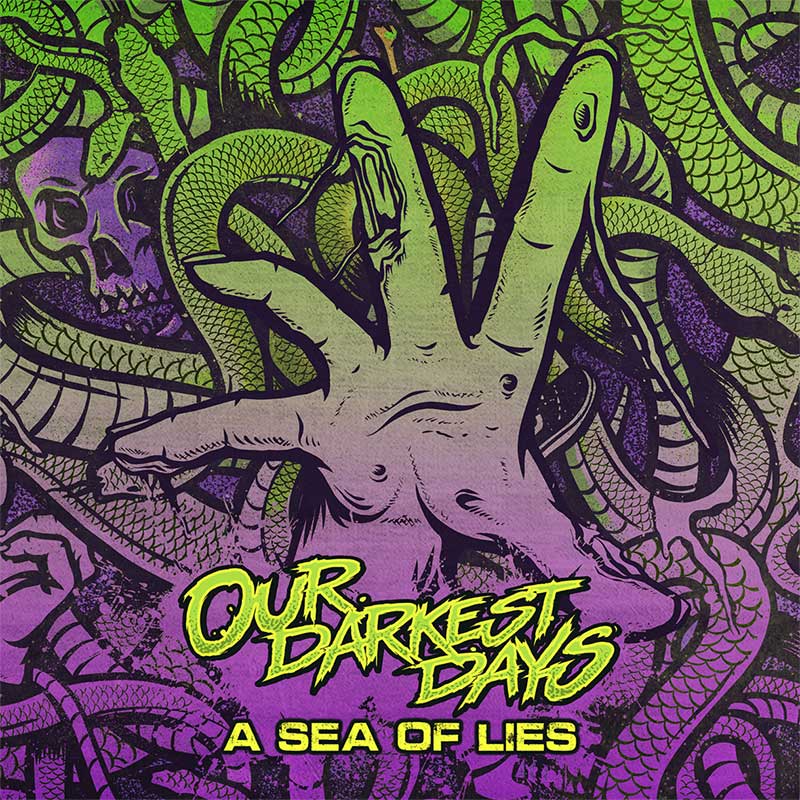 Canadian melodic/skate-punk band, Our Darkest Days, is releasing a new album entitled Snakes and Ladders.  The album will be available digitally and on CD November 19th 2021, with vinyl shipping in early 2022.  In the meantime, the band has released a single from Snakes and Ladders entitled “A Sea of Lies”, available to stream anywhere you get your music.

Hailing from Quebec City, Our Darkest Days was formed in 2012.  Although multiple band members came and went throughout the years, their sound has remained; their influences still today are reflected by 90’s punk rock bands such as Ignite, Propagandhi, Lagwagon, Good Riddance, and Strung Out.  In fact, the band proclaims that Snakes and Ladders is their most technical and refined music to date.

Of the new single, the band says, “Life is a journey that has its ups and downs, and even though the ideal path is a straight clean line this is hardly never the case.  Even the easiest of routes can have unforeseen challenges that surface with no warning.  Such as a ship that is misguided by the force of nature that we could not have predicted, our lives are also rerouted in different directions because of the lies of those around us that force us to take alternate decisions.  We’re on unstable ground and with the right entourage the key is to find the balance between what is right and what is wrong.”

Snakes and Ladders consists of thirteen tracks: “These Fast Times” (ft.  Steve Rawles); “When Dust Settles”; “A Sea of Lies”; “Countdown to the End”; “Through Our Veins”; “Lost for Words”; “Influent Sores”; “Against All Odds” (ft.  Étienne Dionne); “All That Remains”; “The Road to Nothingness”; “Anchored”; “Silence Is Golden” (ft.  Geir Pedersen); and “Snakes & Ladders” (ft.  Valérie Morin).

“These Fast Times” features Steve Rawles from the band Belvedere (a Calgary band which I have previously reviewed).  This is probably my favourite song of the album, and is about how quickly life can slip by.  The song begins with the sound of a ticking timer and blasting into intense instrumentals, with lyrics that everyone will find relatable.

But the presently released single, “A Sea of Lies” is my least favourite.  The track begins with a soundbite of someone saying, “listen to me, anything I f***** say is a lie”, melting into a guitar riff.  This song sounds like the vocals and instruments are not following the same timing, as if the vocals were edited over the music just a few moments too late.  While this was obviously done purposefully, it makes the song sound all over the place.  Even punk music needs to have a flow.

The rest of the album all sounds very similar—too similar for my taste.  I found it difficult to differentiate between the songs, even the songs that featured another artist.  I also felt that they over-did the concept of using a random soundbite at the beginning of a song as they used this idea on at least five tracks.  However, I was very excited when I heard the beginning of the final song “Snakes and Ladders” which features a beautiful, slow, lyric-less guitar solo for the first minute of the song.  Unfortunately, the song breaks into the same aggressive, heavy format of the other twelve tracks.  The song ends by fading into another gorgeous, melodic piano solo.  It felt slightly confusing, and like the band was interrupting the solos at the beginning and end.  I really wish the band would have allowed themselves to experiment with creating a full song that was obviously out of the box for them.

Overall, Snakes and Ladders is good.  The band was correct that this album is certainly technical, and all band members are obviously very talented musicians.  The lead singer’s vocals sound very interesting—reminiscent of the singer from Volbeat.  However, I feel like they missed the mark on creativity and creating something that stands out in a sea of talented punk musicians.

From Where I Sit – A Gift that Lasts

From Where I Sit – My Teaching Days