Columns
The Voice
Beyond Literary Landscapes—Postcolonialism

For one bookworm to another, this column can serve as an introduction for those unfamiliar with these works, as a refresher for long-time aficionados, and maybe as an inspiration for readers to share their own suggested topics.  Do you have a topic that you would like covered in this column?  Feel free to contact me for an interview and a feature in an upcoming column.

WHO – This week’s topic is a bit different, as it serves as the first of a two-part guide to the Postcolonialism genre, which can be broken down into Postcolonial Theory and Criticism and Postcolonial Literature.  Those interested in a brief introduction to this large and complex topic may consider beginning with the works of a few well-known authors, namely Frantz Fanon, Aimé Césaire, and Edward Said.  In addition, readers interested in further study could also look into Homi K. Bhabha and Gayatri Chakravorty Spivak.

WHAT – The umbrella term Postcolonialism, or more specifically Postcolonial Theory and Criticism (as well as next week’s Postcolonial Literature), is a “critical analysis of the history, culture, literature and modes of discourse” on the Global South, as well as the study of colonization, decolonization, and neocolonization.  Specifically, Postcolonial Theory and Criticism examine “issues of power, economics, politics, religion, and culture and how these elements work in relation to colonial hegemony.”   (Note that an ongoing debate regarding the spelling of “post-colonial” versus “postcolonial” continues.) 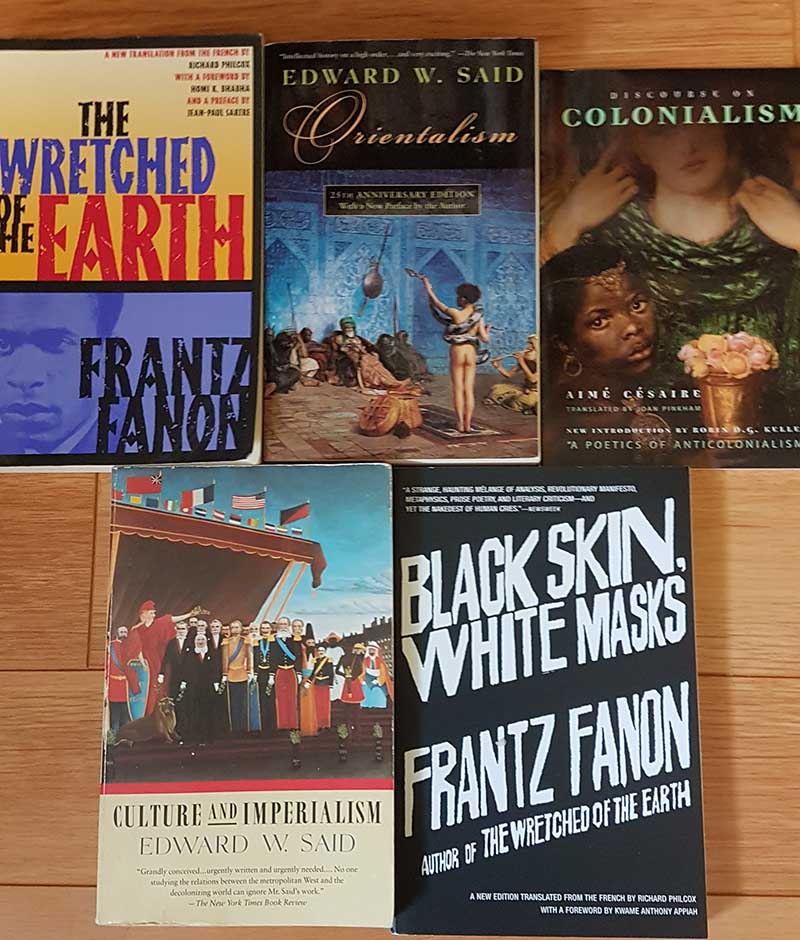 Some examples of Postcolonial Theory and Criticism include Said’s Orientalism and Culture and Imperialism, Césaire’s Discourse on Colonialism, and Fanon’s The Wretched of the Earth and Black Skin/White Masks.

WHEN – Although a long historical process, the brutal legacy of modern colonialism, as seen through the policies of various European states, began in approximately the 16th century.  Over the years, hard-won decolonization efforts by formerly colonized peoples occurred throughout many geographical areas including Africa, Latin America, the Caribbean, Oceania, and Southeast Asia.  In various ways, the process of decolonization is still occurring to this day.  The above-mentioned works, in particular, mainly take place during the late 19th and 20th centuries.

WHERE – Although Postcolonial Theorists and Critics can be found in all parts of the globe, readers may learn more about certain geographical locations, including that of Said, a “Palestinian American academic, political activist, and literary critic,” Césaire a “Martinican poet, playwright, and politician, “and Fanon, a Martinican “psychoanalyst and social philosopher” through the above-mentioned works.

WHY – For readers who are attempting to gain a deeper understanding of the effects of the colonial system, its continuing legacy, as well as resilience of communities and peoples, Postcolonial Theory and Criticism is a starting point.  During the course of their readings, students may also learn a bit more about certain Postcolonial terms and concepts, which are increasingly being used in academia, such as Othering, the subaltern, mimicry, hybridity, and double consciousness.

HOW – AU’s wide range of diverse courses make it easy to study this topic in depth.  Courses related to Postcolonialism are available in a variety of disciplines, including one’s that may fit into Degree Works.  (Always check with a counsellor to see if these particular courses fulfill your personal graduation requirements!)

AU students interested in learning more about this topic are recommended to look into ENGL 316: Approaches to Literary Theory and Criticism, a three-credit senior-level course “designed to familiarize [students] with a variety of critical perspectives and help [them] understand literary works more profoundly by integrating literary theory in [their] response to these works.”  Happy reading!