Columns
The Voice
Beyond Literary Landscapes—Journalism, Part I

This week’s column will serve as the first part of a two-part series in the wide-ranging Journalism genre.  It will primarily focus on three major authors who may serve as an introduction to Journalism in general, a reminder for fans, and an inspiration for further reading, namely Gabriel García Márquez, Alma Guillermoprieto, and Eduardo Galeano.

Students interested in further reads in this genre may also choose to pursue the writings of Joan Didion, including works, such as Salvador, which covers 1982-era El Salvador, and Miami, which covers Cuban history and politics.  Other journalists that can be of interest include the works of Desmond Cole, Christiane Amanpour, Ida.  B.  Wells, Anna Politkovskaya, and Ryszard Kapuściński.

Journalism can be defined as “the collection, preparation, and distribution of news and related commentary and feature materials through such print and electronic media as newspapers, magazines, books, blogs, webcasts, podcasts, social networking and social media sites, and e-mail as well as through radio, motion pictures, and television.”  Types of journalism include, but are not limited to, war correspondents, reporters, and columnists.

Some classics in this genre include News of a Kidnapping by Gabriel García Márquez, Guillermoprieto’s Looking for History: Dispatches from Latin America and The Heart that Bleeds: Latin America Now, and Eduardo Gaelano’s Open Veins of Latin America.

These works mainly take place during the 20th and 21st-centuries, with a great deal of focus on the political and economic upheaval of the 1980s and 1990. 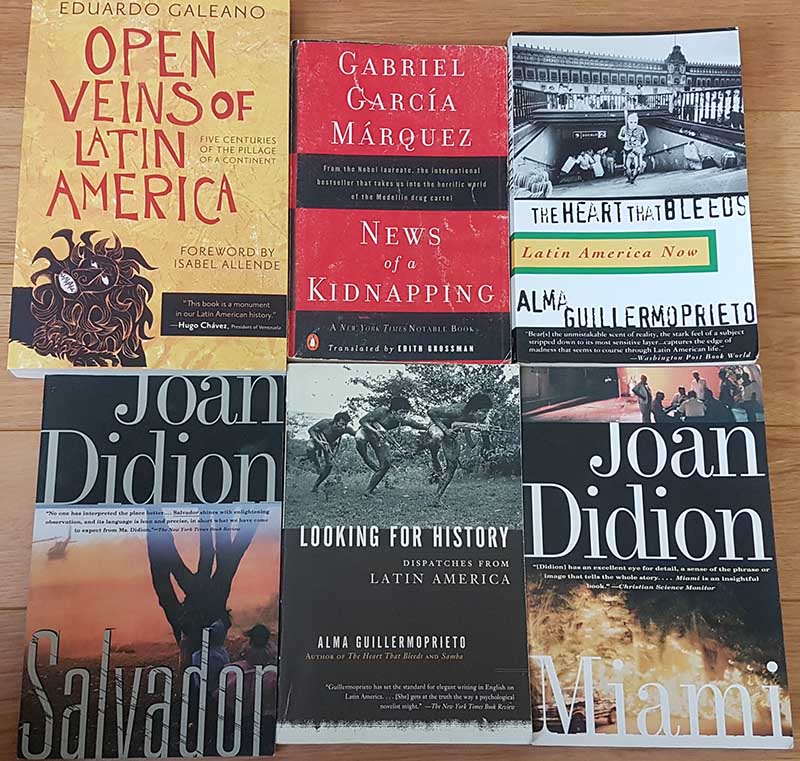 These recommendations can be a start for readers interested in learning more about the history of Latin America prior to contact, the era of imperialism and colonization, Indigenous Peoples, such as the Aztecs, Incas, and Mayas, as well as the socio-economic impacts of foreign policies that continue to this day.  For instance in these works, readers can learn a bit more about Colombia, including La Violenca a civil war from 1948 to 1958, the Medellín cartel, as well as the ELN: Ejército de Liberación Nacional (National Liberation Army) and the FARC: Fuerzas Armadas Revolucionarias de Colombia (Colombian Revolutionary Armed Forces).

AU’s wide range of diverse courses make it effortless to study this topic in depth.  Courses related to Journalism are available in a variety of disciplines, including one’s that may fit into your Degree Works.  (Always check with a counsellor to see if these particular courses fulfill your personal graduation requirements!)

AU students interested in learning more about this particular topic may consider any of the many SPAN courses available at AU, including SPAN 200: Introductory Spanish, a junior-level three-credit course, that “introduces students to the basic elements of the Spanish language.”  Happy reading!