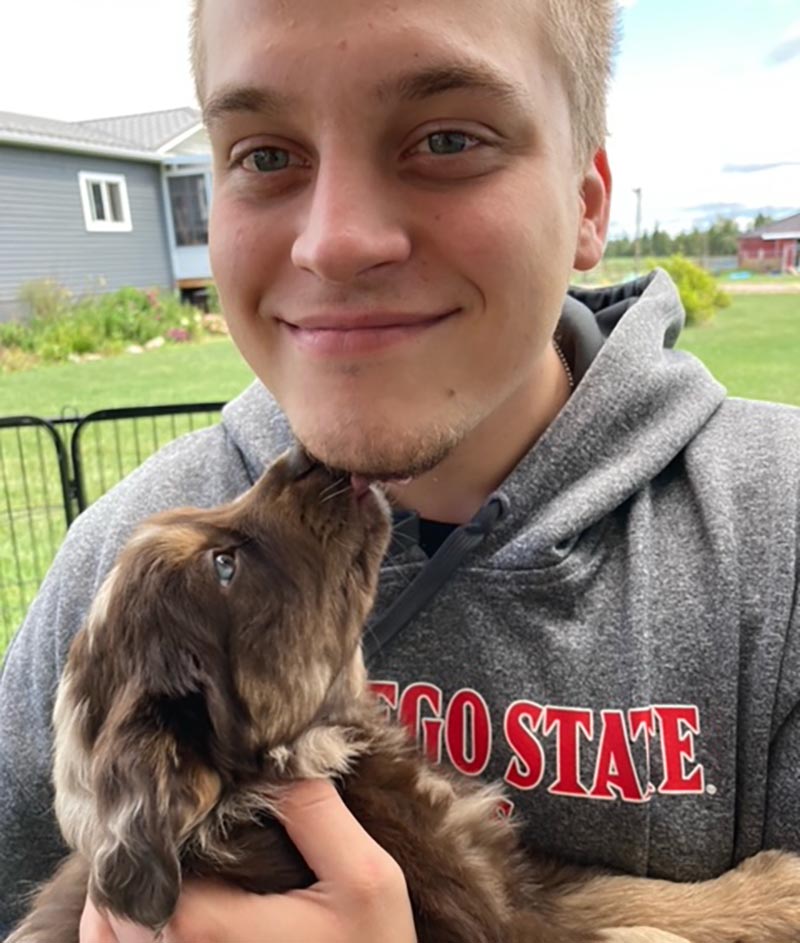 Twenty-four year old Kieran is currently enrolled in the Four-Year Bachelor of Commerce degree, with a major in Human Resource Management, with hopes of graduating in April 2022.  Kieran stated, “I decided to pursue this degree after operating and running a gas station for a while.  I knew I wanted to be in business and deal with financial/administrative/managerial work because that is what I was most comfortable with.  I plan on getting a career in the human resources or financial field hopefully with an established company where I can grow and learn long-term.”

Kieran opened up a bit about his lived experiences and road to AU, mentioning, “At age 17, I lost my brother to suicide.  He was 18 years old, and I was 17.  He was my best friend.  I fell into a deep hole and did not know where to go or what to do.  I was not motivated for a future.  I was working full-time at a gas station with no plans for my future.  Working there helped me gain the skills and proper work ethics I needed for secondary schooling.  In 2018, four years after the death of my brother, I decided to enroll in AU.  They gave me an equal chance to show that I can pursue anything I put my mind to.  Being in a classroom was too much for me and my brain while I was grieving, which is why I chose AU.  I am now in the fourth and last year of my Bachelor of Commerce degree majoring in Human Resource Management.” 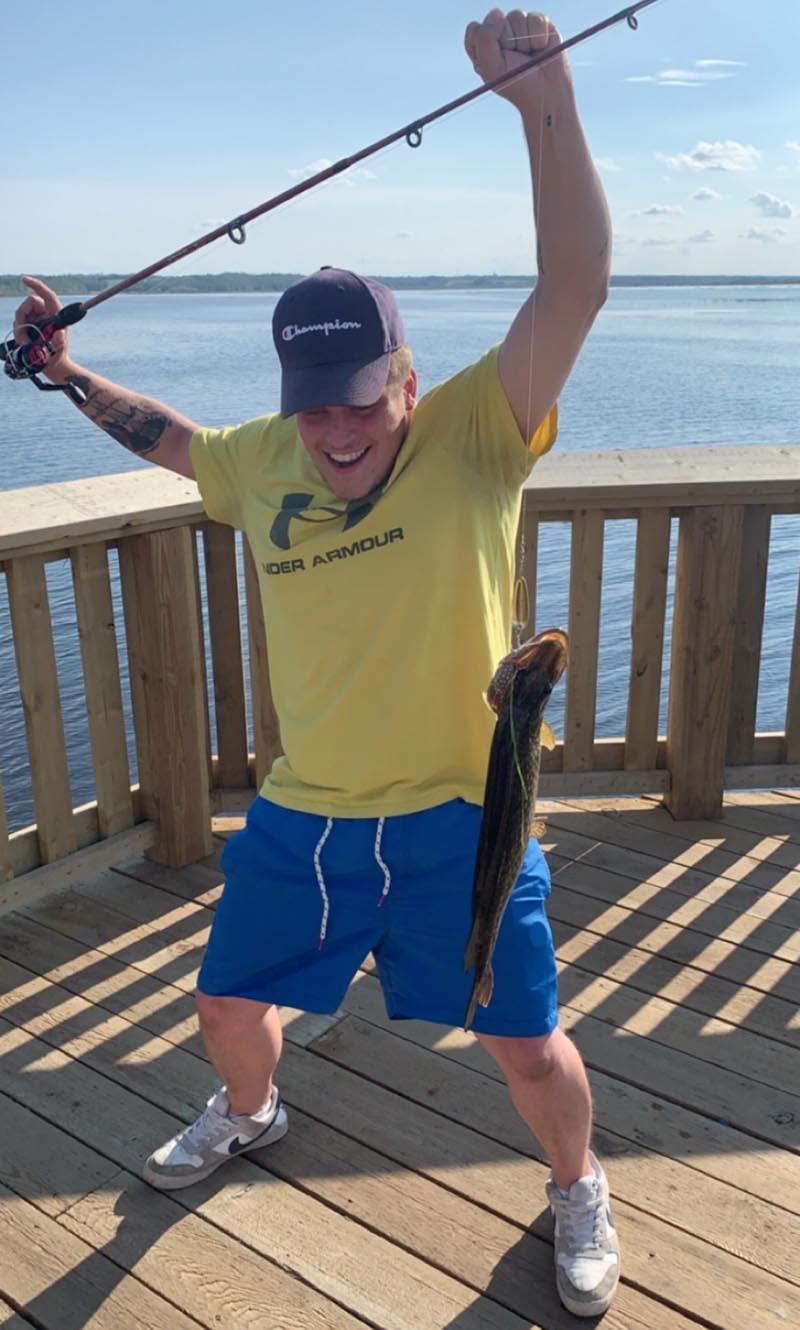 When he is not studying, Kieran told The Voice that he loves sports.  “Right now, it is sports heaven in the world with NFL, NHL, MLB playoffs, and NBA.  I am either watching the Edmonton Oilers, Philadelphia Eagles, Toronto Raptors, Toronto Blue Jays, or hanging out with my two pet goldfish, Timmeh and Shawn.  I also am a foodie and will try new restaurants often.” He also finds time to relax and has just finished watching Squid Games on Netflix, and is currently watching the latest season of Survivor.

When asked who has had the greatest influence on his desire to learn, Kieran chose his mother and father.  He explained, “Growing up, my parents had always told me to do good in school and finish school.  Once I reached high school, my head was only focused on the trades and going into the trades right away and making money right away.  After high school, I quickly learned that the trades were not for me.  I tried out being an electrician, but I hated it and honestly did not understand it; then I went into building elevators, which I ended up hating because of the physical damage it had on your body.  Eventually, I ended up going back to school and it was the best decision I have ever made in my life.”

As for his experience with online learning so far, Kieran loves it.  He reflected, “At first, it can be very stressful and difficult.  But once you figure out the tricks and make a proper schedule and organize everything properly, it becomes a commodity.  It allows your mind to focus in a more peaceful setting.  I find the focus is much better being alone at home then around many people as the brain gets distracted easily.”

Despite this praise for online learning, like many students, Kieran admitted that there was a point in his life during which he wavered in continuing his education.  He explained, “About four years after my brother had passed away, I was still in a bad place and not willing to grow or heal.  I did not want to accept the fact that my best friend was gone forever.  One day in 2018, I had a sudden motivation to wake up and change my life for the better because I know my brother would have wanted that for me and would not want me to sit and be sad forever.  My brother was the main motivation for me to change my life for the better and to start the healing process of losing him.  Enrolling in AU allowed me to start the healing process in my life and has been a healthy guideline for me in my life.”

Kieran chose ACCT 253: Introductory Financial Accounting as his most memorable course, despite feeling “so scared and nervous to enroll in this class because it intimidated [him] with how hard it seemed.”  However, he “ended up getting an A and it showed [him] that if you put your mind to anything, you can accomplish it.”

When asked which famous person, past or present, that he would like to have lunch with and why, he chose celebrity chef and TV personality, Gordon Ramsey, since it “would probably be the best food [he has] ever eaten.”  And the lunch?  “It’s definitely got to be his scrambled eggs.  They are so unique and creamy.”

The most valuable lesson that Kieran has learned in life is “to treat everyone with respect and be humble about everything in life.”  He continued, “The passing of my brother made me such a better person and made me change for the better in every area.  It’s important to treat everyone as family because you never know what they are going through or have gone through in their life.”

And his proudest moment? “One of the proudest moments in my life was winning a senior football championship in Grade 11 and Grade 12.  Being a part of such a hard-working team taught me many valuable life lessons that I keep today.  Also, paying off my brand-new Dodge RAM while working at the gas station is something I’m proud of as well.”

As a final note, Kieran let students know: “I just want to say that AU is amazing and gives equal opportunity for people to succeed in life no matter what you have gone through.”  Best of luck Kieran!

Interviews with students are one of the staples of the Voice Magazine and are regularly the articles with the most views. What can make them even better is when the student is willing to open up to both the struggles and triumphs they’ve had along the way, and the icing on the cake for this one, from the end of November 2021, is we even got some extra pictures!