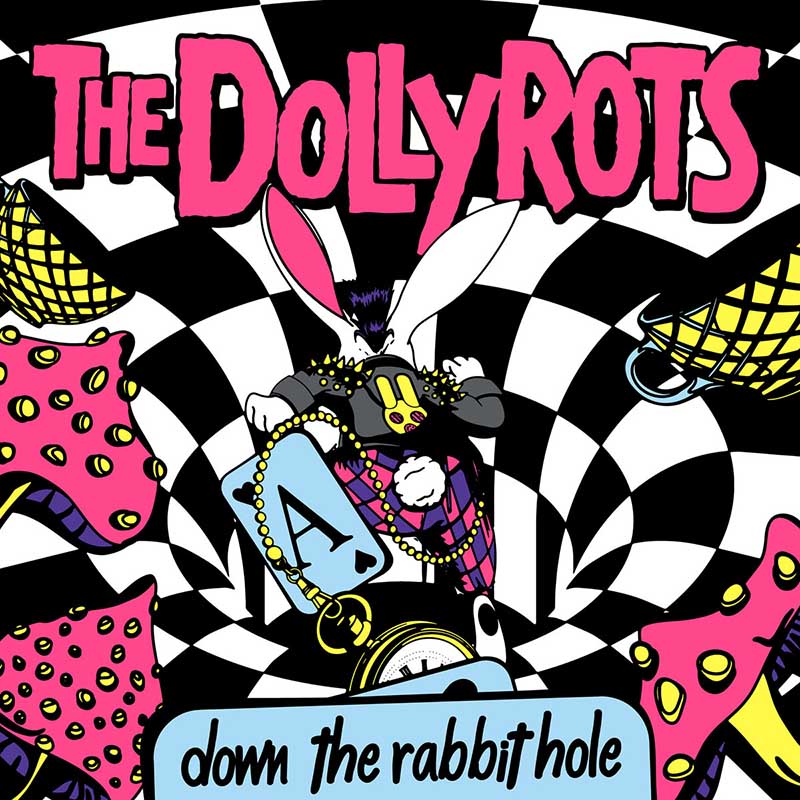 Artist: The Dollyrots
Album: Down The Rabbit Hole

Los Angeles pop-punk band, The Dollyrots, have released their latest album Down The Rabbit Hole.  The album is a collection of B-sides, rarities, and cover songs with a Dollyrots twist; featuring songs from throughout the band’s 20-year history, remastered and including some previously unheard tracks and alternate takes.  Down The Rabbit Hole is available for streaming anywhere you get your music.

The Dollyrots are made up of husband-and-wife duo Kelly Ogden (vocals/bass) and Luis Cabezas (guitar/vocals).  According to the band’s website, they have gone through several different drummers, but generally operate as a duo with guest musicians in the studio and on their various tours.  For Down The Rabbit Hole, Justin McGrath will be featured on live drums.  The Dollyrots have been inspired by bands like the Ramones, the Pixies, the Sex Pistols, Nirvana, and Green Day, and their sound is certainly reflective of that.

Of the album, Ogden says, “Putting this project together made me reflect on the career we’ve had, and I’m so grateful for all of it.  Our band turns twenty this year, which is almost impossible to believe! We couldn’t think of a better way to celebrate than a retrospective of all the rarities.”

Down The Rabbit Hole consists of 24 tracks on a 2-disc digipack.  The first disc contains the songs: Too Fun For My Health; Cloud Ten; Just Like All The Rest; Vibration; Little Miss Impossible; Get Radical (Dark Version); Be My Leia (Electric); Rebel Angel; Super Mega Ultraviolet; Valentine’s Day; Penny (Alt Version); and Nobody Else.  The second disc contains the songs: Breed; Stay; Ruby Soho; High School Never Ends; Walking On Sunshine; Da Doo Ron Ron/The Sponge/I Wanna Be Sedated; Punk Rock Girls; American Girl; Earth Angel; Dancing With Myself; Teenage Kicks; and Do You Love Me.

Down The Rabbit Hole is an incredibly fun, upbeat album.  Ogden and Cabezas’ love for music (and each other) was radiating through my phone speaker with every song.  They seem like such a cute couple and a very sweet family—according to their website, they love to bring their two young daughters on tour with them! I’m sure they had a blast making this album and will have even more fun when they are able to begin performing it live.  Ogden has the perfect pop-punk voice, and the alternative/indie covers of classic songs like “Earth Angel” and “Stay” were fantastic—the perfect mix of keeping the essence of the original song while completely transforming the sound to fit The Dollyrots vibe.  My only complaint was that the album was quite long for someone who was sitting down to listen to them for the first time, however I’m sure the die-hard Dollyrots fans are over the moon about all of the new songs they can add to their playlist.

The Dollyrots have also released a music video for the single “Just Like All The Rest”—an adorably animated video featuring cartoon versions of the couple.  “Just Like All The Rest” is probably one of my favourite songs on Down The Rabbit Hole.  It’s catchy, fun, and the perfect girl-power anthem, with lyrics like, “You’re just another average guy, you’re nothing special, not worth my time.  You gotta be something if you wanna be mine”.