Queen Elizabeth has just celebrated 70 years on the throne.  The monarch’s milestones often seem to trigger musings on the relevance of the monarchy in contemporary times.

What difference does it make?  Mandy Gardner looks at the pros and cons of Canada retaining its ties to the monarchy.  “I think it’s time we take full stock of our relationship with the monarchy and make a decision that’s based on all of the facts instead of the usual rhetoric.”  Is it Time to Abolish the Monarchy?, September 23, 2005.

A right royal cook-off.  A year later, and Mandy Gardner has had a re-think upon learning of the competition for the Queen’s birthday banquet.  “This gimmick could only have been set up by Her Majesty, like I’ve said, in a moment of lunacy.”  Happy Birthday, Ma’am – Queen is indifferent to birthday celebrations, June 30, 2006. 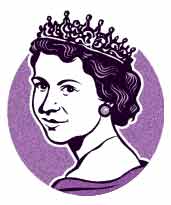 Is It Time to Abolish the Monarchy?