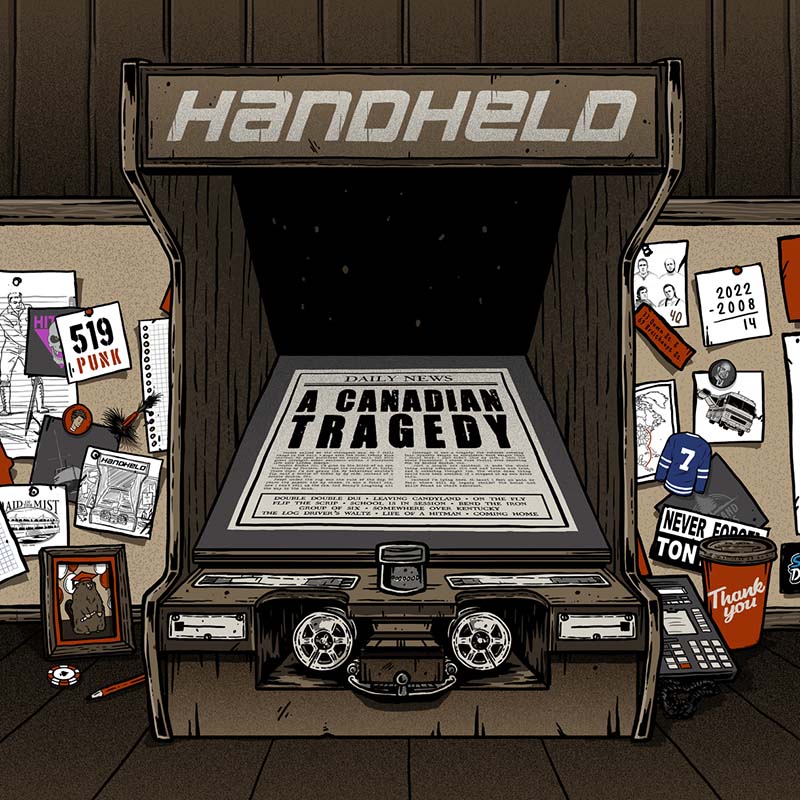 Ontario punk band, Handheld, is releasing their newest album, A Canadian Tragedy, on June 14th, 2022. The first single, “Bend The Iron” is available to stream today, with the music video dropping on March 31st.

Of the upcoming album, the band says, “Yes, sorry, we know we are friendly folk full of maple syrup and cheese curds. But Canada is not without its fair share of issues. A Canadian Tragedy is full of songs about love, irony, coverup, scandal, folklore and tradition all with a Canadian twist. Eleven fast melodic punk songs written with sing-along melodies and lyrics that make you go hmmm.”

When it comes to “Bend the Iron,” the band explains, “You’ve heard the story, bare minimum safety protocols, inadequate staffing, and corporate oversight leads to tragedy. Bend the iron tells the true tale of how the lack of attention caused one of the worst rail disasters in Canadian history, claiming the lives of over 45 residents and destroying a picturesque lake-side town in Quebec.”

For those who don’t know, on July 6th, 2013, an unattended runaway train carrying 7.7m litres of petroleum crude oil barrelled into the small town of Lac-Megantic, Quebec. The train reached speeds of 104 km/h before jumping the tracks and bursting into flames. 47 people died, over 2000 people were evacuated, and dozens of homes and most of the downtown core were destroyed—this is not to mention the lasting mental health and environmental impacts that the town is still coping with.

“Bend the Iron” is your typical, fast-paced, melodic punk song, reminiscent of Billy Talent. The track features Emilie Plamondon (Canadian Instagram influencer) doing some back-up vocals. There’s nothing wrong with the song’s sound, but I do have an issue with some of the lyrics, as well as the way that the band has handled this sensitive topic in general.

First, the beginning of the song incorrectly describes the series of events leading up to the crash. Handheld sings, “Up high on the mountain was a motorman/alone he worked away/a few handbrakes and he finished for the day,” and later claim that “the brakes failed.” In actuality, the engineer engaged the airbrakes on the train when he parked on a downhill slope and left for the night, but forgot to also engage the handbrakes. When a small fire broke out on the unmanned train due to improper mechanical work, firefighters attended the scene and extinguished the fire. Unfortunately, the firefighters also unknowingly disengaged the airbrakes when they turned off the engine of the train, which led to the train rolling down the hill.

Second, the lyrics describing the crash and the aftermath are crude and completely uncouth. Handheld sings, “The local hospital waited for the wounded/should’ve called the morgue instead” and “the wounded were all dead.” I can’t imagine a more insensitive way to talk about an event that devastated so many people. “Bend The Iron” feels like a band capitalizing on a tragedy for their own gain. The victims of the Lac-Megantic rail disaster deserve more respect than this.