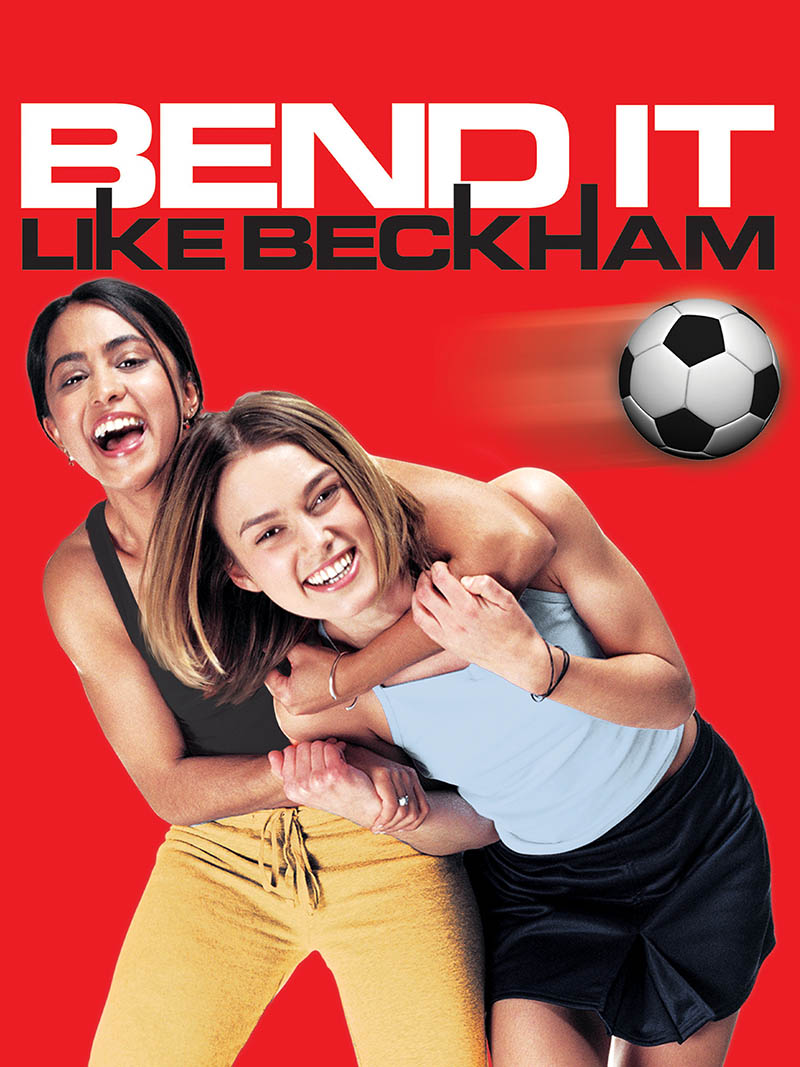 Sports films led by women characters often integrate supplementary themes such as growing up, overcoming prejudice, and/or falling in love.  It’s not every day, however, that we see one addressing the protagonist’s struggle to not only make it as an athlete, but also to reconcile the cultural differences she stands between.

In the highest-grossing soccer film since its 2002 release, Gurinder Chadha’s Bend It Like Beckham, we are spectators of Jesminder “Jess” Bhamra’s dilemma; she’s a British Sikh teenager who dreams of becoming a professional soccer player, much to the dismay of her religious family that believes in stringent roles for Indian women.  Jess must decide, then, how she’ll achieve her goal while also honouring her roots.

Jess is a charming, quirky character whose arc is about learning to tactfully communicate her wishes to other people and negotiate the roles expected of her in every facet of her life.  Throughout the film, her multiplex identity is fleshed out by the relationships she has with her relatives and peers.

Our budding soccer star begins her journey at home, where she studies diligently, does housework with her mother, helps prepare for her sister Pinky’s wedding, and hosts gatherings, among other things, with the latter being particularly useful for scoping out a prospective suitor who could be arranged to marry her.

Despite bending over backward to prioritize soccer over these obligations, however, Jess does want to please her family and expresses remorse whenever she disregards their concerns.  Considering that we didn’t have notable media dedicated to Indian, much less South Asian women at large in the west by that point, I think this nuance is important to discuss.  It wasn’t until recent years when we’d explore the first-generation experience deeper in shows like The Mindy Project and Never Have I Ever, but Beckham was the only time we’d witness a first-gen woman of colour in sports who neither fulfills the “model minority” trope nor assimilates entirely into the dominant culture.  Such characters, who don’t often get to be the leads, have been frequently relegated to stereotypical depictions one way or the other without much depth if at all.

Seeing Jess work to overlap her communities so that everyone feels more involved in her life—just as she is in theirs—is far more relevant than any attempts to “modernize” the character because her actions mirror the responsibility we might feel we have to improve our own relationships.  While we may not always gain personal satisfaction from doing certain things for others, they can absolutely help us sustain trust and kindness toward one another.  Jess undoubtedly appears more human and present as a character in this regard.

Jess’s relatability to wider demographics could be twofold; she shows the importance of unlearning stubbornness so that we can be patient and grow with our loved ones—as opposed to antagonizing them or shutting down when conversations become uncomfortable.  On the other hand, her development perhaps speaks to those of us who (initially) believe we have no choice other than to act out and sneak about like she does, since our needs are either being neglected or abnegated.  The consequences that arise from mistakes both parties make can serve as a catalyst for necessary discussions.

I think there are two subtle, intertwined commentaries that the film reinforces: the first is that Jess is a reflection of her parents, particularly her mother, having to earn their stripes upon moving to London so that they can be taken seriously when calling the shots.  Beckham’s narrative seems to support the notion that the bar is higher for women, especially of colour, to prove themselves in their endeavours and to be responsible for championing their own agency despite the systems they partake in being rigged against them.  This segues nicely into the second commentary: that we shouldn’t only praise resilience, but also ensure that unconditional love supersedes discriminatory approaches to testing one’s merit.

The latter definitely applies to the other major domain of Jess’s life.  We meet her on the soccer field next, which is as socially concerned as it is action-packed.  Whether it’s keeping secrets with the character Pinky or getting dressed in a sari by her teammates for the wedding, placing Jess in situations where one environment affects the other lends much more credence to her struggles and bonds.  What this also does, I’d argue, is nuance her values; her personal life intermingles with an already-diverse sport setting where the women endure gender-related, racial, and financial tensions.

Their team receives little support from spectators (and some of those who do come to watch come to make sexist remarks) and sponsors.  Even referees enable derogatory behaviour from rival players.  The team also anticipates that their coach, Joe, will eventually leave them in favour of an opportunity to train a men’s league.  What this means for Jess is that she must build rapport with her teammates by sharing their burdens and devising game plans to win over the skeptics.  Though that’s not all; the vulnerability and compassion she cultivates with them transcends sharing the same change room and into the understanding that their life experiences are what bind them, not just the game they love.

While it’s never explicitly addressed in the film, I believe it invites the question of whether Jess actually appreciates her feminine side but is pressured to conceal it.  Self-expression can often be complicated for women because our choices are thought to carry implications for what roles we could play in society and how we’ll be perceived by others.  I do appreciate that despite the occasional catcall Jess receives, her beauty is never objectified from a filmmaking standpoint, and even when she is in full dress it’s a celebration of her culture rather than exoticism.

Unsurprisingly, platonic and familial love take precedence over romance in Beckham.  To be sure, it has its place in a Jess’s life – she just doesn’t have to base her decisions around it.  Her relationship with Joe is incidental but still noteworthy because of how it compares with cultural expectations.  While Jess keeps her parents in the loop and wants their approval, she chooses her partner based on parameters she finds suitable and sets the pace for their relationship with him.

There are positive takeaways here for Beckham fans, especially younger ones: being yourself doesn’t mean you’re confined to particular ways of thinking, acting, and living.  You certainly aren’t obligated to be entirely divorced from your heritage and conform to values someone else considers beneficial for self-enrichment.  For me, progression comes from a creative attitude toward performing in your roles, whether it’s deciding on principles that matter most to you or blending them together.  They can be worth celebrating regardless of whether others subscribe to them.  I oppose the idea of depicting individuals who don’t “fit the bill” as deserving of isolation or punishment in media because it may encourage a similar mentality in the real world.