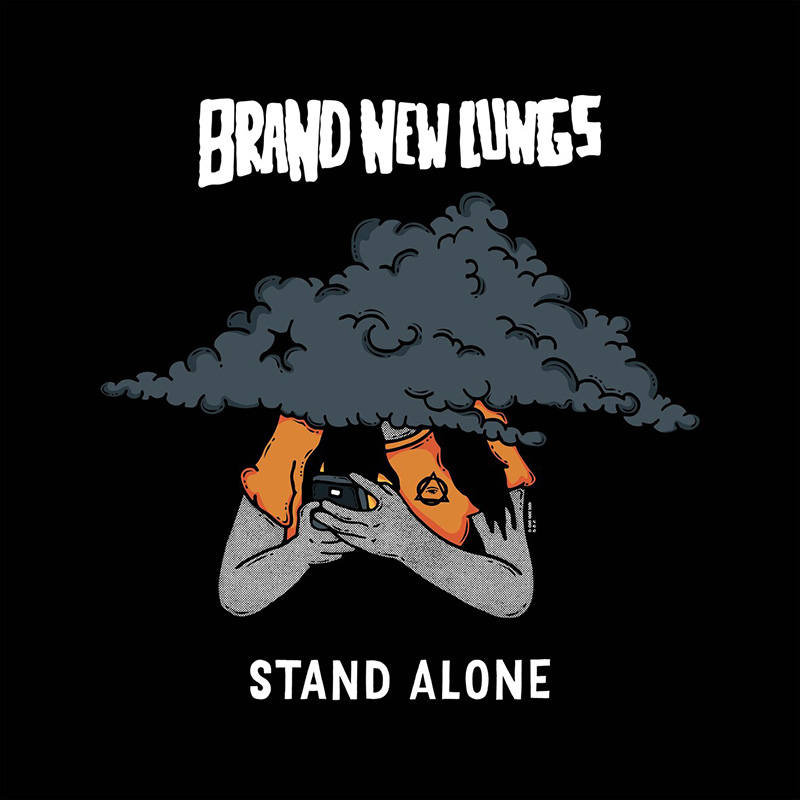 Montreal, Quebec’s Brand New Lungs, have released their new single “Stand Alone”.  The song is their first new music since their debut album, Like Wildfire, and is available anywhere you get your music.

Brand New Lungs describes themselves as “four dudes from Montreal, Canada having fun doing some catchy punk rock.  Strong from a lot of past experiences, they joined forces to drink beer and make noise!” Sounds pretty cool to me.

The band describes “Stand Alone” as “an aggressive but heartfelt 90’s-influenced punk rock song, with infectious hooks and an uplifting message.  You don’t stand alone!”

Clicking on the lyric video for “Stand Alone,” I was immediately transported back to my high school “emo kid” days.  The art for the video includes white chaotic block letters against a black background, and a cartoon drawing of a long-haired man on his phone, with a black cloud replacing his head.  It reminds me of the graphics on every 90s – early 2000’s emo album.  I love it!

Unfortunately, I wasn’t as impressed with the actual song.  “Stand Alone” is certainly 90’s-influenced punk—reminiscent of bands like Skillet, Breaking Benjamin, or Three Days Grace, all bands who have mastered the “aggressive emo” vibe.  While I see what Brand New Lungs was going for, it missed the mark for me.  The lead singer’s vocals resembled shouting more than singing, which is common for 90s punk, but I was hoping for a catchy hook or melodic chorus.  We did get a guitar solo about three quarters of the way through the 3 minute, 41 second song, but that was the extent of the excitement.

Lyrically, “Stand Alone” seems to be a song about depression, or at least going through a difficult time, and deciding to save yourself.  The lyrics to the chorus are: “I gotta learn from my problems/I’m just a kid, just a fraud, just gone/all out of luck, out of line, but not yet done/I won’t stand alone/I got these arms wrapped around me/I won’t stand alone/And when all hope is gone, when all the cards are drawn/And the whole world around has become mad/I won’t stand alone.” The chorus is repeated three times throughout the song; the second time the lyrics become “you won’t stand alone” and the third time they become “we won’t stand alone,” symbolizing community and that we are all in this together.

I love that Brand New Lungs wanted to put a positive message out into the world.  I love music with meaning.  However, the lyrics feel surface-level, and I’m not sure if I love the final verse, “I’m gonna save myself/you’re gonna save yourself/we’re gonna save ourselves.” The trope that depression and other mental illnesses are something that a person can just get over if they try hard enough and the “pull yourself up by your bootstraps” mentality are simply dangerous.

Overall, “Stand Alone” was mediocre for me, but I’m excited to hear what else Brand New Lungs has to offer.