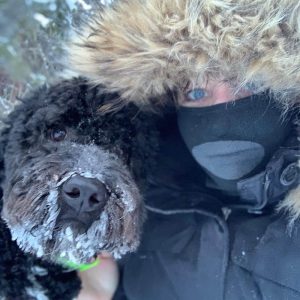 The Voice Magazine recently had a chance to chat with Bonnie Mitchell (she/her) from central Alberta, “a full-time student enrolled in the four-year Bachelor’s degree in Psychology with a minor in Anthropology.”  Bonnie “will be moving on to a graduate degree as soon as [she] finishes the Bachelor’s degree.”

She explained, “My Master’s will likely be in counseling, but I am still exploring options, I would like to find a concentration on military/first responder/trauma related psychology.  I never intended to become a psychologist but after a 16-year career in law enforcement as an emergency dispatcher for the RCMP, I have first-hand experience with the abysmal state of mental health support for our first responders.

“We are losing our heroes to mental illness and suicide at an alarming rate, and the government and organizations responsible for our first responders are doing less than the bare minimum to help.  I suffered from untreated PTSD for years before being able to seek treatment, and I had to do it alone, without any assistance from my employer.  I have previously dedicated my life to being of service to my community and my country, and now I am dedicating myself to being of service to our first responders and armed forces.

“My father always told me ‘If you want something done right, you have to do it yourself.’  I have never felt the accuracy of those words so much as I do now.  I already spend much of my time assisting other first responders in navigating the bureaucracy and red tape around getting help for mental and physical injuries suffered on the job; so, becoming a registered psychologist will give me the power to do even more for these deserving people.”

On a more personal note, Bonnie “grew up on a Canadian Airforce base in central Alberta and have made [her] permanent home not far from that location.”  “I am a born and raised Alberta girl, but my father is from the east coast, and I consider it my second home,” she continued. 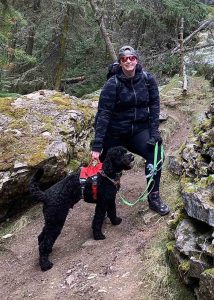 Although Bonnie “used to be an obsessed avid reader, but [she] simply [has] no time now!”  She stated, “I have started using audiobooks on road trips as my only option.  I am currently wrapping up Sapiens by Yuval Noah Harari.  An amazing book, I highly recommend.  Anyone interested in psychology, sociology, history, anthropology, or anything to do with human behaviours will love this book.”

Although she does “not have much free time these days with being a single mother, a full-time student, and part time shift worker,” she does “manage to carve out leisure time … outdoors with Clyde, [her] 65-pound Australian Labradoodle.”  She continued, “Being in nature is important for my mental and physical health.  I enjoy hiking (the beginner kind) and being in the woods or around water.  My best friend and I have paddleboards, and though I spend more time falling off than actually ‘paddleboarding,’ it is still one of the best investments I have made.  We have two boards, so it is perfect for a day at the beach with everyone in our families’ taking turns, including the kids.  I also love exploring the riverside and nature trails with my dog, and I am drawn to the mountains whenever I have time.”

When asked who in her life has had the greatest influence on her desire to learn, Bonnie chose her “mother for sure,” explaining, “She married my father very young and, like many women of her generation, she was a homemaker through my early childhood.  When I was a preteen, she went back to school and set out to obtain a teaching degree.  Due to financial reasons, she had to leave school one semester before graduating and re-entered the workforce.  She did not allow this to be her downfall, in fact she turned the necessity of full-time work into an achievement greater than a teaching degree (in my opinion), as she smashed glass ceilings throughout her career in the finance industry.  She used the education and life experience that she had to propel her through a fast-track course of her own making from being a bank teller to being a branch manager.  A highly successful, award-winning one at that.  She was so often the only woman at the table in corporate Alberta finance and she never stopped learning more and achieving more.  She inspired me to have the courage to seek advancement in every part of my life, through my career and now through my education.”

As for Bonnie’s experience with online learning so far?  “I love online learning.  Due to many years of high stress shift work, I do not think I would be nearly as successful in a classroom setting *enter not-so-subtle brag of straight A academic record*.  I do my best work between 3pm to 3am, I always have music on in the background, and my dog is always at my side.  These methods would not be possible in a classroom.  The only thing I dislike is that I believe the Athabasca University tutors do not always readily provide relevant guidance.  We pay the same amount, or more, for these courses as traditional classroom classes, and those instructors would never consider telling their students to figure something out on their own when asking for clarification.  I feel really frustrated about these issues; I would like to see AU mandate a more involved approach with their tutoring procedures.”

And her most memorable AU course?  “Although the psych courses are my passion, the MATH215 course on statistics is the most memorable.  I was never great at math in high school, and I thought I would barely pass it.  Just glancing over the formulas and graphs was so intimidating.  Once I got into the course, I realized that my brain must have developed a math capability at some point, because not only was I good at it, but I was also enjoying it!  The excitement of solving a huge problem with an entire page of equations to show for it was something I did not expect.”

When asked what her project would be as the new president of AU, Bonnie stated that her “first order of business would be to reformat the tutoring system.”  She explained, “I would implement a system where there were tutors that worked as course guides, not just assignment markers.  The course guides would answer questions about the way the course works; they would be specific about the expectations on assignment formats and be open to debate course content.  The tutors would provide a generic sample assignment for each type of assignment to show students what their style preferences were.  The point of university level education is to learn the subject matter, not to learn how each tutor likes to have a research paper formatted.  If students are just given guidance on navigating the courses and on assignment formatting, they can then concentrate on learning the material, and achieving higher grades.” 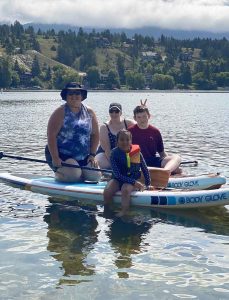 When asked which famous person, past or present, she would like to have lunch with, and why, Bonnie stated that she would “love to chill with Elon Musk and pick his brain.”  She continued, “I’m neither for or against Elon Musk in any way, but I objectively have to recognize that he is an incredibly unique human.  I’d like to discuss his philanthropic views, his understanding of neuroscience, and obviously I would have a few suggestions regarding where he could place some of his money.”

The one thing that distinguishes her from most other people is “a sewer mouth that would make Samuel Jackson blush.”   “I think being a tomboy on a military base and then entering law enforcement just fostered an environment where I could learn all of the bad words and use them eloquently and enthusiastically.  My favourite word is the F-bomb but my repertoire is extensive.  When I have my professional personality in gear, most people would never believe it, by my mother will testify that the language used in my personal life has taken years off her life,” she stated.

Bonnie’s proudest moment in life has been “the day that [she] was formally sworn in as a Civilian Member of the RCMP at the Division Headquarters and raised [her] right hand and said the words of [her] oath and received [her] regimental number.”  She explained, “My father was so proud that I had chosen a career in public service instead of going for corporate wealth.  My family has a lot of military and government service involvement; it was an honour to join them in serving my country.”

And her most valuable lesson learned in life?  “People die, a lot.  All kinds of people, all kinds of ways.  TELL THEM YOU LOVE THEM.  You never know when a life is going to end early.  You will live the rest of your life desperately hoping they knew you loved them.”   Best of luck Bonnie!