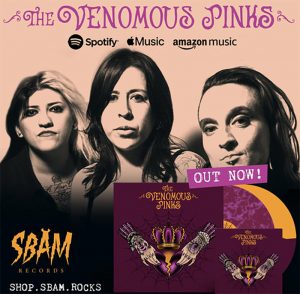 Arizona’s punk-rock trio, The Venomous Pinks, have released their debut album, Vita Mors.  The album is available for streaming anywhere you get your music.

The band consists of Drea Doll on guitar and vocals, Gaby Kaos on bass and vocals, and Cassie Jalilie on drums.  The Venomous Pinks describe themselves as Bikini Kill and T.S.O.L colliding with a Russ Myers movie—”an unapologetically, uniquely addictive, in-your-face punk sound.”

Vita Mors, which translates to “life and death” from Latin, deals with subjects such as persevering heart-wrenching losses, fighting sexism, and social justice.  Of the album, the band says, “Alright.  You’ve got one life.  One chance.  Always do your best.  Stand for what you believe in.  You’re much stronger than you think.  When you really want it, you are unstoppable.  Hold on to what your heart speaks.”

Vita Mors contains ten tracks: “Mercy”; “I Really Don’t Care (featuring Bad Cop)”; “No Rules”; “We Do It Better (featuring The Last Gang and Brenna Red)”; “Cross My Heart and Hope to Die”; “Broken Hearts Club”; “Apothecary Ailment”; “Hold On”; “Todos Unidos (featuring Efrem Schulz and Death by Stereo)”; and “We Must Prevail”.  The song “Broken Hearts Club” has a music video on YouTube.

The first thing I thought when I listened to Vita Mors was: all-female version of The Sex Pistols.  Raw instrumentals, snarling vocals, and aggressive, in-your-face anarchy makes up The Venomous Pinks’ sound.

“We Do It Better” is a feminist anthem, with lyrics like, “These rules I won’t obey/So, listen to what I say/It’s my life and my way/You’ll never bring us down, man.” While “Hold On” is a testament to the mental health struggles so many of us are familiar with.  “Cross My Heart and Hope to Die” is definitely my favourite song on the album—a toxic relationship manifesto.  I also thoroughly enjoy the addition of Spanish lyrics woven throughout many of the songs, such as the track “Todos Unidos,” meaning “everyone together” in Spanish.  Considering approximately 31% of Arizona’s population is Hispanic or Latinx, it’s great to see The Venomous Pinks representing their language and their culture in a genre that is most often represented by white men.

The music video for “Broken Hearts Club” looks like a well-produced home video of the band recording their song.  It’s raw, not too flashy, and showcases The Venomous Pinks being themselves.  The video cuts and features a tribute to the band’s loved ones (perhaps lost by suicide, but it’s not specified)—Johnny Wilson, Bertha Sofia Jalilie, and Ozzy Gonzales—and a beautiful quote: But what is grief, if not love persevering? The music video ends displaying the number for a 24 hour suicide hotline.  This music video obviously meant a great deal to The Venomous Pinks, and I appreciate their vulnerability.