Columns
The Voice
Fly on the Wall—Everyday is Father’s Day for Time Management! 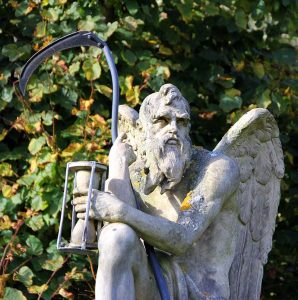 If necessity is the mother of invention, then time management is surely the father of success.  Insouciance being the stuff of lazy students, and, we being human and thus prone to that moniker, it can only aid our travails to pay homage to that great beckoning invisible clock that abides over and above our study regime.  Distance education cuts to the core of time’s reality with a razor’s edge; nowhere else in life does the addition of something to do seem at first so doable and then so catastrophically challenging.

Many, myself included, have begun a course at Athabasca only to be mortified weeks later to realize how very little progress has been made.  Time flew and papers rustled but precious little had been accomplished.  Eventually time meets will and motivation ensues, it’s a mix of mystical mystery and machine certainty this process of coming to terms with time.  Self-discipline and attention span are indispensable rites of success.

Sadly, some students never do finish their initial course.  Others have to pay for an extension and a third category, well, they drift away like sands through that eternal hourglass and quietly change the subject when asked how their education is going.  They cancel AU out of their personal culture of popular conversation topics.  In any case, while paying homage to our fathers and the other excellent males in our life, it’s also worthwhile to consider some core realities of time itself, the great patriach (if you will) of existence for we human beings.

Raymond Tallis provides some bright and humorous considerations about the nature of time and how difficult it is to know and understand it: “We often speak poetically of the ‘flow’ of ‘the river of time’.  This is clearly wrong, because rivers, unlike the water in them, do not flow – otherwise maps would be continually out of date, with all rivers disappearing into the ocean.”

“How quickly would it flow?  The obvious answer, one second per second, demonstrates the vacuity of the very notion of ‘time on the move’.  Velocity or rate cannot have the same dimension on both the numerator and the denominator” (online).  The notion that time flows as fast as time does is pretty much the ultimate definition of a tautology.  We at AU, however, know time most presciently by its consequences for good or ill.

However we map and parse time, the end result is that only our ability to self motivate will get us to where we want to be.  And, realistically, our inner lazy bones lead by leaps and bounds in the evolutionary race for self preservation.  Only when impelled by hunger or fear do creatures in nature truly put their best paw forward and, sadly, that implies that only with a certain deadline anxiety will we truly reach our academic potential.

On the other hand, having goals is itself a way to seize golden opportunities without feeling perpetually pressured not to fail.  In fact, the whole idea of adult education is to study what we enjoy and not only what we are forced to.  With cash and credit we all elect to be here so in some sense every course is an elective.  And if that thought falls flat we can at least recall that we’re privileged to be back in the virtual halls of a hallowed institution like post-secondary education at all.

Perhaps the way we think and plan about time leads us astray in our studies.  Sometimes to stop having a schedule and to cease thinking in time increments can allow us to feel the whimsy of our study prowess spring into action.  Just relax and let the brain juice flow, right.  It’s certainly worth a try, adopting an unscheduled schedule, because attempting to perpetually catch up to the goal of attaining a set number of study hours per week can be gratingly detrimental to the self esteem.  We have to make peace with time and find a healthy relationship with it.  After all, it’s always there, just like the man (or men) who raised us and are our beloved fathers.

Time may be more impersonal than a person but that’s no reason not to adopt a healthy way of feeling about it.  Phrases like it’s always five o’clock somewhere and anytime is fun time spring to mind, and, academically speaking, study time can be like any spontaneous act: something that just happens and is enjoyable.  Like, what if time was titled ice cream or nachos?  How we think about anything goes a long way to how it is for us.  Those who experience ambivalence about their own dad figures know this well.  Anyway, making studying a more enjoyable time can be like renaming Mondays as Fundays and calling it a day.  The attitude we take to our study time can make it less like something to corral, tame, or just generally endure, and more an opportunity to put our best brain forward.

So what about eternity, though, don’t most things get done that are destined to be so? Well, to take a foreign reference in hand, George Bernard Shaw once said that “The English are not a very spiritual people, so they invented cricket to give them an idea of eternity” (online).  If you’ve ever paused your netosphere surfboard and watched some cricket, not highlight reels mind you but a full real-time set of innings known as overs, you’ll note what Shaw was on about.  See, in cricket, there are literally ten outs per inning and batters can be there at the wicket swinging up to and including when the cows of dusk come home.

Crucial to us, studying is likewise the fact that, though exams may haunt our horizon, there will always be more extra readings and essay footnotes to read and write, and more hollow tunnels of library research to investigate, studious handheld candelabras of our lit imagination in hand.  Studying can be as endless as our inquisitive minds allow— and that’s a good thing—because time flies when we’re having fun and/or our interest is piqued.

But affixing mere terms like study time to our mental processes doesn’t really do justice to the magic of the AU experience.  Maybe the tie that binds eternity and time for our purposes is that we feel enough of a semblance of a oneness between ourselves and our studies that we can find peace and pleasure in both.  Plato (360 BCE) for his part believed that the universe was held together by some Prime Mover or other who “resolved to have a moving image of eternity, and when he set in order the heavens, he made this image eternal but moving according to number, while eternity itself rests in unity; and this image we call time” (online).  Connecting the loose tether of our desire to the raw necessity of our needs is core to maybe the greatest learned skill of all: attention span.  Paying respect to father time as the arbiter of our success in many ways allows us to respect this noble reality of student life.