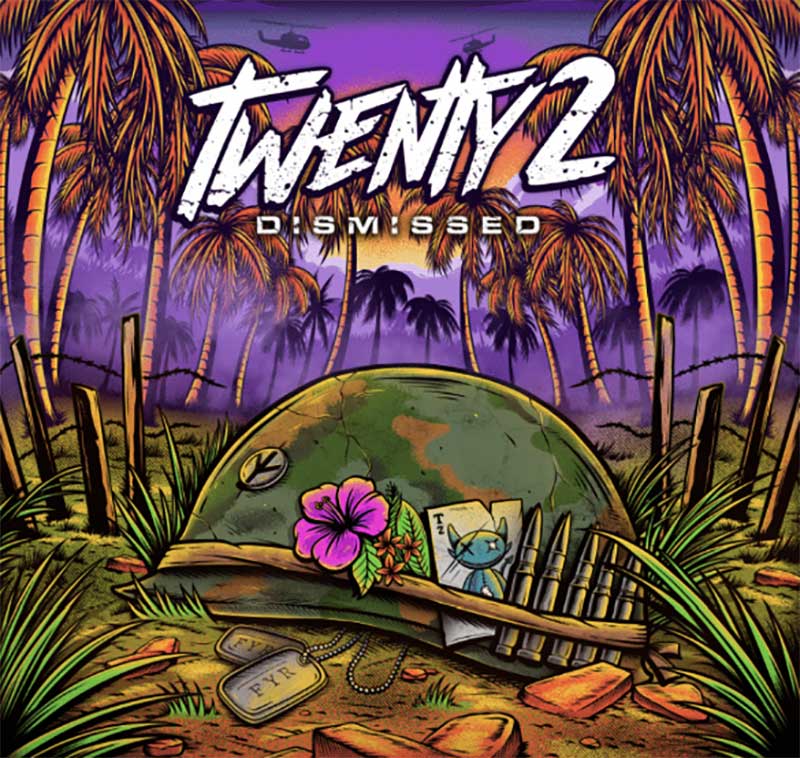 Montreal’s TWENTY2 will be releasing their third album on July 22nd, 2022, titled Dismissed.  The album will be available for streaming anywhere you get your music.  Currently, the single “Grudge” has already been released, with a lyric video available on YouTube.

TWENTY2 describe themselves as melodic punk bordering on hardcore.  Dismissed began in 2021, while lead singer Jon H. was isolating due to COVID.  He reached out across the continent to a member of one of his favourite bands and major influence, Luke Pabich, of the band Good Riddance.  Together, they co-wrote the album over Zoom and Facetime.  When it was time to record, Jon, Luke, and the other artists featured on the album recorded separately in various cities.

Lyrically, Jon says he “wrote a lot on social and political issues that have been obsessing him.  Fighting against political and social hypocrisies and censorship, while standing up for free speech.  As well and as usual, personal matters were explored, such as losing people you love, getting betrayed by people you trust(ed), trying to make sense of your own brain, and breaking up with social media.”

Dismissed consists of thirteen tracks: PRE-CONDITIONED; CONDITIONED; UNDERNEATH; SETUP FROM THE START; GRUDGE; ERASE YOUR FEAR; FUCK YOUR RULES; BEFORE YOU SAVE US; I’M (NOT) DONE; ADULTEEN; I KNOW IT’S YOU; WHAT SHE DID; and OUT OF MY HEAD.

“Grudge” certainly has a fast-paced, melodic punk sound.  The lead singer has an incredibly interesting voice—raspy and growling but still pleasant to listen to.  TWENTY2 reminds me of bands like A Day To Remember, Bullet For My Valentine, and Seether.

The song title is quite fitting, with the opening lyrics: “I’m still thinking about it/I still carry it in my head/I’m still pissed off about it/And I think that I want you dead.” “Grudge” is an extremely relatable song for anyone who has ever been betrayed.  The song is vague enough on specific details that it could apply to a variety of experiences, while highlighting the intense feelings that come with being stabbed in the back by someone you trusted.

My only complaint with the single and the album thus far is the cover art.  As per the YouTube video, it seems to feature a Battlefield Cross memorial—the iconic symbol of honour, sacrifice, and respect for our fallen soldiers.  The memorial usually consists of the soldier’s boots, rifle, helmet, and dog tags, however, in this rendition, the rifle is replaced with a hanging microphone on a stand.  Furthermore, purple poppies surround the “memorial,” instead of the classic red poppies—a powerful symbol of remembrance.  Purple poppies may also represent animals who were victims of war, however it is unclear if that is what TWENTY2 was trying to convey.  I’m not sure how I feel about using such a symbol for an album cover; I wonder if soldiers, veterans, or their families may find it to be disrespectful.  Perhaps the rest of the album may give the art more context.

Overall, I really liked “Grudge”.  I’m excited to hear the rest of Dismissed on July 22nd!