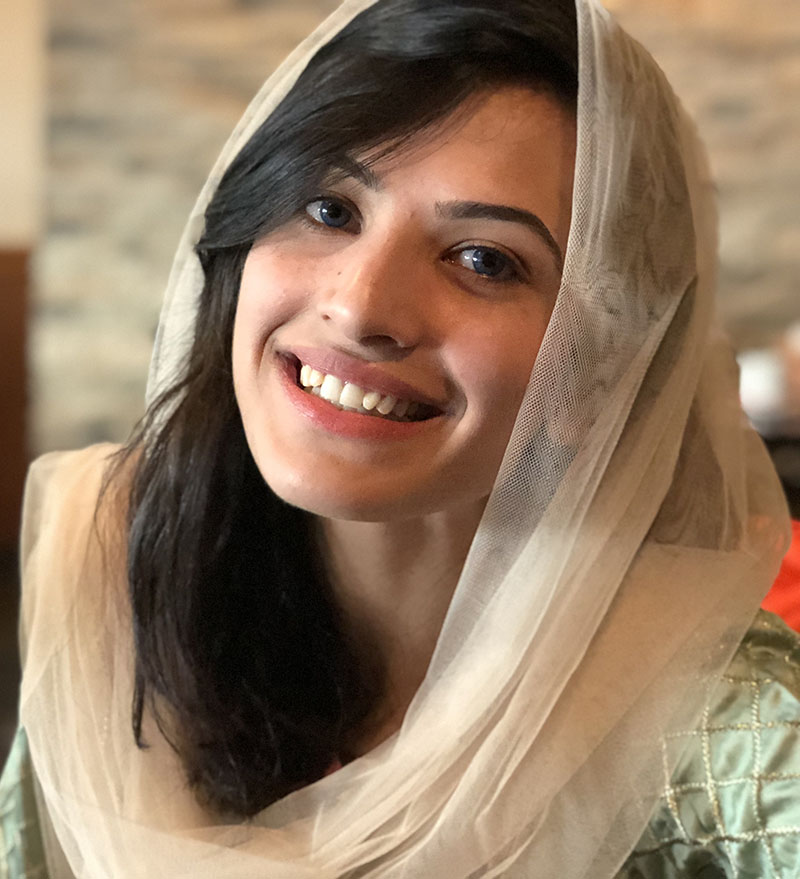 The Voice Magazine recently had a chance to chat with Ummara Naseem (she/her), currently residing “in Edmonton, AB, which was the first place [she] came to from Pakistan in 2015.”

Ummara is currently enrolled in the Bachelor of Commerce, Human Resources Major.  She stated, “I hope to secure a position within the government, be it municipal, provincial, or federal, when I graduate.”

On a personal note, Ummara is “a mother of 3 phenomenal kids who loves to plan events, bake cakes, and make super cool Instagram posts!”  When she is not busy studying, she spends time with her family.  She also enjoys reading.  When asked which author has had an impact on her life and why, Ummara chose “Sir Muhammad Iqbal, one of the greatest poets in the 20th century.”  She explained, “His poems and philosophy have been guiding stones in my life.”

With regard to her AU studies, Ummara joked that the best way to study is “[w]ith [her] eyes open!”  However, kidding aside, she did have some advice for students.  “I study so I can be a role model for my kids.  With 3 kids, it can be tricky to get time to study, so it really comes down to how well I can adapt my studying around my kids.”  She continued, “I listen to videos or read my notes on my phone when putting the kids to bed, and then I work on my more intensive studies when they’re all asleep.”

As for advice for new and/or prospective students, she stated, “Don’t be scared to ask questions, attending university can be intimidating as it is, but when doing it online, sometimes you feel like you’re by yourself.  But the teachers and staff at AU have been incredible in answering any question I’ve had.”

When asked who in her life has had the greatest influence on her desire to learn, Ummara chose her husband Sami, whose support she credits for “where [she is] today.”

Like many students, Ummara admitted that online learning “was a little tricky at the beginning.”  She explained, “I wasn’t the most tech savvy, so it has been a learning curve.  I had to work on my typing speed, learning how to use Microsoft Word, learning how to make graphs when taking my tests.  But what I’ve liked is how I can take it at my own pace and how the community online is quite active, so I can engage with other students just as I would in a campus.”

As for her most memorable course?  “I’ll be honest, I just recently started so I haven’t had a lot of options just yet, however so far, I really enjoy economics.  Though my marks would say otherwise!”  And communications with her course tutors?  “I really appreciate how quickly they respond.”

If Ummara were the new president of AU, her first project would be “[f]ree cookies for every student!”

When asked which famous person, past or present, she would like to have lunch with, and why, Ummara chose “Malala Yousafzai, as someone who grew up in the same country as [her],” who “[she] see[s] her as a role model for all women.”

She also related her most memorable vacation to The Voice Magazine.  “The trip after my wedding, we went to north of Pakistan close to the Himalayas.  The night sky is something I’ll never forget,” she stated.

As for her most valuable lesson learned in life?  “Don’t rush things; be patient, what you want will eventually come to you.”  And her proudest moment?  “When I was featured in The Voice Magazine!”  She continued, “Countless proud moments have come into my life, but becoming a mentor/tutor for children with learning challenges was one of my favourite.”

On a final note, Ummara added, “I’m looking forward to my next few years at AU, and I hope to serve on the student council.”  Best of luck Ummara!

It can feel like you are all alone in your studies, but across the nation, around the globe, students like you are also pursuing their AU education, and The Voice Magazine wants to bring their stories to you.  If you would like to be featured next, do not hesitate to get in touch!