Articles
The Voice
Buying a Brand-New Car in Ontario? Aftermath. 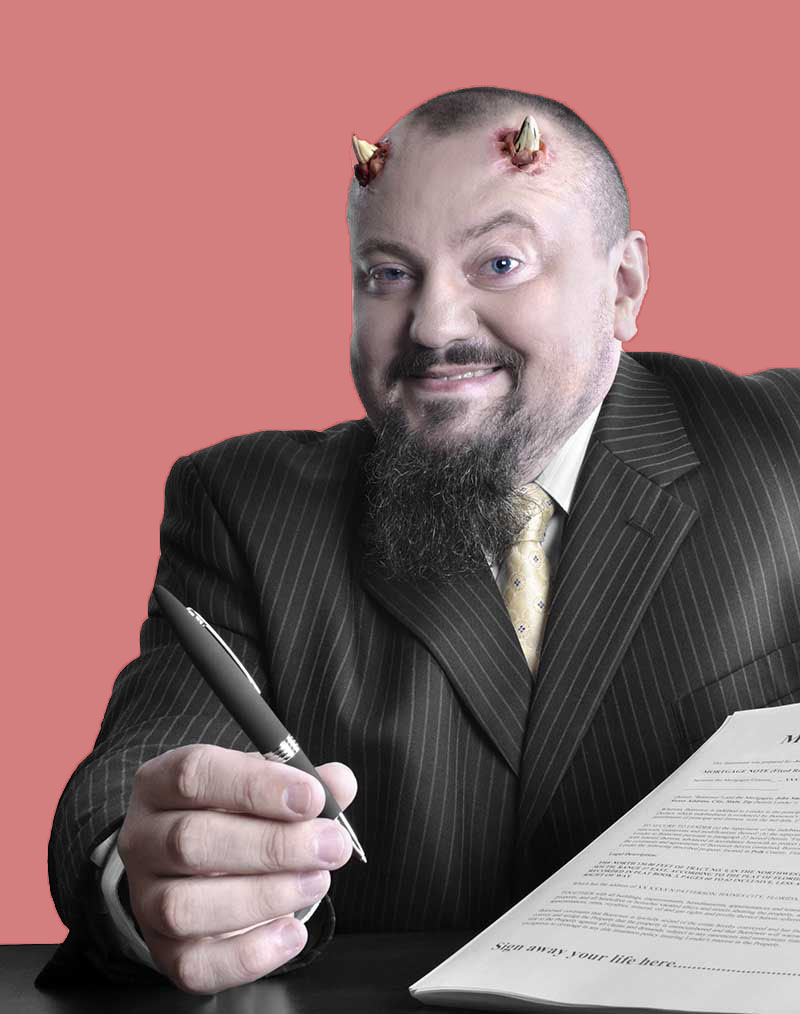 Last time in The Voice Magazine I wrote about a car sales dealership that was trying to oversell me on things I didn’t want.  My experience with that Nissan dealership was terrible and it resulted in me filing a complaint with the Ontario Motor Vehicle Industry Council (OMVIC).  My decision to file a complaint was reminiscent of a saying I was known for in elementary school, “I’m telling on you!” As an adolescent, I never really enjoyed telling on people but I did it because fighting was not allowed.  Now, as an adult, I still have that same mindset, except that instead of telling teachers, I am telling arms-length agencies responsible for oversight.  So, here is how my interaction with OMVIC played out.

What I Told to OMVIC

Being frustrated trying to deal with the dealership, I had to write to OMVIC: 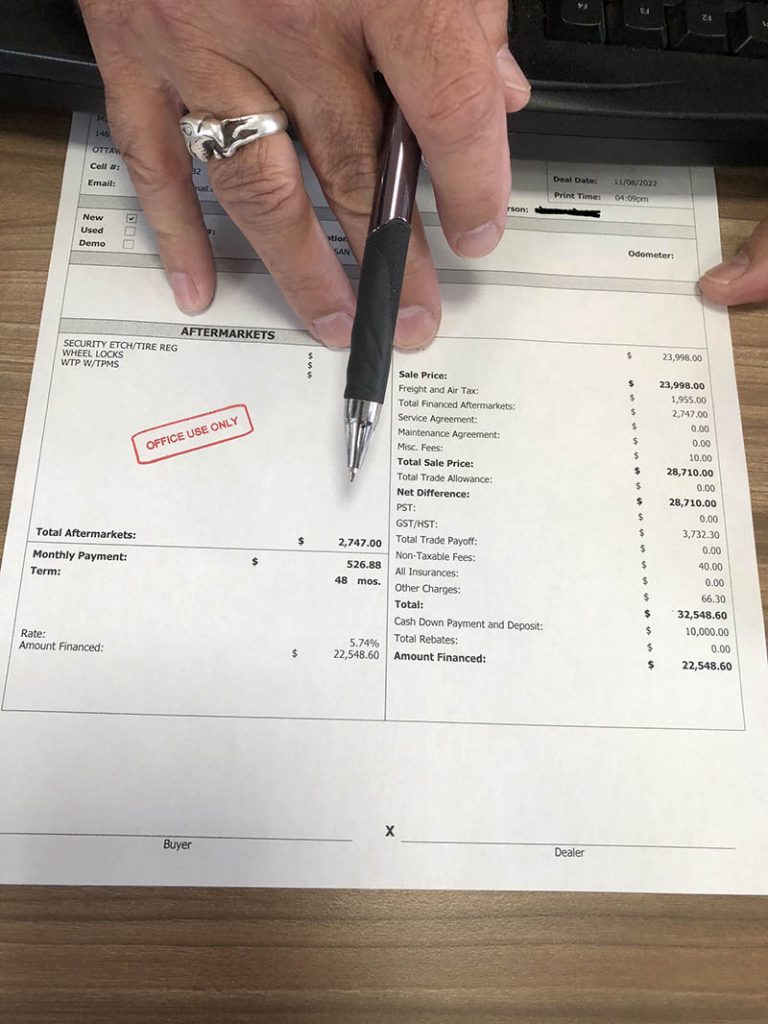 The unofficial bill with undesired “Aftermarkets”

I went into the dealership to place an order on a brand-new Nissan Kicks SV for their advertised price.  The sales agent confirmed the price for a brand-new Nissan Kicks was the same in-store as it was online.  However, the sales agent came out with an unofficial bill stating that I would be required to pay for window etching, nitrogen, and locking wheel nuts, if I wanted to be able to buy the car.  I informed him that I had a copy of an official bill [PDF] and that these “Additional Equipments” were unsolicited goods and unsolicited services, and that I was only going to pay the costs that were bundled into the advertisement price, and non-optional charges needed to read as being non-optional and not as “Additional Equipments”.  I explained that if I was buying a Nissan Kicks SV that was on the lot and that had already been etched/etc, that would be okay, but since I was ordering a car from Nissan’s factory, I wanted to forgo the Globali program and their “Additional Equipments”.  Upon hearing this, the sales agent started to question me about what I did for work, and when I told him it did not matter, he started lecturing us about why it did.  He then became very disrespectful and condescending when I returned back to the topic of price, telling us that it was “over” and that he did not know why we were going back to the price.

I ended up emailing the general manager of the dealership and he told me that they would not be accepting the “terms” I was placing on them and that I could buy that vehicle elsewhere after I told them I specifically wanted to buy the vehicle from their Nissan dealership.  The general manager refused to provide me with a clear answer as to whether they were refusing to sell me a Nissan Kicks SV that was still in a factory somewhere if I refused to agree to pay for the unsolicited goods and unsolicited services in their “Additional Equipments” category, that only get added when they are delivered from the factory.  The VP of the automotive group was CC’d in my email exchange with the general manager, and I also had a phone conversation with the VP.  During my phone conversation with the VP, I was told that all their vehicles were contracted to be etched by a third-party, for the Globali program, and that there was no way around it.  The VP also said that even if they could waive the fee, then they would have to go and do the same for every sale from past to present.  The VP said that if I wanted to buy a Nissan Kicks SV from any of their dealerships, that these “Additional Equipments” were the cost of doing business with them, or I could buy a car elsewhere.  However, when I asked the VP to have these costs listed as non-optional charges on our bill of sale, he said that was not possible.

How did OMVIC respond?

Here is the thing about OMVIC’s complaints process, the normal waiting period to hear back from them is usually between 24 and 48 hours.  However, it took OMVIC a full week to get back to me about my complaint.  Typically, longer wait times tend to be a good sign because most people that hear back from OMVIC between 24 and 48 hours tend to learn that their complaint was screened out.  What OMVIC told me is that my complaint had been noted under that specific dealership’s profile and that they would not be able to provide me with updates on any further reviews that may take place.

Although the contents of their email made sense, I still wanted some clarification on a few key questions.  First, I wanted to know whether OMVIC could clarify whether a consumer would have to agree to take unsolicited goods and unsolicited services on a factory order so that they could buy a car? It seemed to me that these charges were being forced upon me to buy a brand-new car, and that seemed to run counter to the Consumer Protection Act, 2002.  OMVIC’s response was that a dealer needs to be transparent about what is required for a sale and as long as they have itemized these costs clearly on the vehicle purchase agreement, it was okay, and it was up to the consumer’s discretions to determine if they wanted to follow through with the purchase or walk away from it.  Their response elicited my secondary follow up questions, why were these fees showing up as “Additional Equipments” on the bill of sale if they were mandatory and why did the VP of that automotive group advise me that they were unable to list their fees as “mandatory fees”? What was OMVIC’s position on the practice of printing unofficial bills that were obfuscating “Additional Equipments” fees and giving them the appearance that they were mandatory when they were additional costs that were optional? Think about it, there is no other industry which involves big-ticket purchases that will provide consumers with non-standardized “quotes” where the categories and language is completely different from the final bill of sale.

When OMVIC responded to my questions, their response was that they were unable to advise that the Motor Vehicle Dealers Act prohibited a dealer from making products or services mandatory with purchase and that I was provided a quote, and not an “unofficial bill of sale.” The charges appeared mandatory because the dealership constituted them as such.  After this, I put forward my final pair of questions.  If I was being provided a “quote” by this specific Nissan dealership, why was it so different from the information on “deskit.dealercorp”? “Deskit.dealercorp.” is a software that Nissan provides every Nissan dealer with.  It clearly outlines every charge, but not a single Nissan dealership I visited was using it to go over the costs associated with buying a brand-new car.  However, the reason I chose not to name drop the software earlier in our exchange was because I prefer to leave a few rounds in the chamber so that I can pull the trigger on any BS response.

Additionally, I asked to be connected with a member of OMVIC’s executive team because the conversation seemed to be too high level for OMVIC’s program administrator and because the executive committee had members who owned dealerships in Ontario.  By speaking with them directly, I knew that no part of my message would get lost in translation and that I could leave the executives with some thoughts to reflect on, but also because my knowledge of Nissan’s corporate procedures and protocols for dealers overwhelmed program administrator.  In the end, it was a productive talk, and I hope that they do something with my feedback because there is no reason why OMVIC has failed to create a standardized version for quotes or to require that a quote accurately reflect a bill of sale.  Misrepresenting costs on an unofficial quote in order to pass them off as mandatory costs is bad business.

How much money was I able to save?

Buying a car is a high stakes chess match

For some people, my approach might be too aggressive, too unflattering, or it might make them too uncomfortable to do it themselves, so these people can seek out organizations like Car Help Canada or similar ones.  They’re an organization that brand themselves as being able to negotiate the lowest purchase price of any vehicle.  Some people may also believe that having a long-term relationship with an official dealership is contingent on making concessions to the sales agent during the purchase of a vehicle and paying more for their car, but there is no connection between the two.  For me, buying a car is a high stakes chess match, and I know that no sales agent will ever have my best interests in mind.  I am not in the business of making friends, but I am in the business of filling my pockets with cash savings, and it is a mentality that many would benefit from if they adopted it.

When I think about the way I was underestimated by this Nissan dealer, it reminds me of the time when “Pikey” Mickey, from the movie Snatch, was underestimated by “Gorgeous” George.  For those wondering what happened to “Gorgeous” George, know that the film’s narrator says this about “Pikey” Mickey, “It turns out that the sweet-talking tattoo-sporting pikey was a Gypsy bare-knuckle boxing champion.  Which makes him harder than a coffin nail.” Now, “Pikey” Mickey and I have quite a bit in common like our love for “dags”, our knuckles speak for themselves, haggling is a part of who we are, and illegal bookies really hate us.  But neither of us could have imagined that the hunt for a vehicle would take us where it did, on an epic journey, and leave us with an awesome story to share.  I am just happy to know that my parents are happy with the deal they got, and that maybe others can learn from my experience to save big on their purchases too. 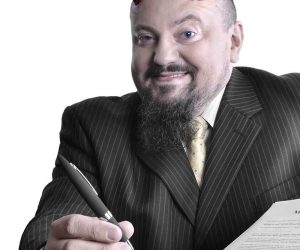 Buying a Brand-New Car in Ontario?