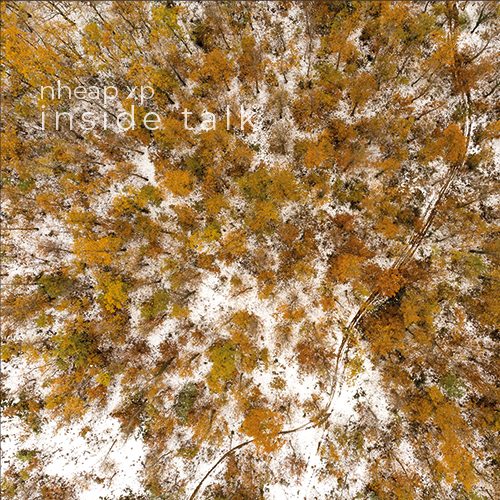 Nheap XP will be releasing his new album, Inside Talk, on January 15, 2023.  The album will be available for streaming anywhere you get your music.

Unfortunately, I couldn’t find very much information about “Nheap XP” other than what was provided by his music label:

Nheap XP is the moniker under which the musician Massimo Discepoli produces music which, in contrast to the more experimental and ambient music that he has been making under his real name for several years, is here instead inspired by club culture, pop, old and new electronics.  Featuring Natascia Verde’s beautiful voice on all tracks, the music on Inside Talk is feel-good, atmospheric, at times moody, full of angelic voices, danceable, sometimes kitsch, sometimes celtic, sometimes saccharine rich.

I wanted to compare the work of “Nheap XP” with Massimo Discepoli’s usual sound, so I looked him up too.  Massimo has much more information available connected with his real name, including social media pages, an actual bio on his music label page, and apparently a photography business as well.  Furthermore, from what I can tell, his regular music isn’t that different from what he produces as Nheap XP.  He also has Inside Talk posted on his real YouTube.  This makes me wonder, why bother with a pseudonym at all?  Does it not simply make it more difficult for fans to follow him?  I think it just comes off as a little pretentious.

After finding out more information about Massimo, I was actually very impressed with his background.  He’s from Italy, owns his own record label, teaches drums, is fluent in a variety of instruments, and has sold “easy listening jazz” songs to be used in commercials and movies.  I also thoroughly enjoyed many of the songs he has featured on his Acustronica webpage.  I watched the videos with my kids because he utilizes so many cool and unique instruments—they loved it!

Inside Talk consists of ten tracks: Inside Talk; Pleasure of Departure; Narrow Knowledge; Back View; Hold A Reflection; Wrong Echoes; Stubborn Response; Fighting The Wrong Battle; How To Disappoint Everyone; and End Talk.  Three of the songs, “Wrong Echoes”, “How To Disappoint Everyone”, and “Fighting The Wrong Battles” have videos on YouTube (although accompanying videos to all of the tracks will eventually be released).

I’m going to be honest—I didn’t get much out of this album.  All of the tracks are electronic soundscapes with sparse, distorted, airy vocals.  While it sounds pretty, I don’t find it very compelling.  It reminds me of any “lowfi study music” playlist that can be found on every music streaming service.  I’m sure Inside Talk would be great to have on in the background while you study.  Furthermore, the music videos for all three of the songs are the same, featuring drone shots of various places in nature.  Again, while pretty, it doesn’t exactly evoke emotion.  Is this album something that Massimo could sell to be used as background music on advertisements and movies?  Absolutely.  Is it something you really want to listen to on its own for enjoyment?  Probably not.

Overall, I didn’t enjoy Inside Talk.