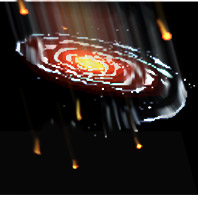 Do you know why gravity holds you to the earth? It is because you are falling towards the centre of the earth’s mass. It is actually a little more complex than that because the earth spins very quickly, and it also is falling around the sun. In turn, the sun itself spins, and it too is allegedly falling around a super massive black hole (SEE: http://science.nasa.gov/headlines/y2000/ast29feb_1m.htm) that lies at the centre of our galaxy.

Now I’m not too sure how it goes from here. Some people say that most other galaxies are moving away from our own galaxy; however, apparently a few galaxies are actually moving towards ours. Some of us may be familiar with the notion that sometimes galaxies collide and are forever altered by the effects of that collision. Researchers have used supercomputers to simulate such collisions. Over this past Christmas, I had the opportunity to see such footage as part of the film “Cosmic Voyage” (SEE: http://zeus.ncsa.uiuc.edu:8080/Summers/scicomp.html). It was an IMAX presentation, and so you can well imagine how spectacular these simulations were on such a large screen. It would appear that everything that exists in the universe is in the process of falling. Some things are falling away from other things, some things are falling towards other things, and some things appear to be falling around other things: it all depends on the curvature of space, or at least, this is what relativity asserts.

I’m not sure what all the clusters and superclusters of galaxies are falling towards, around, or away from, but perhaps that is one of life’s big mysteries. It may be that it might take a combination of our science and our spirituality to approach the hopes of discovering an answer to this enigma. Since all this motion is relative to everything else that is in motion, it seems to me that it is a combination of all this spinning and rotating and falling on behalf of all the strange and wonderful things in this world that keep our feet landing firmly on terra firma. It is a dance that all of creation is participating in, and we as humans dance this dance here upon our earth. But we are falling; we are all falling.

In some metaphorical sense, we can see ourselves as falling through life towards our death. If we use a pseudo-scientific metaphor as a way to picture time, then we can see time like a vector (which looks like an arrow in a plane, like this [ Ã  ], where the brackets mark off a space in some otherwise empty mathematical space, and the arrow marks the direction and location of the “vector” in that space). Many of us have likely heard the phrase “time’s arrow” or some similar expression which represents time as a direction; regardless, we all experience first hand the constant drive towards the future and the movement away from the past: we all feel the push from yesterday as an arrow hurtling towards tomorrow. It is with this sort of picture that we could easily imagine the vector of our moments traversed as pointing downwards towards a centre of mass”?a unity”?or at least as a dizzying orbit around such a mass. Again, what such a unity that centre might be is left as an open question for science to ponder, for religion to ponder, but I think more importantly, for each one of us to ponder in our own way.

It is likely that my friends would, at this point, want to accuse of me of “language abuse” for the way that I am using the word “?ponder.’ They would probably be upset with me because I intend “?ponder’ to cover such a broad sense of meaning, a meaning which goes well beyond the mere dictionary definition of “weigh mentally, think over.” In a sense, I use “?ponder’ as a very large metaphor, but perhaps even a synecdoche. I think, since this whole universe seems to resemble a huge and complex dance, that pondering could be carried out in any number of ways: by fishing, by mothering, by leading, by feeding, by thinking, by dreaming”?it could even be that pondering is the very cycle of our breathing: OM. But again, I think it is up to us to decide in which ways we are going to fall, with which steps we will trace out our dizzying dance. We each have, through living, an opportunity to ponder in our own way. It appears it is the responsibility of each individual to direct the course of his or her descent. We get to control the fall of spirit into flesh, the fall of flesh into spirit, for the direction of our vector is an arbitrary one, a choice made by our own definitions.

An interesting thing to note here is one of our cultural myths of a very important fall: the fall of Adam and Eve when they were exiled from Eden by God because they had eaten from the Tree that bears the fruit of The Knowledge of Good and Evil. In many stories, this fruit was an apple. Have you ever heard the story of how Newton discovered gravity (well, at least his version of it) when an apple fell out of a tree and hit him on his head? And did you know that one of Einstein’s thought experiments has him contemplate objects falling inside and out of trains and how they appeared in their motion relative to other observers in different states of motion? Isn’t it funny that in all of these stories falling seems to lead to some sort of knowledge? Putting patriarchy in it’s place (and the Freudian interpretation of a male God as a “big daddy in the sky” to bed), I think that apple in the garden of Eden fell out of the damn tree, and if Adam was any sort of human, he would claim his equal responsibility in deciding it was a good idea not to let it go to waste and that Eve and himself ought to eat it! Let’s get rid of the male dominated paradigm, let’s let both Adam and Eve take responsibility for each of their own falls”?in the same way that each of us needs to take responsibility for our own falls. And we can only do this by having knowledge of what is good and what is evil, so, as Martha Stewart would say, “it’s a good thing” that Newton discovered gravity in order for it to have existed when that apple fell out of the Tree and presented itself to Adam and Eve or else we’d all be left clueless without the ability to discern right from wrong; thus, we’d be unable to dance very well at all.

Anyway, it is not so much the story of Adam and Eve that is important, and it is certainly not the case that I am endorsing the Christian doctrine about how to live (but neither am I not endorsing it). What I think is important is that we are all falling and dancing through this universe as everything else is falling and dancing with us. Each dancer helps to create and shape each other dancer’s steps. We need to come to love to dance; we need to love in order to make the dance beautiful. We might be hopelessly falling, but we can make our decent into a version of our own Eden, if only we have the strength and courage to try. After all, they say there’s nothing better in life than falling in love.