Articles
The Voice
Working for the Railway 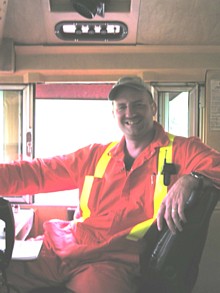 I began my railway career in April 1988 when I hired onto CP Rail in Cranbrook, BC as a trainperson (termed trainman in those days). I worked for CP Rail as a trainperson/yard-person for several years until qualifying as a conductor/yard-foreman in January 1992. In May 1993 I was offered a position as trainperson at BC Rail and it so happened that CP Rail was offering incentive severance packages to its running trades employees at the time. I took a buyout from CP Rail on a Friday and began working for BC Rail the following Monday. Nine months later, I had been accepted into the locomotive engineers’ training program and started my classes in January 1994. I was qualified as a locomotive engineer in May 1994 and have worked in that capacity ever since.

I can’t count how many people have commented to me, upon learning what I do for a living, that they had always dreamed of driving trains. I have had physicians and lawyers confide their childhood dreams of becoming locomotive engineers to me, much as others always wanted to be members of the police or fire services.

My father was a life-long railroader, although he was in management and not a member of the running trades. Throughout my youth he would comment that I should become a locomotive engineer based on the fact that he handed out many of their paycheques and knew that they made a very reasonable wage. Despite that, I never had any aspirations of working for a railroad. Actually, I never had any clear occupational goals at all. In hindsight, I suffered from what has been termed career drift“?the “phenomenon of entering jobs, occupations, and careers with little attention to planning” (Falkenberg, Stone, & Meltz, 1999, pp. 263-264). Although I enjoyed many intrinsic rewards from the jobs that I performed throughout my late teens and early twenties, the extrinsic job rewards left much to be desired”?low pay, few benefits, job insecurity, and frequent layoffs. By early 1988 I was fed-up with those factors and it was then that I heeded my father’s advice to apply to the railway as a trainperson. “Railway jobs are typically well-paid with good benefits and rail workers enjoy increased job security with accrued seniority” is what he frequently told me.

I had no idea whatsoever what a trainperson’s job entailed when I applied for the position, but when I was selected for an interview I began the process of anticipatory socialization, which has been described thus: “people develop an idealistic image of what it is like to work in a particular occupation. Such images are usually unrealistic, emphasizing the positive aspects of the work and ignoring its negative features” (Falkenberg, Stone, & Meltz, 1999, p. 208). I imagined a secure, well-paid career composed of riding trains and waving to passers-by as I rolled by them on sunny afternoons.

It was soon after I was actually hired by CP Rail that I began to experience reality shock, discovering that the realities of working for a railway are very different from my pre-employment expectations. The downside of railroading has many facets and a few of them include: 24/7 on call for many junior employees; senior employees enjoy a pseudo-schedule only, knowing the days that they will work, but not the exact times; frequent layoffs of junior employees; coercive managerial tactics that contribute to a psychologically poisonous us-versus-them mentality between labour and management (at CP Rail I used to joke that after putting prospective employees through rigorous pre-employment screening, management immediately began trying to gather evidence to dismiss those same employees the day after they were hired); seemingly endless hours of grueling and life-shortening night work; poor and worsening health and safety conditions; and I could go on and on.

There comes a time when money is no longer the overriding factor in a person’s work. It took me about ten years of railroading to overcome my instrumental work perspective, but once I did I came to the realization that I was entirely mismatched to my occupation. At that point I began to search for more intrinsically satisfying rewards which I was not finding in my work as a locomotive engineer. I began to get involved in the labour movement and took up university education which supported my Union work. In the very first article that I wrote for the Voice, I discussed my feelings toward my job: “after performing this job for six months I found it to be boring and intellectually deadening” (see The Voice, Vol. 9, No. 6).

I am absolutely determined to educate myself for a mid-life career change to acquire a job which I will find more intellectually challenging and suited to my personality and attributes. My wife and I have previously discussed my returning to school fulltime in order to speed-up this process and it just happens that BC Rail is now offering incentive severance packages to qualified locomotive engineers. Now is the time for me to depart from the railway industry. On Friday August 8, 2003, I worked my last shift as a locomotive engineer. After twenty years of continuous employment, one might expect that I would experience anxiety over such a move, but I can tell you that I feel as if a thousand tons has been lifted from my shoulders. I feel like the happiest person in British Columbia and I am ready to dig into my scholastic studies with renewed vigor. Only time will tell if my decision is financially sound; however, there is no doubt that, psychologically speaking, severing my employment relationship with the railway is the right thing for me. I hereby declare myself to be a fulltime Athabasca University student.

Wayne E. Benedict has a varied career history and strong links to the Canadian labour movement. He is working toward his Bachelor of Human Resources and Labour Relations at Athabasca University. For a more detailed writer bio, see The Voice writers’ feature page, at: http://www.ausu.org/voice/authors/authorfull.php?ID=7. If you would like to send article-feedback to Wayne, he can be reached at wayneben@telus.net.

The Dubious Privatization of BC Rail: The NDP Stance

The Dubious Privatization of BC Rail: The Liberal Stance