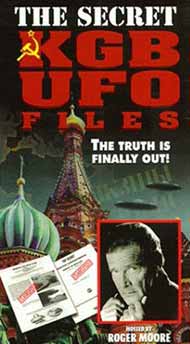 The month of December is dedicated to unique occult films that make me curious about interesting phenomena. The world is filled with interesting mysteries and some people have actually sunk money, time and energy into trying to unravel them.

The first of these unique projects is one I picked up in a cheap DVD bin for about 7 bucks. I figured it was worth a laugh but the laugh was on me. Former James Bond himself, Roger Moore, narrates the TNT television special. The still handsome Mr. Moore shows us some startling film footage and careful research.

The film depicts the fiery crash of a UFO (let me be really clear. I’m NOT saying extraterrestrial craft I’m saying “unknown flying object”). This object supposedly smashed up in Russia in March of 1969. In the film footage (a chunk showing footage of the interior of the craft is still not found and released to the public) we can see a troop of Russian soldiers arrive and take orders to guard while the craft is filmed and investigated. Two cameras document the event and then the fun begins. The TNT project picks apart the film we see. First, they ask the questions we need answered: Is this an authentic 1969 film with real Russian soldiers? The weapons, film and clothing are analyzed as well as the surrounding areas, by experts of Russian culture. This impressed me. The experts say that the film itself is marked with a clear marking from a known Russian film lab. The weapons are dated and analyzed as proper era Russian weapons. The clothing is correct-issue for the era and the use.

Next is amazing footage of a Russian MIG fighter jet apparently chasing a UFO. Then, just as the MIG pilot is told to lock on and shoot down the UFO, the jet itself is destroyed by the unknown craft! The pilot clearly moves inside the cockpit and the footage seems eerily real. I sat amazed. I then became curious. What did they tell the widow of the MIG fighter pilot? What happened to the remains of the craft? How did the UFO knew the MIG was going to fire on it? Were the occupants monitoring the human conversations? Did they have to contact their own chiefs of command prior to shooting down the earth fighter craft or were they simply told, “defend yourselves if necessary”?

In a most interesting twist we then see a Russian version of the alien autopsy film that became such an American controversy. There are some SERIOUS differences between the Russian and American versions. The American film footage had the team covered in sterile white gowns, gloves, mask etc. The film was later decided to be a hoax for one reason–which annoyed me: the fingers used on an instrument in the autopsy by the surgeon were incorrect! Hmmm ok. I remember clearly watching the finest Hollywood special effects people puzzle over how the cutting and slicing were faked on the film. These effects masters stated, on film, that they couldn’t create those effects to this day, and yet the fingers were wrong with the autopsy tool so it had to be a fake! Moan…

In the Russian version there wasn’t much left of the apparently purplish carcass (no head, legs or hands) and the torso yielded little information on camera. The people attending the autopsy were ungloved, and mask-less. The TNT experts were asked if this made any sense and they stated that it was standard because of the poverty experienced in Russia. They also showed more modern footage from a well known medical establishment that seemed to prove where the autopsy took place. To quote Star Trek’s Mr. Spock, “Fascinating.”

This film is still available on DVD and despite the sound quality going up and down in my copy I recommend this for anyone fascinated by mysteries. There are many interesting moments and Roger Moore does a great job of being relaxed and asking the right questions for the viewers.

Look at this website for more information and some great still photos: http://ufocasebook.com/russia1969.html