Athabasca University students come to the ?classroom? with different life situations and different challenges. First-year Bachelor of Arts in Humanities student Sara Windross’s particular challenge is studying while dealing with cerebral palsy. But despite any difficulties her condition has sent her way, She’s focused, organized, and thrilled that distance education with Athabasca University has allowed her to rediscover the joy of learning.

Cerebral palsy is a physical condition affecting the muscles and joints. For Sara, classified as having spastic cerebral palsy, certain muscles and joints have become rigid and cannot relax. This means that, for example, Sara is not able to type with both hands, and needs a wheelchair to get around.

However, she doesn’t feel that her cerebral palsy is affecting her educational experience significantly; in her mind, It’s no different than any other personal or family issues students might face. ?I don’t see CP as a disability, it’s just a challenge,? she says.

Physical limitations do require her to move at a slower pace. ?I type with one hand,? she says. Putting together an assignment may take a few weeks, but Sara is steadily working through the program, taking one course each term.

Currently, she has been studying with AU for more than two years and is nine credits into the program. Since she hopes to work as an editor someday, She’s planning to change her major to English to gain the background she’ll need for that career. 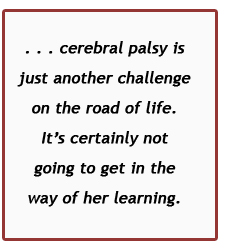 Sara has found a good resource in AU’s Access to Students with Disabilities office (ASD), which works with eligible students to streamline their education process. ?ASD has made it very easy,? Sara says. For example, she can go through ASD to request a free course extension. ?I never worry about getting behind in my course load,? she explains.

Sara discovered AU when she began looking at education options. Distance learning was an easy choice; Sara was familiar with independent study after having been homeschooled for several years. Better still, the delivery method was well-suited to her needs.

?I always wanted to go to university,? she says, but the local university wasn’t a possibility due to accessibility concerns. ?[It] is on a hill, so that presents challenges for me,? says Sara, who uses a motorized wheelchair.
AU and distance study were a good solution, and so far, It’s worked well for Sara. ?I’m a very dedicated student,? she says. ?I don’t have a nine-to-five office job . . . [but] I take my course work just as seriously as one takes a job.?

To stay focused, she approaches things very methodically, dividing courses into subsections to compartmentalize the work. ?I like doing that so I don’t feel overwhelmed,? she says. Sara also knows the importance of having a dedicated space: she does her classwork in a private room, which minimizes distractions.

One challenge she finds easy to deal with is procrastination. Keeping her sights on a long-term plan helps. ?When I want to procrastinate I think about how much I really want to earn a degree and the feeling disappears,? Sara says.

For Sara, the strongest motivator is the fact that She’s now able to enjoy studying again. When she attended public school as a child, her interest in learning declined when she fell behind.

?The grades were moving too quickly, [and] I couldn’t keep up with the work,? Sara says. ?[It] led me to resent learning.?

As an AU student, She’s now able to control the pace of her studies, giving her the chance to appreciate and enjoy school for its own sake. ?AU has helped me rediscover my love for learning,? Sara says. She’s enthusiastic about her studies and hasn’t ruled out graduate school in the future??if I still enjoy school!? she says.

To Sara, cerebral palsy is just another challenge on the road of life. It’s certainly not going to get in the way of her learning.