?. . . angelheaded hipsters burning for the ancient heavenly connection to the starry dynamo in the machinery of night,
who poverty and tatters and hollow-eyed and high sat up smoking in the supernatural darkness of cold-water flats floating across the tops of cities contemplating jazz . . .”

Years ago, in some glossy magazine, I saw a photo spread about apartments of eminent New Yorkers. I was grudgingly admiring the good taste and luxuriance of the pieds-à-terre of famous actors, designers, and socialites, when suddenly there was a photo of poet Allen Ginsberg’s apartment, with nothing but steel shelves, an old couch, and stacks of books. Suddenly the posh apartments looked absurd, the abodes of vacuous poseurs. 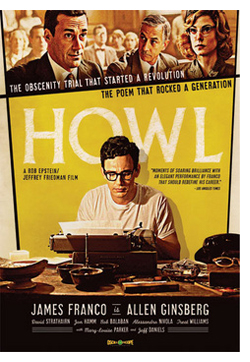 Ginsberg was all about being authentic. In the film?in which the portrayal of Ginsberg is amazingly close to the truth?he makes a poignant defence of authenticity, of not striving for ?good? literature so much as striving to write from your own being.

Authenticity is also one salient aspect of the Mindful Bard philosophy. It’s futile to strive for superiority when the only real good you can ever do with your art is to bring up the treasures of your own individual consciousness as a response to suffering. Ginsberg arrived at authenticity in a number of ways, and his knowledge was hard-won.

For one thing, coming to terms with his homosexuality forced him to examine himself, to recognize the significance of personal identity, and to develop a firm personal stance in the face of the storms and tempests of public opinion.

It wasn’t just at the famous obscenity trial in 1957 that Ginsberg’s literary talent was questioned. On a first reading, his lines often appear to be rambling, pointless, and self-indulgent, and his style spawned a thousand pale imitations that eventually became fodder for spoofs of beatnik poetry from Captain Beefheart to The Munsters. Was his poetry really any good?

Sometimes you want to say, as did Mark Volman about Frank Zappa, ?He’s not a genius! I know the difference between a genius and someone who’s had too much coffee to drink!?

I only know that the race is not to the swift?It’s not necessarily the best poet who achieves cultural ascendancy; rather, sometimes It’s the most passionate and insightful poet, the poet who, even in the age of Moloch, keeps one finger relentlessly fixed on the primal pulse.

Another significant factor in the development of his ideal of authenticity was the fact that Ginsberg wasn’t published right away. In fact, he had assumed he could not be published, which gave him a degree of creative liberty not afforded laureates. He also confessed to wanting to grab the attention of buddy Jack Kerouac, who only perked up at poems that were in essence raw expressions of real feeling. Ginsberg soon realized?publishing standards and repressive laws be damned?that this was in fact what readers really wanted.

As for this film, it was a tall order to recreate the tenor of late ?50s bohemian America. But it succeeds in maintaining enough similitude to boomer memory and Robert Frank’s black and white photos and footage to create a nostalgic but relevant depiction of this seminal event in American cultural history. 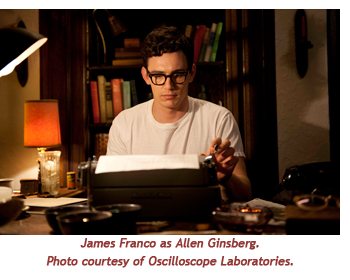 Though the film loses points for using big band jazz and New Age music (as opposed to the more historically accurate Hawkins, Davis, and Coltrane) the smoke, the clothes, the mannerisms, and the overcrowded coffeehouses are richly redolent of those tortured but engaging times.

Black and white film and dated interiors are what you’d expect with this subject, but something unexpected and quite wonderful about this film is the highly symbolic animated segments illustrating the imagery in the poem Howl, a rhapsody of magical sound and images highly suggestive of the poet’s gruelling cultural role.

To its credit, the film isn’t just about coming out of the closet, although sexual marginalization clearly parallels the poet’s role in the capitalist age.

This film can stand proudly in the company of the handful of films based on poems (including Beowulf, Braveheart, Helen of Troy, and O Brother, Where Art Thou?), and the time is ripe for a film that gives such a brilliant reinterpretation of “Howl”. Now that the blatant homosexuality and the raging critique of ?50s America seem less appalling, It’s easier to see the poem’s enduring relevance to the postmodern world.

Howl manifests nine of The Mindful Bard’s criteria for films well worth watching: 1) it is authentic, original, and delightful; 2) it harmoniously unites art with social action, saving me from both seclusion in an ivory tower and slavery to someone else’s political agenda; 3) it provides respite from a sick and cruel world, a respite enabling me to renew myself for a return to mindful artistic endeavour; 4) it is about attainment of the true self; 5) it inspires an awareness of the sanctity of creation; 6) it displays an engagement with and compassionate response to suffering; 7) it gives me tools which help me be a better artist; 8) it makes me want to be a better artist; and 9) it makes me appreciate that life is a complex and rare phenomenon, making living a unique opportunity.

The Fly on the Wall—A Glimpse At The Future 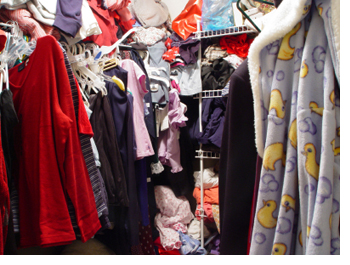