If you’ve ever read a Western, you’ve probably encountered the passage where X marks the spot: the scene where an uneducated character makes his “mark” on a contract (and usually needs someone to point out where to do it). For centuries, good handwriting denoted a certain refinement, a higher level of education and class. But in a world That’s embraced digital communication, is handwriting a skill That’s even needed anymore?

Yes, according to several experts—and not because your perfect Palmer-style cursive is going to land you a plum job. Instead, learning cursive triggers parts of the brain in ways that digital communication simply can’t match.

The benefits affect our “thinking, language and working memory–the system for temporarily storing and managing information,” according to a Wall Street Journal article. In that article, Virginia Berninger, a professor of educational psychology at the University of Washington, notes that pressing a letter on a keyboard doesn’t activate our brains to the same degree that handwriting does.

In fact, nothing seems to quite match the physical act of forming those shapes on paper, and there are brain scans to prove it. In a study conducted at Indiana University, kids were taught their letters in one of two ways: either by simply looking at them, or by printing them by hand. After the lessons, a functional MRI scan analyzed neural activity in the kids’ brains. When shown the letters during their MRIs, the kids who had practiced printing had “far more enhanced and ‘adult-like'” neural activity than their counterparts.

Karin Harman James, assistant professor of psychology and neuroscience at Indiana University, led the study, and she told the WSJ that “it seems there is something really important about manually manipulating and drawing out two-dimensional things we see all the time.”

It’s not just kids who benefit, either. In another study, adults who practiced printing or writing characters in a new language (or even new math symbols) had “stronger and longer-lasting recognition” of those characters when compared to the retention shown by learners who typed the characters on a keyboard.

Besides the cognitive advantages that handwriting provides, it also improves the speed and quality of written work. It might seem counterintuitive that handwriting could ever be faster than cutting and pasting on a computer. But in a 2009 study, Professor Berninger and her colleagues discovered exactly that.

In this CBC article, Berninger noted that the study tested students on their ability “to complete various writing tasks?both on a computer and by hand.”  When using a pen and paper, participants had a faster word-production rate, wrote more complete sentences, and even wrote longer essays.

So does that mean we should forget about all the benefits that come with digital learning tools, or go back to the days of ink-stained fingers? No, and in an interesting twist the Wall Street Journal notes that the practice of handwriting is getting a boost from “new software for touch-screen devices, such as the iPad.”

Apps for kids encourage them to trace the shapes of letters on the screen, while more sophisticated programs can help adults relearn the cursive skills they’ve forgotten.

Indeed, technology may just offer the ideal combination of memory-enhancing tools, giving us beautiful handwriting without the need for all that scrunched-up paper in the trash can. Now if only they had a way to eliminate writer’s cramp.

The Mindful Bard – Poscards from the Edge of No Exit 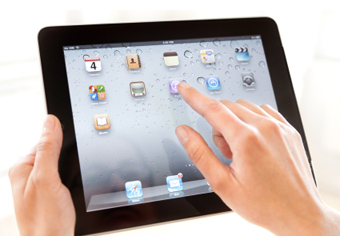