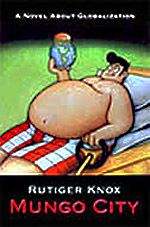 (CUP) It’s not hard for a book to draw your attention when the cover features a greatly obese man with a pompadour licking his lips and lying mostly naked on what appears to be a bed with a steering wheel, holding a hamburger with a tasty planet Earth “patty.”
Mungo City, the first novel from Canadian resident Rutiger Knox (a name that sounds suspiciously like a pseudonym), features this attention-garnering cover, as well as a terrific story about the potential extremes of globalization.

The cover of the novel clearly seeks to make some comment about consumption, an idea that is a large part of the novel itself. The book follows its main character, the irrepressible and dim-witted Jimmy Doodle, through a series of adventures that expose the degeneration of the world he lives in.
In Jimmy’s time, cities and civic government have eroded to the point that they can no longer afford to maintain themselves. The only way cities and people can survive is to accept the extreme of globalization; to let corporations sponsor cities (for example, Starbucks City, AT&T City).

Under Corporate Rule, the CEO of the sponsoring company becomes the mayor of the city; the homeless are driven out of the city by insult-hurling Megaphone Men. Everything from education to job placement to living quarters are found and paid for by the city’s sponsor. So-called “free thinkers” (those who oppose the Corporate way of life) are forced to leave the city, given the option of heading either to The Woods or The Abyss.

The Woods are a licensed trademark of The Woods Group Inc., a non-profit group dedicated to licensing all the land it feels fits the description of the woods; The Abyss” is the term given to any area of the world that still practices democracy.
This is just one example of Knox’s warped vision of the future. The entire novel is laced with details about life as a corporate minion, which give the story depth.
Jimmy needs to get his life back on track, so he goes to visit the Life Unscrewers; he becomes a member of the Mafia, only to accidentally blow the gangs’ cover after he finds out that they’re practicing the outlawed art of mime (a crime punishable by death); he is banished to The Abyss where he gets involved with an anti-corporate cult led by a 900-pound bedridden Fatman named Leudork (bed races by the Fatmen are the national sport and the preoccupation of the Abyssians).

Knox’s writing has flair and style that makes it hard to believe this is his first novel. He takes a subject that has previously only been the topic of deathly serious academic research studies and coffeehouse discussions and has entirely too much fun with it.

Being that this is a heavily satiric novel, it might be expected for the author to fall into the trap of heavy-handed preaching against the evils of globalization. However, when Knox does seek to make a prominent point, he deftly works it into the plot by giving a detailed background of the situation and always remembering to keep the humour near the top.

Mungo City is a resoundingly fun novel that is heavily conducive to page-turning and late-night reading. It has a creativity that makes a potentially difficult subject into a fun read. As long as you’re not afraid to learn something, that is. 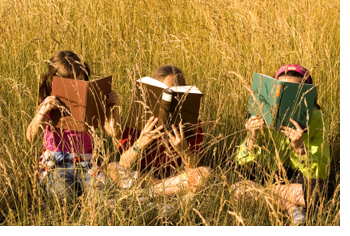