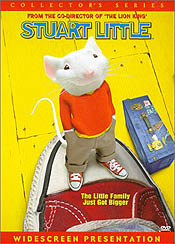 Heart-warming. In a nutshell that’s what this lovely story is. Did you know that author E.B. White also penned Charlotte’s Web? Also the film director co-directed The Lion King. So Stuart Little is bound to get you or your children’s attention. The original story is more than fifty years old but the 2002 film has had such success that a sequel has already been made. The sequel too is really well done and is currently on cable TV in Alberta.

Mr. and Mrs. Little (Hugh Laurie and Geena Davis) open up this film in their idyllic little home in New York City, “the home that every Little can find even if they’ve never been here”. They have one son, George (Jonathan Lipnicki). He is anxiously awaiting the arrival of the little brother they are going to pick out from an orphanage.

At the orphanage they try to select the right child for their son, but they fall back on a bench overwhelmed at the huge selection of children. From below them comes a voice”?of a mouse. The mouse, Stuart Little (voice of Michael J. Fox) is a very relaxed, personable little guy. He’s able to tell them all about the children in the orphanage: so and so speaks French, so and so can skip rope a hundred times:. Stuart also wears the uniform the rest of the children wear but is just — well — smaller and a bit different. But as Stuart says, “when it’s right you just know.” And so Mr. and Mrs. Little adopt Stuart and bring him home — mini suitcase in his little mouse hand.

George comes running home from school excitedly asking about his little brother. Yes, the Little’s inform him he is here. Then they look down: way down. George thinks it’s a joke at first. Nope. The Little’s give him time to adjust.

What a shame Snowbell doesn’t give Stuart time to adjust. The handsome white cat jumps up on the hall table and promptly gobbles up the mouse. Tail still wiggling in his mouth, Snowbell is scolded by the Little’s and ordered to drop “the family” on the ground now. So, a little annoyed, Snowbell does as he’s told. But soon “Snow” becomes our troublemaker:or should I say, Stuart’s troublemaker. It is understood that a cat might have a pet mouse, for about five seconds, but never a mouse with a pet cat! This is not tolerable to Snow. At first he decides to handle this himself, but it gets a little tough. Stuart doesn’t drown in the washing machine like he should. He doesn’t effectively hide when Snow’s buddy cat shows up unannounced and then the whole neighborhood knows about Stuart! That’s too much! Stuart must go! Of course if nice little housecat Snow were to try to “scratch” Stuart himself he might muss up his fur. That will not do, so he visits a tough alley cat and arranges for the problem to go away.

This leads to the introduction of Stuart’s “parents”. They arrive at the happiest moment in the family since Stuart arrived. Since Stuart was not exactly what George imagined as a little brother he has a lot of trouble accepting him. That is, of course, until Stuart saves the day and helps him win the local toy yacht race! As of that moment George and Stuart became brothers. The problem is the brothers haveto split up so Stuart could go home and live with his “real parents.” A short while later Mrs. Keeper from the orphanage comes by and tells the Little’s that Stuart’s family has died in a 2 for 1 soup accident in a grocery store. That is wonderful to the Little’s since it means that Stuart can come back to them. Mrs. Keeper wonders what they’re talking about and informs them that Stuart’s family died years ago. Since “his family” picked Stuart up three days ago this causes some problems.

The Littles go to the police but only wind up with a horror story — the problem is, if they haven’t received a ransom demand they aren’t go to see Stuart again!

George becomes impossible to comfort until he decides to search for Stuart. They hack out the family photo to get Stuart’s photo and print thousands of posters. Everyone runs around town trying to find him.

Well in the meantime something cool is happening in Stuart’s new home. I won’t tell you what but I will say watch this film and cuddle up with the kids. You’ll all love it! In case you happen to be like me and just happen to appreciate PG entertainment and have no children:just cuddle up and enjoy. 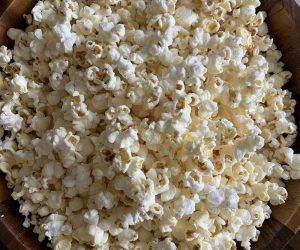