With all the turmoil people are facing on the economic front these days, taking time to give blood may not be high on their priority list.

It may not be the only reason people aren’t donating, but Canada’s national blood inventory is now at a critical shortfall. In the past two months alone, the on-hand reserve for the most common blood types has dropped more than 40 per cent.

As the CBC reports, the Canadian Blood Services notes the shortage means ?hospitals may have to delay treatments or postpone elective surgeries.?

?It may surprise Canadians to know that even in good times, we only carry four to six days supply of blood to meet the entire country’s needs,? said Dr. Graham Sher, CEO of Canadian Blood Services.

The supply of the most critical blood types is now at a two-day supply, says Sher, and that puts Canadians who depend on it ?in a vulnerable position.?

As many as half of Canadians are estimated to be eligible to give blood, but in 2008 only one in 60 have donated. These numbers reflect the recent change in supply and demand. Since 2005, hospital demand for blood has risen by 3.3 per cent. At the same time, the number of donors has dropped by 0.7 per cent.

The agency has heightened recruitment efforts, but in order to ensure enough blood for emergencies or natural disasters, supplies to hospitals are being rationed.

Since 2007, the tiny, oil-rich nation of Qatar has attained the highest per capita income in the world. But in spite of its skyrocketing oil and natural gas revenues, officials there are warning about the risks this high growth rate brings.

The Gulf Times quotes Dr. Ibrahim B. Ibrahim, secretary general of the General Secretariat for Development Planning, speaking at the launch of Qatar Vision 2030, a two-day international seminar.

It’s a smart approach, and the effects that Ibrahim warns about may soon be seen right here at home in the oil sands of Alberta: with exports expected to be the front line in the current economic downturn, many homeowners who bought at inflated prices could be left staggering under high mortgages if oil-sands wages decline. 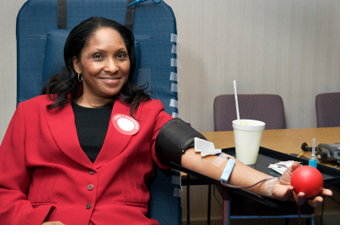